Mahler Von der Jugend - what the garden tells me 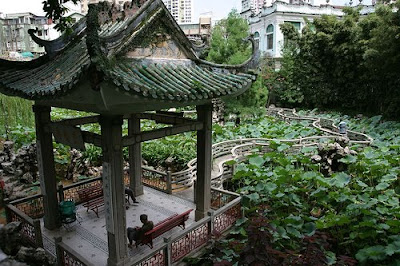 This is a pavilion in the Lou Lim Lok Gardens in Macau. It's nothing very special, just a 19th century merchant's, nothing like the fabled classical gardens in Suzhou, some of which date back a thousand years, but it's nice. Many years ago I did a big project there to illustrate Mahler's Das Lied von der Erde, getting shots at dawn, before the tourists came, timed to when the lotuses were in full bloom. And now I can't find the file!

There are many pavilions in the garden, but this is the one in the middle of the lotus lake, reached by a beautiful walkway that curves and bends nine times. The idea is that you approach the pavilion not by a straight route, but one that makes you ponder the different vistas you see on the way. Gradually you shed the cares of the world til you reach the pavilion where you can be at peace. The whole concept of Chinese gardens is that you follow paths that reveal different aspects as you move around. With each turn you see things from different angles, perspectives. You're not supposed to see everything at once.

Each day, different vistas. This photo, by Cody Chan, is probably May, before the lotuses come into flower. Already, though, it's hard to tell that under all that greenery, the ground is not solid, but water. Illusion again. In winter you see the water and the outlines of the lovely walkway, and "landscape rocks" in amazing shapes that look like distant mountains. (you can just spot one of them in the photo on right of walkway). But the lotus roots live on, hidden, under the soil at the bottom of the lake, waiting for spring. So already embedded is the idea Die Welt schläft ein!.

Although Mahler's poem refers to "white porcelain", the glaze used in South China is almost always green, bluey-green, sometimes varied with ochre yellow, but blue green is the colour of nature and renewal. 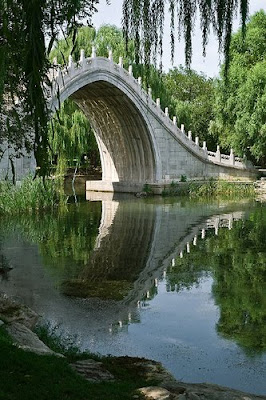 Throughout China there are bridges which arch steeply over water, so their reflections form perfect circles like the moon. The idea is a solid structure defying gravity, yet uniting air and water, reality and illusion. So "wunderlich im Spiegelbilde", amazing mirror images, "Alles auf dem Kopfe stehend" Everything stood on its head.

Even as the friends sit happily in the pavilion, drinking and chatting, everything they take for granted is reversed in the reflection in the water. Nothing, however precious, remains unchanged.

Ten years ago I went to a lot of trouble getting the photos of the garden set up at just the right angles, just the right light and timing. Now they're lost. But I couldn't be writing this now if I hadn't learned then about the metaphysics of Chinese gardens. Besides, losing all that work expresses the spirit of Das Lied von der Erde. Material possessions are ephemeral. What counts is what you carry in your soul.

Please read my other posts on Das Lied von der Erde, especially the one on the literary sources and cultural icons, which is HERE. Eventually I'll try to do more, so what I've learned will help others when ich wandre in die Berge.