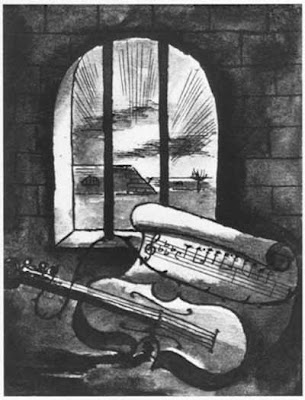 Why would people write and perform music in a concentration camp ? As Viktor Ullmann, who was at Terezin but was murdered at Auschwitz, wrote: "We did not simply sit down by the rivers of Babylon and weep but evinced a desire to produce art that was entirely commensurate with our will to live".

Last week I was at a recital at the South Bank.The audience was very mixed, young and old, music regulars and people who don't usually go to concerts. The programme notes were minimal, because the performers talked about the music and read the poems in the songs, in English. It was much more personal than an ordinary recital. I didn't much like the CD but I loved the recital, because of its informal, direct format (and better choice of music). Read about the concert HERE. Quite a lot of detail about the music and background not that easy to come by. Read about Karel Berman's Reminiscences, which I'd really like to hear Forsberg record in full. Also Erwin Schulhoff, and the amazing Viktor Ullmann of whom I'll be writing more at some stage (a favourite).

The sketch is by Bedrich Fritta, an artist in Terezin, who made this drawing in 1943.

There's more on Terezin music and music suppressed by the Nazis on this blog, follow the label Entartete Musik
at October 07, 2009