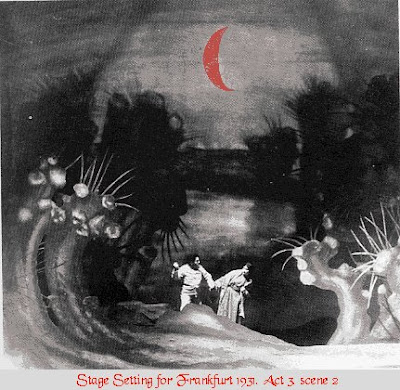 Alban Berg's music is so visual that a semi-staged performance of Wozzeck could be a great chance to watch the music unfold. Under Esa-Pekka Salonen, the Philharmonic Orchestra played vividly, as if inspired by the patterns, fogs and mazes in the music. Their performance was exceptional: better almost than the stunning Gurrelieder earlier this year (Read about that HERE and HERE), especially part 2 as the CD is out now)

Wozzeck demands great orchestral forces, so the singers were squashed into barely a metre between the orchestra and the Royal Festival Hall's platform edge. Since so much in Wozzeck relates to being squashed, marginalized and oppressed, it might have been possible to turn disadvantage to good dramatic effect. Perhaps that was asking too much as this production, directed by Jean-Baptiste Barrière, wasn't much focussed on meaning or, for that matter, on the opera itself.

Behind the orchestra was a huge screen on which a kind of film was projected. Berg and cinema go together well, as I've written many times on this site, but form is not enough. Had the projections been properly designed the idea might have worked. Instead we had a random series of oil on water transparencies, purposeless colourwashes transposed on soft focus close-ups of the singers. It's a psychedelic trip, but to where? A red orb fills the screen in the third Act, representing the red moon, but it has little dramatic impact in context with what has gone before.

The action takes place in a garrison, cut off from the real world. Why? Berg hated the pettiness of military discipline. The army in Wozzeck represents illogical rigidity, rules that mean nothing in themselves. It doesn't actually matter what the men wear, what matters is how the idea is conveyed. These soldiers looked worryingly comfortable, like public schoolboys in casual dress. Simon Keenlyside's natural elegance and grace is just too civilized for Wozzeck, no matter how well he sings the role. He's capable of fully inhabiting a role, given the right direction, but here he wasn't called on to be anything "but" Simon Keenlyside in khaki chinos.

Katarina Dalayman has created the role many times, so we know she's capable of making Marie a complex and intriguing personality. Here she wasn't called on to fill out the dramatic demands, so her characterization was featureless, through no fault on her own.

Margret (Anna Burford) was dressed like a Sloane, hair perfectly combed with diamante band. Maybe the costume is supposed to say something but it's not clear how it relates to what we know of her in the libretto: she's sassier than Marie, which is maybe why she wears scarlet but everything about her hair and demeanour say otherwise. Again, a good singer not called on to show her true mettle. Similarly, Peter Hoare as the Captain and Hubert Francis as the Drum Major could have been supported by dramatic direction equal to their vocal abilities. As for Hans-Peter Scheidegger's Doctor, there's more to the part than a rictus grin and a stethescope.

In the end. Marie's child appears immaculate in emerald green silk pajamas. He enters following a processsion of children (much older than himself) dressed in black, like a cortege. This sudden formalism contrasts with what's gone before. What does it mean? Are the silk pajamas meant to suggest a different future for the boy? We don't really know, but from the score, it's clear he's in a difficult situation,. A visual image needs to be supported by other things. In the absence of anything to reinforce what the silk pajamas may suggest, chances are the boy will end up just like Wozzeck, "Ringel, ringel Rosencranz": Berg's indicating a ring, a circle, repetition.

While Berg is portraying disordered minds, his music isn't disordered or disorganized. Indeed, what gives it its power is the tension between extreme order and wildness, between OCD-type compulsiveness and derangement. Semi-staging can be powerful, since concentration increases intensity. This was more decor than drama and might have overwhelmed but for the tenacity of the singers and the superb, uncompromising brilliance of Salonen and the Philharmonia. Indeed, they were playing so vividly, that you could hear how well Berg characterizes solo instruments, the soloists functioning like individuals in a drama of sound. Plenty of "opera" in the orchestra to watch if you want.

Subsequently, I've been wondering about why, given that this concert was the last in the Vienna City of DXreams series, why they didn't choose a designer with a track record in Viennese theatre history ? Vienna 1900-1930 (the theme of the series) was a time of major innovation in theatre arts and design - Alfred Roller etc. -but this seems to have been completely overlooked for whatever reason. What a lost opportunity this series has been, in the sense that it could have been genuinely informative and enriching. Musically, though, Salonen and the Philharmonia delivered the goods.
The performance was recorded and will be broadcast on BBC Radio 3 at 7.00pm on Thursday 15 October. Do listen! Please also read about aboutt the Wozzeck film from Hamburg which I wrote about earlier. These are "first thoughts" though, written after a long, hard day. HERE is the final version, written for a stage oriented readership in Opera Today.