Unknown Elgar - Fringes of the Fleet 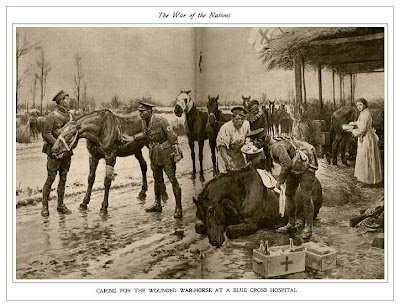 "Concerning the war I say nothing - the only thing that wrings my heart & soul is the thought of the horses - oh! my beloved animals - the men - and women can go to hell - but my horses; - I walk round & round this room cursing God for allowing dumb brutes to be tortured - let Him kill his human beings but how CAN HE?
Oh, my horses."

So wrote Elgar in August 1914 before the horror of the Somme and the trenches. It would have been less conscionable had he written it later. "O my horses" is the title of a book of essays on Elgar and Kipling published earlier this year. Read about it HERE on an interesting WW1 blog. Hard as such values are to swallow now, that was how people thought in those times. Don't even ask what that lot thought about non-white people. But in reality not all that much has changed; we just have different demons now. And more sophisticated methods of destruction, control and surveillance.

Elgar wrote a number of songs to Kipling's poems. Perhaps his heart wasn't in them, as they aren't among his masterpieces. At the time the songs were immensely popular and Elgar toured the country conducting them, rather like a rock star tour. Next time you sit in the ENO at the London Coliseum remember that on that same stage in 1917 these songs were presented as part of a music hall programme complete with comedy songs! One of the singers was killed in battle soon after.

A new CD , Elgar's Fringes of the Fleet is now available. This is based on a new performing edition. Look who's singing - Roderick Williams, Elgar baritone par excellence, and three others, including Duncan Rock, whom I've written about at the Guildhall HERE. It's released by the small independent label Somm Recordings direct HERE and from the Elgar Foundation HERE There is a sound sample on the Somm site, it's from The Sweepers, and features Roderick Williams, the other singers in chorus. Listen for the ship's bell !

Dawn off the Foreland -- the young flood making
Jumbled and short and steep --
Black in the hollows and bright where it's breaking --
Awkward water to sweep.
"Mines reported in the fairway,
"Warn all traffic and detain.
"'Sent up Unity, Claribel, Assyrian, Stormcock, and Golden Gain."

Sometimes Elgar piano songs are a little precious, but he's in his element in rousing, energetic orchestral songs, if the Sweeper is anything to go by. The Somm CD is completely different to the one which comes free with the book, and Roderick Williams's singing alone is a recommendation - he's superb There is a story behind the CD too, for the performing editions were created painstakingly by Tom Higgins over a period of six years.

Once I owned a photo of soldiers marching off to the trenches, past a local shop. Behind the happy, smiling faces, the shop sign said "Butchers". Not the men but those who sent them out as fodder. The German Field Marshal Helmut von Moltke wrote, "No-one hates war more than a soldier". It's not soldiers who should be condemned but the politicians who use war for their own purposes - and don't give soldiers what they need to do their jobs, and don't help them when they come back wrecked.
at October 17, 2009