Paradox : The Turn of the Screw Britten ENO 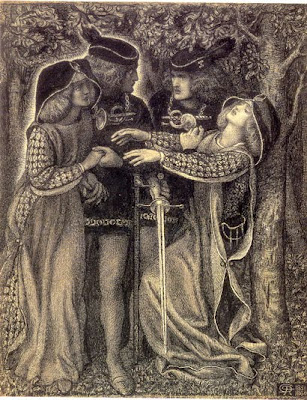 The paradox about going to opera is that you need to erase your preconception even if you know a work well, in order to take on board what someone else might think about it. Britten's Turn of the Screw is densely packed with unanswerable questions and elusive meanings. It operates on so many levels that straightforward interpretation is perhaps least satisfying.

The Turn of the Screw is about what is not visible. Are Quint and Miss Jessel ghosts? Are they projections of sexual frustration? Is it about the corruption of innocence and the nature of evil? Is Quint even the demon? Or does more evil reside in Miles than we can possibly imagine?

This is an opera about what's not "real" in a tangible sense, so it's a contradiction in terms to present as straightforward. A friend of mine said of the 2007 London premiere of this production that she was "shaken but not stirred". Everything about this opera shakes you but this production doesn't make much of the many deeper levels that make the Turn of the Screw one of the most disturbing and challenging pieces in all Britten's work.

One of the benefits of second-night performances is that singers aren't under such pressure and often sing better. Lauded as the singers may be, they aren't necessarily the best choices for an opera like this where so much rests on what a singer does beyond producing sound. I've often wondered what the Governess might be like? Clearly she's a strong personality, tougher and more proactive than Ellen Orford. She thinks that being capable brings results. Yet the opera shows that even when she seems to beat the odds, she loses what is most important. Rebecca Evans is pretty, which is no demerit, but the Governess is a driven character. Perhaps the fanaticism of a Jane Eyre might enhance the portrayal, since the opera happens in the Governess's head as much as in objective reality, but David McVicar's production doesn't stretch Evans, or the role, to full potential.

Ann Murray's Mrs Grose is a triumph, given that it's a bigger role than most realize, and she's not inthe first flush of youth. Mrs Grose isn't necessarily an older woman, but Murray brings out her maturity and common sense, if not quite the passivity in the character, whose fearfulness prevents her taking a stand. Indeed, Murray almost stole the show, so assured was her performance. Pity that the opera doesn't revolve around her. Nor does it really demand much of Miss Jessel, so Cheryl Baker doesn't need to do much.

Miles, on the other hand, is absolutely crucial. Everything pivots on who he might be and what he represents. Another paradox, for it's almost impossible to imagine a young boy with enough emotional experience to fuully create the part. Is Miles as innocent as the Governess decides from the start he "must" be because he's a child? Even away from Bly, and from the influence of Quint, Miles does bad things to other children and gets kicked out of school. Maybe he's just an abused child enacting on other children, as abused children do, but it's just as likely there's something far more sinister. I used to work with someone who sang Miles when he was young. "It does things to your head," he said.

"I am bad, aren't I," sings Charlie Manton, the Miles in this production, with a mix of boyish charm and calculated insolence. Manton looks young for his age, and his blond curls make him a picturebook image of angelic innocence. Definitely good casting. Manton sings with surprising maturity, carrying out the long and demanding part with ease. But notice what Britten writes into the music. The percussion tells us that Miles is beating the toy horse with ferocious venom, even when he's not riding it. Where does this malevolence come from?

Seeing Manton as Miles, playing the upright piano was for me quite terrifying, reminding me of those photos of Britten himself, playing an upright piano at home as a child, his feet barely able to reach the pedals. He, too, was a curiously adult child. What did Miles mean to him on a deeper psychological level? I wonder, too, how it was for David Hemmings, who sang the first Miles while he was in a kind of relationship with Britten. To the end of his life, Hemmings staunchly defended Britten, who made no indecent advances to him. But Hemmings and several of Britten's other young companions noted that Britten was in some ways even more of a boy than they were, arrested in a pre-pubescent state.

So the opera operates in deliberately ambiguity. The narrative places the blame on Quint but perhaps that's to lead you off the trail. Is Quint the demonic force that controls Miles, or it it an altogether less tangible force? It's rarely noticed why Britten has Quint played by the same singer as the narrator of the prologue. This is crucially important to meaning (particularly as both parts were written for Peter Pears). Think about it, it's scary!

Michael Colvin sang Quint extremely well, with the right sardonic quiver in his delivery, which makes Bostridge's Quint a masterpiece. It's supposed to be unsettling. Colvin, despite red wig, doesn't look like Mrs Grose's description of him, but all the more credit to him for singing the part psychologically right.

Again, McVicar's production doesn't bring out the potential in the role. If you weren't aware, you might think he was one of the various supernumeraries who flit about on stage doing busywork, pulling beds, screens, and other paraphernalia into position. Maybe that's supposed to evoke the idea of an over-stuffed Victorian house, filled with unnecessary labour-intensive clutter, but the setting isn't the story. True, it connects to Victorian ideas of sexual repression, but the menace in the Turn of the Screw is far more universal. Quint first appears in the tower (a phallic symbol), and Miles's pig Latin incantations hark back to ancient Satanic mysteries. Someone described this set as a little too "Hammer House of Horror", which is a good point, as it delimits the evil, packaging it in a pigeonhole. For Britten, I suspect the horror was far more personal than it was for Henry James. If anything, the evil in the Turn of the Screw comes out in things as modern as Omen and Rosemary's Baby. Or in real-life cases of madness and cruelty. In comparison, McVicar's Turn of the Screw is as safe as any TV drama.

Because Charles Mackerras is almost 84, and has long been a stalwart at the ENO, it is de rigueur to praise him. Nonetheless, the Turn of the Screw is fundamentally chamber music, where 14 musicians replicate the drama in the pit. Conducting this opera isn't like conducting Wagnerian forces. It's more the art of letting the individual soloists shine. In this performance, shine they did - extremely evocative, luminous playing from each person at the right time. If only such standards held in the production.

The Turn of the Screw pivots on paradox, and one of the great joys of going to the opera - any opera - is the paradox of learning how much you have yet to know, even about things you think you know extremely well. This is a wonderful opera and will always be worth hearing, but I came out of this revival wishing I hadn't known how much more it could have been.

The picture is Dante Gabriel Rossetti, "When they met themslves", a good metaphor for whatever might be going on in the Turn of the Screw.
at October 25, 2009