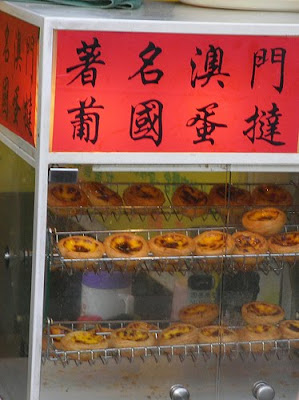 "Macau speciality: Portuguese daan tart". These are so exotic if you are used to Cantonese egg tarts, so naturally they sell like hot cakes to tourists in Macau and now are part of the city's "traditions". In fact until a few generations ago Macau-style egg tarts were different. These new-style tarts are exact copies of the kind sold in Portugal, the famous pasteis de nata from Belem in Lisbon, a version of which can be bought everywhere now, including Nandos in the UK.

These are the Cantonese version, these ones from Maxims in City Hall, Hong Kong. You can get these in any Chinese dimsum restaurant or tea house in the world. The difference is that the western one is richer, made with whole egg and extra oil and sugar. The Chinese one is lighter, less filling. Someone just told me, the Chinese ones use more water in the custard and the pastry is rice flour not wheat, which makes sense as Chinese are often lacrose intolerant.
But I suspect the Chinese one just fits better with Chinese food and taste. As for the origins? The word daan just means egg and the word tart is taken straight from the English word. But that still could mean nearly 200 years of daan tart on the China coast.

There used to be a proper Macanese version, somewhat between the two types but since there aren't any Macanese pastry cooks left, they don't get made. There used to be a Macanese pastry cook in one of the Macau hotels who did them to a secret family recipe but he got divorced and his Australian wife sold the recipe to McDonald's for a fortune. As if heritage could be sold? But whatever McD's did with the recipe the ones they sell are neither one thing nor another. Please key "daan tart" in the search box on this site - lots on Cantnese food, daan tarts and even an excellent video recipe with English translation. 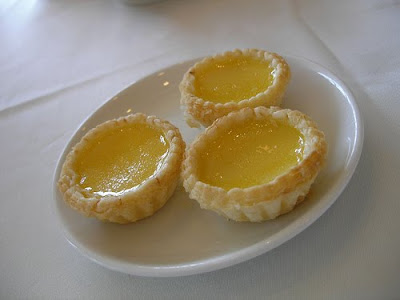