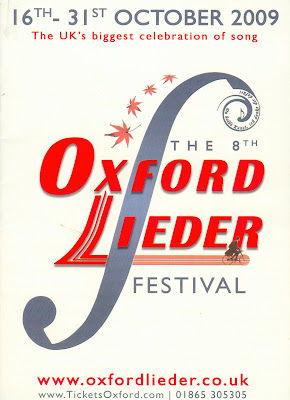 In the autumn, Oxford is especially beautiful. The ancient colleges are swathed in scarlet vines, and the mellow evening light creates great atmosphere. For those who love art song, though, the best reason for visiting Oxford at this time of year is the Oxford Lieder Festival, which starts October 16th 2009.

In only eight years, the Oxford Lieder Festival has established itself as the foremost art song festival in Britain, with an international reputation for innovation. Oxford is an ideal setting because art song works best in small, intimate settings with perfect acoustic. The Holywell Music Room, where many concerts take place, seats barely a hundred people, but the atmosphere is unique. The Holywell was the first purpose built public performance space in Europe, built around 1740. As a young boy Mozart played on this very platform: Handel and Haydn visited and may have played here too. The streets nearby are still cobbled, and the pub across the way dates from 1200. The Holywell isn't usually open to the public, so recitals at this Festival are always a special experience.

The Festival's first weekend (18th and 19th October) features the complete Britten Canticles in a special series curated by Julius Drake, The Canticles on their own are too long for a single concert, so here they are spread over two days, supplemented by other works. Hearing them together is like following Britten as he develops over the course of his life. These concerts take place at the Jacqueline du Pré Music Building, in beautiful gardens, with a view over the Oxford skyline. Refreshments will be available for a mini Glyndebourne atmosphere.

Oxford Lieder has always championed interesting repertoire. Ned Rorem's Evidence of Things Not Seen receives its European premiere on October 25th. Rorem is one of the greatest American art song composers, so it's a major event. The cycle is ambitious, written for four voices and piano, in all combinations. Some songs are humorous, others sad and some plain fun!

“It’s a huge privilege for the OLF to be hosting this performance; the first time this extraordinary piece has been heard outside of America. And we couldn’t hope for a better, more dynamic group of artists to present it tha the Prince Consort.” says Sholto Kynoch, the charismatic Artistic Director of Oxford Lieder. The Prince Consort are well regarded, and their recording of The Songs of Ned Rorem is about to be released by the audiophile label Linn Records.

The Festival also showcases unpublished, unknown songs and duets by Felix Mendelssohn, including many from Eugene Asti's new Bärenreiter Edition. Some of the manuscripts are in the Bodleian Library in Oxford, very close to where the recital will take place, preceded by a talk by Asti and Richard Stokes. "Some of these songs are wonderful" says Stokes, who is well known for his translations of French and German song.

The Festival features recitals by major European performers like Wolfgang Holzmair, Andreas Haefliger, Werner Güra, James Gilchrist, Roderick Williams, Joan Rodgers and Christopher Maltman. Nonetheless, an important part of the Oxford Lieder mission has always been to encourage all aspects of song performance. Central to the Festival is a fortnight-long residential masterclass. It's a rewarding experience as participants benefit from excellent teaching and performance opportunities and take part in all the concerts and activities the Festival has to offer. There are study days and workshops and special programmes that reach out to young singers in local schools.

I've been going to this Festival since it started and it gets better every year. It means a lot to me because it's more than "justr" a festival but part of a wider programme to enhance the performance of art song and encourage poeople to sing. Being a Friend has other advantages, too. It gets you into private dining clubs that aren't normally open to the public. Oxford restauarnts are horribly expensive and poor value, so it is important to have a place you can enjoy good food in nice, welcoming surroundings. Friends membership (£30) pays off unless you really like sitting in bars or Junior Common Rooms. Visit the Oxford Lieder site and book early as tickets sell fast.