Turn of the Screw - the movie Hickox 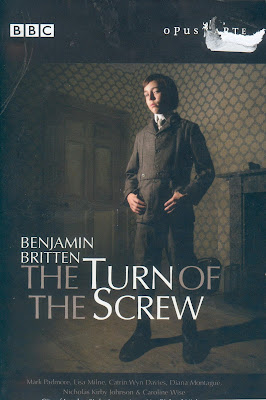 When this film of Britten 's The Turn of the Screw was screened on TV in 2004 it put a new twist on the tradition of ghost stories at Xmas. It's so atmospheric that it's not comfortable to watch, but it's full of striking insights.

The music Britten writes around the children leaps about with energy. just like Miles and Flora. Quint wants them because they're "proud, curious, agile,...like a jugglers mate". So this production makes a lot of the incessant movements - wilful, even contrary by turns, so when they have to be still it feels unnatural. They're first seen in a cemetery, solemnly carrying bouquets but first chance they get they're running over the graves, irrepressible.

Bly is a real stately home not a comic book palace. Children in Victorian times lived in sparsely furnished nurseries with natural light and little heating. The idea was that frugality instilled moral values. Scenes in this film are shot in cold, naturally lit rooms, contrasting simplicity with the decadent corruption Quint represents.

When the Governess exclaims "How beautiful it is!", she's not necessarily talking about the ballroom, but perhaps the grave classical elegance of the houses's structure. In this film, she's in the woods around the house, enjoying the beauty of nature. Indoor/outdoor contrasts reflect in Britten's music and themes in the narrative. In this film, the woods are a wonderful simile, because it's winter, with mists and fallen, decaying leaves. The trees are bare, their naked branches like sinister claws grasping at the sky. Significantly, Quint froze to death on an exposed path, and the ghosts appear first outside the building, gradually encroaching into the inner chambers. Perhaps that's why Miles sings the Malo song while fondling chestnuts and bird skulls in his schoolroom.

In the theatre, it's hard to do ghosts because they aren't solid. In this film, there are short, elusive shots - Miss Jessel lying half submerged like Ophelia, Quint face down in mud. But even more frightening are shots where they almost "don't" appear. In one of the scenes where the women and chidlren are indoors, the camera shoots through a window in the roof. The room is neat but paint is peeling off the window frame. And you see the shadow of a head.. Who would be up there on the roof looking in? Can't be human. Later when Quint and Miss Jessel come for the kids, they aren't seen directly - a hand, the hem of a skirt brushing against the floor. It's the children you see, hypnotized. When Miles sings "I am bad" in this production, perhaps he's speaking for Quint, mocking the Governess for saving the boy. In the ENO first production, Miles kissed her, which is shocking enough but completely different.

Film allows wider perspective. The scene where Miles plays the piano to distract the cooing women opens out, allowing Flora a moment to escape. She walks towards Miss Jessel in what seems at first solid ground, then revealed as the waters of the lake. Film also allows flashbacks where Miles's memories are shown. Seeing him play with his mother shows why he's so vulnerable. It also picks up on details in the text which indicate how much he does want to be saved, despite himself. Film also expands the Governess's long monologues, showing how much of the drama does exist in her mind. Telling details, such as the frame that shows her lying down, hair awry, just as Miss Jessel lay, drowned.

Lisa Milne is wonderful. As she approaches Bly her voice rasps with anxiety and fear: she doesn't lose control by any means, but adds frisson. Milne's Governess is highly strung and inexperienced. Maybe that's why the mysterious Guardian picked her? The relationship between the Governess and Guardian is yet another of the shadowings that infuse this opera and make it so powerful. Milne even manages to exude a kind of eager sensuality into the part, which works well. When she sings "In my labyrinthe" she twists and grimaces with the music. In the end, she sings the Malo song so poignantly that you realize what Miles meant by the apple tree and what it means in the Bible.

Mark Padmore's Quint is a smooth operator. He follows Britten's vocal quirks beautifully,, but he's more angel than demon. Gentlemanly elementals may exist but even plain Mrs Grose (Diana Montague) thinks Quint's a lowlife. This production, directed for TV by Katie Michell, allows Catrin Wyn Davies to develop Mis Jessel as a complete personality. Wyn Davies' rich, full voice makes you feel Miss Jessel was a nice person, truly "betrayed" rather than inherently evil. Caroline Wise makes Flora an independent-minded minx, stronger than Miles in some ways. What will become of her when she grows up, even away from Bly? Miles is Nicholas Kirby Johnson, nicely brooding and seductive.

The late Richard Hicox conducts the City of London Sinfonia. Good as the ENO orchestra was, the Sinfonia specialize in precisely defined music like this. Hickox's tempi are brisk. He captures the nervous tension in the music well, and its difficult switchback moods and colours. He's specially good where The Governess, Miles and Quint sing at cross-purposes. Watch this DVD
and see why I don't have much time for safe and bland in this opera.
at October 27, 2009