Where Handel gigged with Britton 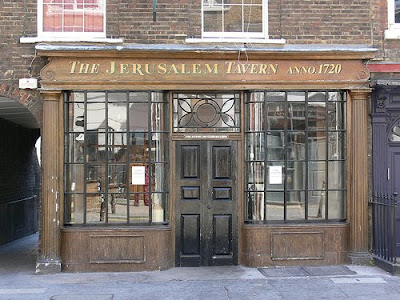 Here's the Jerusalem Tavern in London in its present building (1720), although it's been in existence since 1100. It's in Britton Street, Clerkenwell.

Thomas Britton (1644-1714) gigged with Handel and many others near here. Britton, a self-educated man of great learning, built a music room on top of his house near the site of the present tavern to create a salon – the Wigmore Hall of 1678.

In this salon, up a steep staircase, next to the charcoal store, Britton installed a harpsichord and 5-stop organ and hosted weekly subscription concerts. Handel was known to have played here when he arrived in London. Britton drew together everyone hip in musical and literary London. Besides Handel, many other musicians came to play – Britton himself sang and played the viola de gamba. Matthew Dubourg made his violin debut as a small boy at Britton's; he went on to conduct the premiere of Handel's Messiah in Dublin in 1742, with Handel on the harpischord.

Samuel Pepys considered Britton an authority on Tudor music because he also amassed a huge collection of Tudor manuscript scores, later bought by Hans Sloane, after whom Sloane Square and Hans Crescent (near Harrods) are named. Sloane's library and artifacts became the basis of the British Museum. Jonathan Swift and Thomas Hearne knew Britton well, and described him in their work.

Britton was a humble "small-coal" (charcoal) merchant and his premises were fairly basic, but even dukes and duchesses attended the "Small coal man's music club" because it provided good music and discourse. The English Civil War was still in living memory, and Victorian ideas of rigid social station hadn't solidified. Read more about the world of music clubs like Britton's, and their significance in music and social history in Arno Loeffler's excellent paper on Britton. It quotes great poems too.

There are quite a lot of places like the Jerusalem Tavern tucked about in Clerkenwell, a place redolent with history if you know where to look. The Jerusalem is still run by a small brewer, St Peter's Brewery, so visiting it is an act against multinational conglomerates.