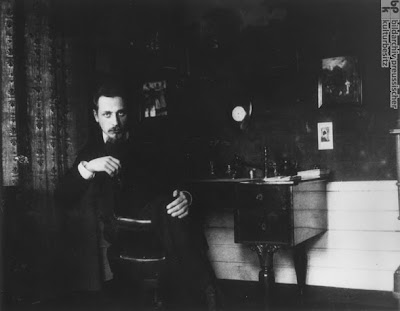 Notice how this portrait of Rainer Maria Rilke is composed. Only the poet's face and hands are clearly visible, disembodied, floating eerily in the darkness. In the room you can make out what looks like a desk, a clock, but what room is it and why is he there? Like the photo in the corner the closer you look the more the portrait opens windows. Who is this strange, forbidding man who stares glaring at the camera?

Rilke is an intriguing personality, who connects to many aspects of early 20th century thought. His poems and prose writings are dense, impenetrable, best read in small doses and ruminated upon. Setting Rilke to music isn't easy. Viktor Ullmann (of whom I've written a lot) set many of Rilke's poems. Frank Martin wrote a song cycle on Rilke's Die Weise von Liebe und Tod des Cornets Christoph Rilke and there's an opera by Siegfried Malthus. which I saw in its second production in the early 90's. Rilke's been set by composers as diverse as Alma Mahler and K H Stockhausen. In November, at the Wigmore Hall, Soile Isokoski will be singing Paul Hindemith's Das Marien-leben, to Rilke's text.

So naturally any composer fascinated by Rilke is going to interest me. Steven Ebel, one of the Jette Parker Young Artists at the Royal Opera House, is a serious Rilke fan and has written a piece based on Rilke's Diary of a Young Poet. Rilke embedded reference in his letters to many references to works the young poet he was advising needed to know about if he wanted to develop his art. So Ebel's piece, The Truth about Love works in three parts, pivoting Schumann's Frauenliebe und Liebe with Britten's Cabaret Songs and Ebel's setting of Rilke texts. The songs are intact, what's interesting is the way they flow back and forth, like the way ideas in Rilke's work move and develop. Read about Ebel's ambitious venture HERE. Young composers need support and encouragement, but especially those with courage and imagination. Ebel sings extremely well, and there aren't that many composers who really understand how to write for voice.

Rilke was an established poet when the complete stranger wrote to him, hich is why the other man asked him for advice. Far from dismissing the young unknown, Rilke treated him with respect, giving him detailed advice over a period of several years. The letters themselves are an education. Whether the young poet became a great writer or not is immaterial: his life was enhanced by what he learned about life, art and why people write. Read the letters in English translation HERE. Getting ahead doesn't mean sneering at others and squashing competition. Rilke shows that caring is important. That's why he inspires me so much.

PS Tomorrow I'll be writing about the Oxford Lieder Festival.
at October 18, 2009

The actual title of the Steven Ebel's piece is "Diary of a Young Poet" and the texts are taken from Rilke's diaries when he was 25 years of age, not from the letters he wrote later.