The trail of the missing Mendelssohn songs 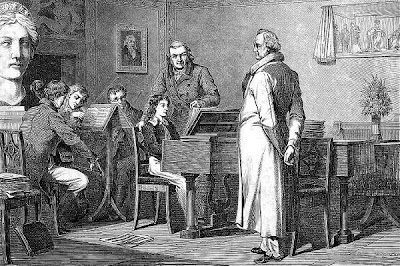 Imagine the media hysteria if some unknown work by Mozart or Schubert were found? When dodgy bits of "evidence" or composer trivia about a composer come up, the world goes agog with frenzy. But when 46 "unknown" songs by Mendelssohn are unearthed, there's hardly a ripple. Why?

The discovery of these songs is quite a story. Mendelssohn was so prolific that he simply didn't get around to cataloguing and publishing all he wrote. He was a workaholic, a genius in many fields. Apart from composing, he was a virtuoso pianist and violinist, a painter, an athlete, and a formidable organizer of orchestras and cultural events. He spent his gap year in the Scottish Highlands, in those days very remote and primitive. He died aged only 38, weakened by exhaustion.

The "unknown" songs were scattered among his manuscripts, which have since themselves been scattered around the world. There's a big cache of Mendelssohn papers in the Bodleian Library in Oxford, donated via his grandchildren, (of whom there were many), so that's where Eugene Asti went to follow the trail of the "missing" songs.

Mendelssohn's penmanship was so clear that the manuscripts were easy to transcribe, even though the composer wrote quickly, with great fluency. Tracking down the poems was in most cases straightforward - Goethe, Holty, Uhland - but others proved more elusive since some were written by the composer himself, and in Fraktur, the old-style German script that most people can't read today. Mendelssohn's letters and papers provide background into how and when the songs were written, and for whom. Intriguingly, there are references to yet more unknown songs.

What's even more remarkable is how good some of these songs are. Nachtlied, from 1847, should take its place in any anthology of Eichendorff settings. Two lovely matching strophes blossom into swelling, soaring lines as the song describes a nightingale, greeting the dawn.

Altdeutsches Frühlingslied, also from the same period towards the end of Mendelssohn's life, is another masterpiece. The piano part is brooding, melancholy, figures repeating like circles, reflecting the despair that lies under the ostensibly cheerful text (Friedrich Spee von Langenfeld 1591-1635). Spring has returned after a hard winter, "everyone is happy, wallowing almost in pleasure" (wonderful idiomatic translation by Richard Stokes). But the protagonist quietly states Nur ich allein, Ich liede Pein. In the winter just past, someone very dear him was taken away. So much nonsense is written about Mendelssohn being "happy" and mindless. This song is further evidence how silly the myth is. Mendelssohn wasn't given to unseemly display, he didn't flaff about. But his emotions ran very deep indeed. The deeply felt intensity of the final verse breaks through the polite homilies to Spring, chilling the atmosphere. Mendelssohn's beloved sister Fanny had just passed away, but feelings as passionate as these spring from veryt deep sources in the composer's personality.

Part of the reason Mendelssohn songs don't grab the average listener at first is that they don't word paint the way we're used to. Goethe is famously supposed to have rejected Schubert's settings of his poems. There's no direct evidence he even saw them, but it fits in with ideas prevalent in Goethe's circles which considered noble ideas and text more important than musical invention. Mendelssohn was very much in Goethe's orbit. the picture above shows him aged 9, playing for Goethe. Goethe adored the young Mendelssohn, introducing him to composers he knew, like Zelter. So Mendelssohn is very much a part of that neo-classical sensibility, where people didn't do unseemly self-display. Nonetheless, Mendelssohn was far too original not to connect to the early Romantic mode. He just did it in a different, more self-effacing way. Mendelssohn songs are an important thread in song development: at times you can hear where Schumann and Brahms got their ideas from.

The Goethean mindset certainly doesn't preclude passion. Die Liebende schreibt, an 1830 setting of Goethe, is surprisingly erotic. The poet's so much in love that his whole being focuses on the idea of a letter from the beloved. Yet in his quietly observant way, Mendelssohn has picked up that the beloved does not actually respond. The composer puts his emphasis on the small phrase "Gib mir ein Zeichen", (give me a sign). The word Zeichen repeats, ever louder and more passionately, as if Mendelssohn is reminding us that it's been sent out in hope, and there might, conceivably, be no answer.

Lots of other beautiful songs, too, like Seltsam, Muter, geht es mir (1830 to Johannes Ludwig Casper). The young girl's thrilled by the physical sensation of being in love, like the rising of sap in spring. Mendelsson expresses her excitement with breathless, rollicking lines: you can almost feel the girl's heart beat faster and faster. The punchline's hilarious, the girl doesn't know why her mother knows about such things. This, incidentally, is a song only discovered in 2007 when the manuscript came up for sale, having been uncatalogued and in private hands for 150 years.

Since Eugene Asti spent so many hours burrowing away in the Bodleian, it was good to hear the songs performed at the Holywell Music Room, a few hundred metres from where the papers are preserved. Asti's work is informed by his experience as a pianist, so his new edition of the "unknown" songs for Bärenreiter are specially valuable for practical performance. I had a quick look at the book. It's very detailed, lots of notes on critical decisions made and background material which will enrich interpretation. Serious Mendelssohn singers and painists need this work. HERE is a link to the edition on Bärenreiter's site.

The Oxford Lieder Festival brings treasures like this all the time, which is why it's such an important series for serious music people. Make an effort to attend as it's always interesting. This concert was almost sold out, which was good since the premiere at Kings Place in London in February happened during a blizzard and didn't get the attendance such an occasion deserved. Tonight the artists were young and relatively unknown (Aoife Miskelly, Roderick Morris, Peter Davoren, Marcus Farnsworth, Christopher Hopkins and Colin Scott) but that was no demerit: some of these songs were written for private, intimate performance, like Lied zum Geburtstage meines guten Vaters, which the 10-year-old Felix wrote for his father's birthday in 1819. His sister Fanny wrote a song too, it must have been quite some party.

Mendelssohn wrote many part songs because they suit performances where people sing and play for pleasure, not to display technique. In his understated way, Mendelssohn gets to the heart of why music is so much fun for ordinary people. The final song in this concert was Volslied, a song where the whole ensemble could join together. Written in 1839, it was performed at the composer's funeral service a few years later. Different soloists sing different lines, but they unite in the full-throated final verse, Wenn Menschen auseinander gehn, so sagen sie : Auf Wiedersehen ! The last two words repeat again and again as if the composer can't bear to let them end. Yet the same notes appear throughout the song, in different guises, so if you hear the song again, it's haunted by "Auf Wiedersehen".
at October 22, 2009