A secret kept for 50 years? 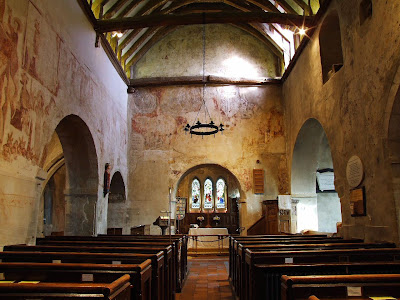 The Little Missenden Festival marks its fiftieth anniversary this year. Fifty years and still a cult secret? The Festival was co-founded by Ursula Vaughan Williams, who knew a few composers and musicians well enough to attract them to this very small village tucked away in the Chiltern Hills. Until very recently, the Chilterns were like a time warp from another age, even though they're not that far off the M25 and M40 motorways.

So Little Missenden punches way above it weight because top musicians participate because they enjoy themselves in good company. It's too small to be a commercial venture. Concerts take place in the local parish church which was built in Saxon times, and renovated when the Normans conquered Britain in the 11th century. Hence the unique acoustic: walls several feet thick cut out exterior noise, and there aren't windows to dissipate sound.

On Sunday 11th, there will be a very special concert. Rohan de Saram, the world -acclaimed cellist, and founder member of the Arditti Quartet, will be playing an afternoon recital. This means a lot as de Saram performed at the very first Festival 50 years ago, when he was a child prodigy, nurtured by Pablo Casals, Mitropoulos and Rostropovich. These days he usually plays in continental Europe so this is a good chance to hear him in England, in the church where he started his career. He'll even be playing the same piece he did then, a cello suite bt Richard Drakeford, who ran the festival for many decades.

John Tavener will feature in this concert too, for Tavener was also associated with Little Missenden. There's a film Tavener and Little Missenden by Tony Palmer who made the film about Ursula Vaughan Williams which blew the lid off the idea that RVW was stuffy and celibate.

De Saram will also be playing David Matthews's early Songs and Dances of Mourning: Matthews too is a Little Missenden regular. On Friday 16th Patricia Rozario. Tavener's muse, sings songs the composer wrote for her. Rachel Podger, Gary Cooper (fortepianist, not Hollywood gunslinger) give a candlelit recital in the tiny Church on Saturday night, and Paul Lewis, regular in all the big halls, plays Beethoven and Schubert on Thursday 15th.

Another Little Missenden exclusive on Wednesday : a concert of Hardanger Fiddle, Nyckelharpa and Hurdy-Gurdy! Not the simple hurdy-gurdy like in Winterreise but a more inventive contraption. Look at SYM trio's site for photos and sound samples.

The photo above is by Eric Hardy.Click on his name to see his photostream, excellent shots of England and medieval churches. Good closeups of the medieval wall paintings in the church and a closeup of a thousand-year-old oak beam.
at October 10, 2009