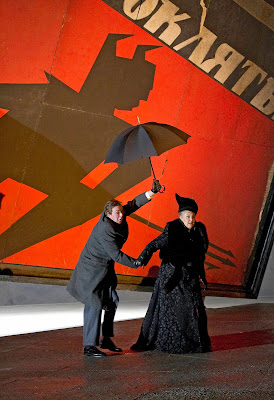 I love Janáček. I love Katya Kabanova. I love David Alden. I even love going to the Coliseum. So this completely new production of Katya at the ENO should have been a major thrill. So why did it leave me less moved than Tamerlano recently at the Royal Opera House ?

No problem with the set (Charles Edwards). The opera is about a woman trapped in sterility, so bare boards and sharply angled, oppressive backdrops are absolutely in order. This is an arena where Katya and Kabanicha struggle to the death, though the odds are mainly on one side.

Katya is trapped in this mental Siberia. That's why the walls are bare until Katya hangs an icon. Katya's an intensely passionate person, but the circumstances of her life mean that the church is her main outlet.

No special problem with the singing, either. Patricia Racette's perfectly good enough as Katya. Don't expect Söderström or Mattila, that's unfair. Racette's most convincing when she sings of Katya's youth, pretending to fly, playing in streams.
The complexity in the part, though, isn't so much in the technical aspects of voice but in characterization. Why does Katya so readily confess? Why doesn't she run off to Moscow? Why does she voluntarily throw herself in the Volga? Alden has her teetering at the edge of the stage, but it doesn't feel nearly as dangerous as it should. There is a barbarism in this opera far more demonic than the comfy 19th century setting might indicate.

Susan Bickley's a very good Kabanicha. Mother-in-law becomes woman-Hitler if you jumble the letters. Kabanicha is an emotional vampire, sucking the life out of all around her. She doesn't need to be theatrically malevolent, or she'd steal the show from Katya. Significantly, Janáček reminds us that Kabanicha and Dikoj have a past. It's unhealthy. Dikoj is a bully but gets his kicks from being dominated by this strict old dowager. Explosive stuff, with a deliberate bearing on the opera's meaning, but not emphasized in this production.

It's ironic that the stronger the subsidiary parts, the weaker the impact of the main struggle, between Katya and Kabanicha. Vavara (Anna Grevelius) is cute, but Alfie Boe as Vanja Kudriash was very good indeed. His singing was pure and animated. When he danced, he embodied the wild, free spirit Katya was when she was young. Vavara and Kudriash are what Katya and Boris might have been, but Boe's Kudriash is one of the strongest characters here - no trace of schoolmaster in him.

Clive Bayley's Dikoj is entombed in a bear costume, which is perhaps apt, and Stuart Skelton's Boris is a looming presence. Even John Graham-Hall's Tikhon looks and sounds more impressive than the role would have him. Maybe they were cast as extensions of Kabanicha, further isolating Katya? It's not necessarily in the opera, but a valid concept. Perhaps Alden might have sharpened the direction, making more of the resources to hand?

It also didn't help that it was sung in English. Of course that's what the English National Opera is about, bringing opera to the public who don't know foreign languages. And of course, the ENO is famous for bringing Janáček to the English speaking public. But Janáček's music is so closely connected to language that too much is lost in translation. Mark Wigglesworth conducts well in the genteel ENO Janáček tradition, but the crackling tension between words and music is lost when the words don't spark and bite. Katya, for example, should be Káťa - musically much more punchy.

Judging by the first night applause, Alden's Katya Kabanova will be a big success. The opera is so remarkable that it's almost impossible for it not to be good drama, even if there are many more levels in it than this production brings out. But Janáček is familiar enough these days that audiences can cope with more challenging, imaginative productions.

Please see new post on Janáček's women and what they really signify. More on interpreting Kabanicha. On Saturday I'll review The Cunning Little Vixen.
Please see my other reviews (glowing) of Alden's Lucia di Lammermoor and Peter Grimes.
at March 16, 2010

I think the problem with the production is the lack of genuine connection and eroticism in the central act. I admired Alden separating his characters, highlighting the disconnect, but the text clearly speaks of an impassioned summer night tryst in Act 2. Without that central pillar there is no sense of jeopardy. Musically, however, the evening had much to offer.

On a deeper level, eroticism for Janacek seems to be a symbol of something else. The chase for him means more than the catch. So consummation is always elusive. To some extent it reflects Kamila, who won't sleep with him because it "breaches convention", but in fact because she didn't fancy him. So he turns that refusal artisticly into a kind of justification for having heroines like Katya, Jenufa and Mila suffer for their wild instincts. He's equating sexual freedom with personal and artistic freedom. Hence From the House of the Dead where he doesn't have to disguise it in female roles. None of this either in this production, alas.

Actuaqlly readmy opther posts on Janacek,search the search box or use labels, There is lots more, also specifically on Janacek's models and what they might imply in performance practice.