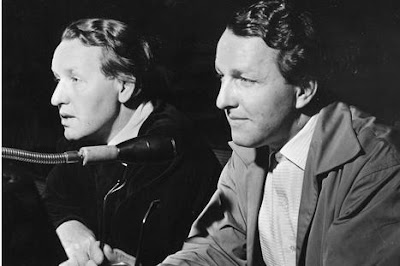 Photos of Wieland and Wolfgang Wagner and their "family friend" are well known because Family Friend used them to legitimize his own status. With the mother and grandparents they had, it's a wonder that the boys grew up relatively normal. Read HERE for my description of Jonathan Carr's book, The Wagner Clan which is a sensitive, well-balanced account.

The photo here, taken in 1955, when they were still on good terms, shows how closely Wieland and Wolfgang resembled each other. They looked like twins, and shackled in the image of RW himself. It's creepy, as if the family saga was a kind of theatre. An opera as lived in life. Also quite tragic. Wieland, the more talented visionary, dies too young, and his talented offspring are bypassed. Even Wolfgang's talented elder daughter has to share with younger daughter, as yet unproved. Wolfgang's death isn't really "news". Wait for the next installment.

Everywhere there will be the usual obituaries and no doubt explosions of venom as anything Wagner attracts hate in some quarters, rightly or wrongly from the Alberichs of this world. But here is something original, comparing Wolfgang with Lady Walton, whose passing receives less attention. Rupert Christiansen compares them as two "keepers of the flame", neither of them geniuses, but people who served genius in their own way.
at March 23, 2010

Email ThisBlogThis!Share to TwitterShare to FacebookShare to Pinterest
Labels: Wagner