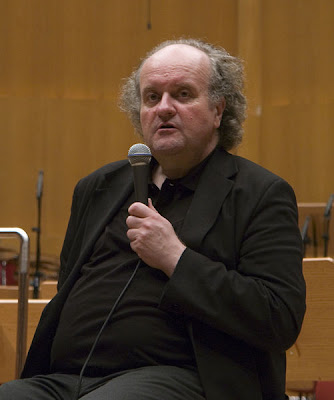 In an era when surface counts more than substance, it was refreshing to attend this BBC Wolfgang Rihm Total Immersion day at the Barbican, London. For one thing, the composer has no time for superficial clichés. "New Simplicity?" he said. "That was just a group of us friends getting together over a few beers, but someone had to go give it a title". Perhaps people need to fit things into rigid categories : it's easier than actually listening. But that's not how real composers work. "Kein Schublade", as Rihm said, "No pigeonholes".

Even as a child, he was arty, dictating stories to his mother before he learned to write. Debussy introduced him to the possibilities of music. "The process comes through the process", he said, helpfully, which means something like creativity comes from being open to things.

Rihm comes over as a fascinating person, completely without artifice and cant. All the theories in the world can't explain what makes a composer tick, and probably most of them can't explain themselves. But I hope someone at the BBC has kept a tape of Rihm's discussion with Ivan Hewett as it's a gem, better than many formal interviews.

The London Sinfonietta played the 1pm concert, conducted by Baldur Brönnimann. First, Bild (eine Chiffre) (1984), a piece so dramatic that it "is" theatre, no need for narrative. Film music this is not, even though Rihm had in mind the images of Buñuel's Un chien Andalou. Rihm's even said you could cut the music up and scramble it with the film: both are separate works of art expressing connected ideas. Conceptually this is radical because it puts the onus on the listener to make of it what he or she can. From this I got terse, skittering turbulence against moments of tense listening.

Hewett's programme notes (unusually prescient) put it much better, "this sharp little shocker.....is at once murky and sharp-edged like a knife hidden in mud...insistent hammering on metal plates provokes a furious reaction, but then things freeze into immobilty. Stammers and whispers can get no purchase on this silence.......the final outburst has the air of a suicide note".

Bear in mind the idea of music as all-inclusive theatre, for Concerto 'Séraphin' (2006-8) which evolved from ideas that have also found expression in connected chamber pieces and a piece of music-drama, as seen in the video above. The version the Sinfonietta performed is scored for fairly large orchestra. It's huge. lasting almost an hour, developing over more than 20 segments. It's not easy to take in on one listening, so listen to the BBC rebroadcast, which is on now.

Séraphin' refers to an article by Antonin Arnaud, famous for the "Theatre of Cruelty" which sounds gruesome but it's the idea that struggle is needed if the spirit is to be freed. Facing extreme challenge stretches limitations until they burst and are obliterated. That allows a new kind of consciousness to emerge, transcending all that has gone before. It's a metaphor for modern times, and hence a metaphor for modern music. You can't passively wallow, you have to engage. Brian Ferneyhough responds to Artaud, too , as have other composers. The New Simplicity meets the New Complexity! So much for silly labels. Indeed if you think about it Jesus went through much the same when he was on the cross. Rihm makes light of his compositional methods, but his music has probably gone through deep layers before it reaches the score.

Much in Concerto Séraphin is deliberately deceptive : you have to be alert. Fortunately the segmental nature of the piece allows you to concentrate on different parts, so you don't have to get it all at once. That, too, is like life, fleeting images that fly past, only to bear fruit later, when they germinate in your subconscious. The ground keeps shifting. You can fix on signposts, but as soon as you follow them, they change. The flute leads most of the early segments, high and clear, Then the flautist switches to a big, mean bass flute. What sounds at first like a bassoon or unnaturally huigh contrabassoon turns out to be contrabass clarinet. Two harps are beaten, vibrating instruments treated like percussion. Sometimes the first violin starts to lead, then goes into a strange frenzy, the others can't pursue. Snippets of almost-melody appear like Irrlicht.

Get to that rebroadcast soon! More to come on the evening Rihm concert, and if I have time, on Rihm Lieder and Killmayer
photo credit : Hans Peter Schaefer
at March 14, 2010