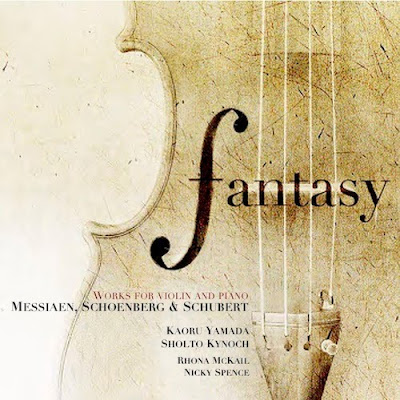 Please see this review by Fiona Maddocks of the new CD Fantasy. It "stands out for high-quality playing but also for the inclusion of three fascinating early works by Messiaen".

Combined on this disc are Schubert's Fantasie D 934 (op 159), Schoenberg's Phantasy op 47 and Messiaen's Fantaisie. This latter was only published in 2007, after it was found among Messiaen's papers. It's an important piece because it shares many ideas with Messiaen's L'Ascension, his creative breakthrough. This is the chamber version, connected to the more elaborate works for full orchestra and organ.

This is a very vivacious performance. Sholto Kynoch's playing is lively. He recognizes how the bold, emphatic chords frame the piece. and will become Messiaen trademarks. Yet he also recognizes Messiaen's fundamental clarity and warmth. It opens. as Kynoch states, " with a dramatic piano solo in quadruple octaves.....clearly demonstrating Messiaen's use of "additive rhythms whereby he slightly extends certain notes giving a unique dance feel and rhythmic drive".

Adamant as these rhythms may be, they're played with a bright, lightness of touch, so the violin part shines, too. Again, this is insight, for Fantaisie was a very personal piece. Messiaen wrote it as something he could play with his first wife, the violinst Claire Delbos. She was an established player in her own right, so this version is very much a partnership of two equals, much more so than the larger extended versions. Kynoch and Kaoru Yamada, the violinist, truly catch the affectionate, intimate spirit of the piece.

There are two other early pieces with a Messaien-Delbos connection, Thème and Variations and La Mort du Nombre. The first is interesting because it shows characteristics of the composer's later style. The second blends piano and violin with tenor and soprano, (Nicky Spence and Rhona McKail)

I've listened to Sholto Kynoch and Kaoru Yamada for many years, hearing them develop. Kynoch is an exceptionally good partner, possibly the best in his generation. It's a very rare skill, because it requires intuitive feel for text and the way it's expressed by voice as well as by piano. There are lots of good pianists, but very few with the ability to work with singers and bring out the best in partnership. For a debut recording, this is very good indeed, and a must for anyone interested in Messiaen and his music.

The disc comes from the small but enterprising independent Stone Records, and was recorded in the beautiful acoustic of the Jacqueline du Pré Music Building in Oxford in December 2009 .
at March 01, 2010