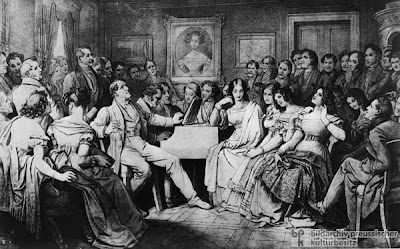 This was the first of two Schubert recitals by Matthias Goerne and Helmut Deutsch at the Wigmore Hall, London. Although the concerts don't duplicate the songs on their recent two CD set An Mein Herz on Harmonia Mundi, it's worth getting the recording as these are exceptionally fine performances.

I wish I could say the same of the start of the concert, because something seemed not right. Goerne and Deutsch both seemed distracted. Quite probably, few would have noticed the very small flaws - not mistakes, but very slight moments where the full force of what we've come to expect of Goerne didn't fully engage. In which case it probably helped not to know the CDs or how good he can usually be.

But Goerne and Deutsch are far too professional to let anything slip for long. Im Grünen, usually the forte of high sopranos, was dodgy. Since Goerne sings it flawlessly on the recording, he clearly doesn't have a problem with the tessitura. With the von Salis-Seewis settings, he settled : Ins stille Land was well shaped, legato seamless. But what makes Goerne the master he is, is his ability to inhabit a song and make it feel like real, lived experience, and this was a rare occasion when he was singing in "normal" mode. None of these songs are unfamiliar, so Goerne could sing them in his sleep, if he had to. Luckily, he's far too much of a perfectionist.

The Schulze settings, An mein Herz and Über Wildmann were more characteristically inward, Goerne warming to Schulze's frenzied idiom, which Schubert seemed to have understood only too well. Schulze's beloved existed in his fevered mind. These are not pretty, superficial songs.

After the interval, both Goerne and Deutsch were much more themselves. Deutsch's playing in An die Laute lilted insouciantly like a lute, contrasting with the hushed voice. Romantic as it is, this is a humorous song. The singer's trying not to wake the neighbours! After the excellent Schulze songs, I'd have liked more Mayrhofer but Goerne's sung them so often and so well, it would have been asking too much. He sang them last September so Augenlied and Liebesend had to suffice. Not Schubert's finest settings but thoughtfully performed.

An die Quelle is a test of a baritone's ability to sing lightly, skipping along at a brisk pace. Such crispness isn't a challenge for Goerne, whose voice is so flexible he switched easily from dark weight to sprightliness.

Perhaps I'm mistaken, but even Wigmore Hall audiences these days aren't quite what they were, so concerts have to include popular works like Du Bist der Ruh and An die Musik. Which is fair enough, they're works of genius. Once I heard Goerne sing An die Musik so perfectly that the audience was stunned numb. Tonight, Goerne was "merely" excellent, Du bist der Ruh particularly well nuanced. But even when he's not on top form, Goerne is miles ahead of anyone else's best.

Get the CD set An Mein Herz. Harmonia Mundi, Obviously, recorded and live performance are different, but until you've heard that, you won't know what Goerne can do when he's really fired up. The pic shows Schubert with his friends. A glamourous bunch - Vogl, von Schober, von Spaun, even Grillparzer. Socially, Schubert was way out of his league, dependent on his wealthy friends for patronage. Much as they liked him, he was accepted because he could play and write the kind of music they could sing. Which is why they weren't that keen on Winterreise. Quite possibly it was because he looked like a geek and was poor, they didn't find his status threatening. Had he put the make on their sisters, that would have been another story altogether. These weren't friendships on equal terms. Schubert got holidays and housing, but he had to produce what pleased his patrons. No matter how brilliant he was, basically, he was a glorified servant, not really so different from Haydn, and even Goethe before him.
at March 01, 2010