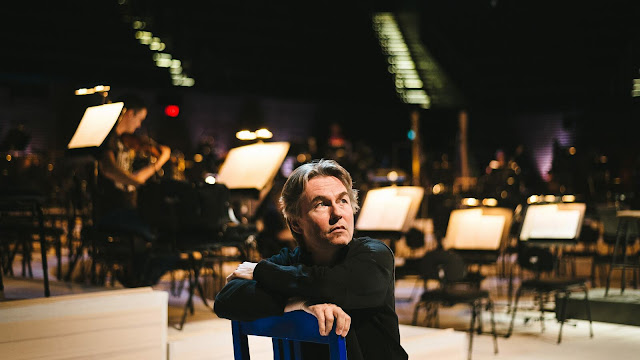 Voices of 1945 at the Royal Festival Hall, with Esa-Pekka Salonen and the Philharmonia Orchestra in Ralph Vaughan Williams Symphony no 6 (here in the 1950 revision), Richard Strauss Oboe Concerto in D and Igor Stravinsky Symphony in Three Movements. This continues Salonen's long series of programmes that make connections between composers and their responses to the changes in the world around them. This approach is especially important now that music is presented out of context on playlists and short clips.  Programmes like this creates juxtapositions that enhance depths of understanding, even of well known repertoire.  The underlying theme of this concert was war : all three composers reflecting on the impact of war, each in their own different way.

Vaughan Williams would not be drawn on what his Symphony no 6 might be "about", but that in itself intensifies what it might mean. Of his third symphony, he  explicitly stated that it was "wartime music", inspired by his experiences as a stretcher bearer in France. "It’s not really lambkins frisking at all, as most people take for granted". Thus the sixth has no cosy title to throw the unwary off track. The onus is on the listener to listen sensitively, and understand the piece from within. To hear music as no more than sound is to deny emotion and humanity. Salonen conducted the introduction so the brass seemed to scream in a communal wail of anguish. The quieter "pastoral" themes on strings, woodwinds and harps felt haunted, swept away in the tumult.  In the second movement tension built up steadily, the three note ostinato figure at first muffled, the cor anglais offering a moment of contrast before the relentless fusillade of brass and percussion. This  gives context to the saxophone solo in the scherzo, enhancing its strange, alien nature. Its jazziness is seductive, yet it suggests disorder, the breaking-up of safe structural certainties. The bass clarinet served as lament.  The final movement, with its ambiguous pianissimo, suggests not peace, but perhaps a numbness so great that even music cannot fully express. Unlike thethird symphony, there's no room even for wordless voice. Muted flutes in unison, rather than the fanfare of brass with which the symphony began.

Richard Strauss's  Oboe Concerto in D heard here in the 1945 version rather than Strauss's own revision from 1948, with soloist Tom Blomfield, Principal oboe of the Philharmonia. With his typical self-deprecating humour, Strauss dismissed it as "workshop excercises written to prevent the right wrist, freed from the drudgery of wielding the baton from going to sleep, permanently". Perhaps, but like Vaughan Williams, Strauss, who knew all too well about the destruction of German culture, (remember Metamorphosen) didn't want to be drawn into discussion, especially at a time when his homeland was under military occupation.  In any case, the solo part requires tour de force virtuosity, not only in terms of technique but in expressiveness. The first movement is exquisite, its elegance near filigree, an evocation of a more civilized, idealized past.  The timbre of the oboe matters, too : darker than a clarinet, richer yet more bittersweet.  In the final movement, D minor not major, suggests a subtle shift of mood, swiftly swept away by the blazing allegro at the conclusion.

Salonen's long series of Stravinsky concerts with the Philharmoniaa were outstanding. When Stravinsky's Symphony in Three Movements premiered in 1946 the composer wrote "Each episode is linked in my mind with a concrete impression of war.....the first movement inspired by a war film, a documentary of scorched-earth tactics in China", the second movement by the images of peasants "scratching and digging in their field" and the third "A musical reaction to newsreels I had seen of goose-stepping soldiers. The square march beat, the brass-band instrumentation, the grotesque crescendo in the tuba - all of these are related to those repellent pictures".

Even if he was later quoted (by Robert Craft) denying this, the structure of the symphony reflects turbulence and discord. The Symphony in Three Movements  operates like a kaleidoscope, of multiple aural images, fragmentizing and re-surfacing in new combinations. It's like collage, as used in the cinema where different frames are put together to create impressionistic density, images proliferating in layers and patterns. Stravinsky would have been well aware of Sergei Eisenstein. Hence the many quotes from other works, notably"primitivism" of the Rite of Spring, ritual now a force for sacrifice but not necessarily regrowth, and music planned for use in the film of Franz Werfel's novel The Song of Bernadette  whose visions give her faith, and from Beethoven's Symphony no 3, "Eroica". none of which would have been incorporated without purpose.  The inner movement is brief respite before savage, angular ostinato figues return.  One might, perhaps,  read into the piece insights into Stravinsky's predicament, looking back on his past and anxiously ahead, but the energy of this performance was such that it wholly convinced on its own terms.