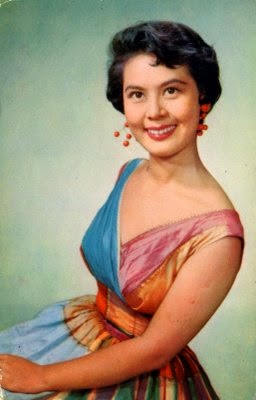 Fifty years ago today, Lin Dai 林黛 committed suicide. She was 29 years old, at the height of her career. Her death sent shock waves through Chinese communities all over the world. It's hard to overestimate the impact.  I can still recall the sense of utter disbelief when the news broke.  Lin Dai seemed to have everything going for her. Her movies were guaranteed box office hits, artistically as well as commercially top notch. She seemed to radiate happiness whatever she did. On camera, she seemed to glow. Even in private life she was vibrant and charming. Why did she want to die?  There had been a trivial family misunderstanding but nothing to suggest suicide. She was given a proper Catholic funeral, since the bishop ruled that her death wasn't intentional. To this day, fans flock to give their respects at her pink marble tombstone. After  her death, her husband kept their room exactly as she had left it, with her hair in her hairbrush and her lipsticks on the dressing table. When he died a few years ago, the room was preserved intact in a museum. 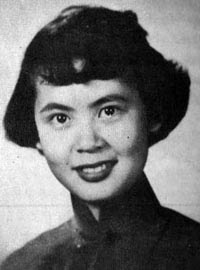 Lin Dai was loved because she was much more than an actress. She was a symbol of the hopes of her era. When she died, it was as though those dreams were shattered. Lin Dai's father was a powerful politician in Guangxi, a province with a tradition of fiercely independent reformist leaders, among them  General Bai Chongxi (白崇禧) hero of the anti-Japanese resistance. The Japanese invasion created one of the biggest population upheavals in modern history. Millions of Chinese moved as refugees to the distant  western provinces of Guangxi, Sichaun and Yunnan. Later, the demographic upheaval reversed, and millions fled the Communists. In many ways, Lin Dai represented Brave New China.  She was making a fresh start in a new region and in an industry which played an important role in the modernization of China. In her first movie, 翠翠 Singing under the Moon (1953) she plays a country orphan, devoted to her grandfather. People could identify with her fresh, youthful optimism.

In 1957, Lin Dai was signed by Shaw Brothers Studios, bigger and more ambitious than any other Chinese (and many western) film studios. Shaw Brothers put Lin Dai in high-budget historical extravaganzas. far more sophisticated than anything she'd done until that time. In Diau Charn (貂蟬) her big breakthrough, she played a heroine who united warring kingdoms.  The Kingdom and the Beauty (江山美人) beat all box office records. Lin Dai plays the peasant girl who steals the heart of an Emperor in disguise. It's one of the best Shaw Brothers movies of all time. It's a shame that the company that bought the rights to Shaw's catalogue hasn't done much to make them better known. The Kingdom and the Beauty is so good that it could easily find a p;lace in international cinema. Lin Dai also starred in Beyond the Great Wall and The Last Woman of Shang, both released after her death. In Beyond the Great Wall, she plays a heroine who goes into exile to save her lover the Emperor and her country. These movies aren't ponderous, stultified costume dramas because Lin Dai plays her roles as convincing human beings. The shot above shows her famous pout, followed by a slow sideways glance that often bursts into a smile. 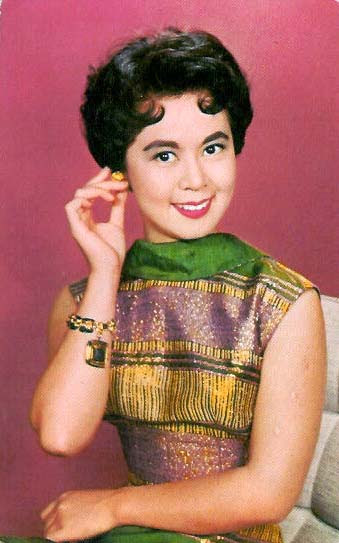 Lin Dai also made an opera-based movie, Madam White Snake (1962), but her singing voice was untrained, better suited to more light-hearted musicals,  and cheerful comedies like Les Belles, Bachelors Beware and Cinderella and her little angels and Love Parade, with an unusual story line based on fashion shows, for which she designed the costumes.  She was a "modern girl". Lin Dai's vivacious charm makes these films sparkle, but they're much better than similar films from Hollywood.  She was also a serous dramatic actress. In The Blue and the Black Parts 1 and 2, released after her death, she plays a brave woman whose life is damaged by war.

But the movie that makes Lin Dai immortal has to be Love Without End (不了情, 1961). This is a version of La Traviata. The heroine even retreats to a remote island in her last illness, where she's tended by a Catholic priest. Lin Dai plays a virtuous nightclub singer whose beloved faces financial ruin. To save him, she agrees to go abroad with a rich man, but gives her virginity to the boyfriend first. He doesn't understand, and walks out on her in an extremely moving scene where he skulks along a back alley while she watches from above. Eventually, he finds out that she sacrificed herself for his sake, but when he tracks her down, it's too late. Like Violetta Valéry, she dies. If only this film were readily available outside Region 3. It's one of the most iconic movies of Hong Kong in  that period, describing the values of its time. The title song is so famous that it's seared forever in the memories of those who were there.  It's not actually her singing voice,  but it breaks the heart.