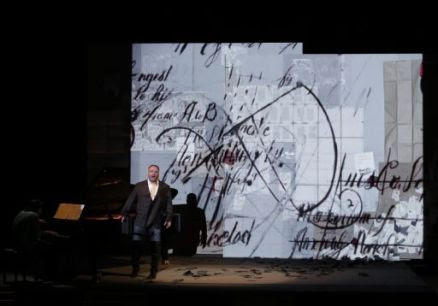 Schubert Winterreise with a difference! Matthias Goerne sang Schubert Winterreise with pianist Markus Hinterhäuser at the Aix en Provence Festival with a background of projected images designed by Sabine Theunissen, directed by William Kentridge. Not that there's much to direct. Goerne sings as he would normally, only occasionally turning to gaze at the scenery behind him. A perfectly valid approach, since the protagonist is acutely aware of his surroundings, even if he interprets them subjectively. Perhaps what happens is all in the protagonist's mind, but the richness of the imagery in the music and in the text suggests a typically Romantic interaction between Nature and inward emotion. A well-known baritone once told an audience to think of the "pictures" as Wegweiser, each song marking a distinctive, almost physical stage in the journey.

Staged Winterreises are nothing new. There have been many, even danced versions  but this new staging, premiered in Vienna in June, is one of the best because it makes us consider whats happening in our own minds when we listen.  There's nothing wrong in principle with staging Winterreise. It's so powerful that it demands emotional engagement. There's no such thing as clinically sterile listening. We all respond, each in our own ways, some more expressively than others, but respond we must.

Theunissen's images follow a stream of consiousness that flows alongside the music in a kind of counterpoint. Sometimes we see obvious figures like Der Lindenbaum, and Die Krahe, but then they morph into something more personal and esoteric. It doesn't matter what the images mean in a literal way. The images are predominantly archaic, referencing early 19th century manuscripts and lithos of trees and Germanic architecture. We see figures of men and women glimpsed briefly, as if someone is remembering snatches of a past. These figures don't need to be from the protagonist's memory. The act of listening is in itelf creative. All of us have buried memories.  If we're thinking about the protagonist's feelings of lost love, why shouldn't fragments of our own pasts pop up in our imaginations? Everyone of us will make different connections, but Theunissen shows us the way sentient people process their feelings and use the submerged data in their psyches.

Stream-of-consciousness images can operate on many parallel levels. Theunissen incorporates images of war and desolation, also perfectly valid for a listener living in modern times.  Indeed, the darkness in Winterreise almost predicates on images of death.  The scent of the Linden Tree reputedly has narcotic powers.  "Komm her zu mir, Geselle, Hier find'st du deine Ruh'!"  The protagonist can't rest under the tree. In any case, in winter, he'd freeze.  We see Der Lindenbaum morph into the horrifying The Hanging by Jacques Caillot, made during the Thirty Years War. In 2014, we cannot forget the start of the Thirty Years War of the 20th century, which  ran on with pauses until 1945.  Despite the horrors, somehow the world survived, if only to descend into further conflicts outside Europe.

Deciduous trees in winter are bare, but they carry in themselves the promise of rejuvenation.  Thus the protagonist forces himself even further into the wilderness, following the tracks of animals until he at last connects with another wanderer.  Theunissen's trees thus add to the interpretation of Winterreise. Does the protagonist go mad, or die or hallucinate the Leiermann?  Or does he find some form of painful wisdom? Winterreise is powerful because it's open to many different interpretations, as is all good art.

Every time we hear a performance, or even think about it, we're developing and refining the way we understand the piece.You don't have to understand every single frame in this Winterreise, but  its worth respect. When we're listening, we're doing something persobnal. No-one will ever have exactly the same take on anything. Even when we listento recordings, we hearb things differently because we ourselves are not the same as we were last time round.  After 45 years and hundreds of different Winterreisen, I'm still learning from different perspectives and interpretations. Some Winterreise stagings are so,literal as to be hardly worth the effort . This one, however, enhances the work because it deals with the very nature of creativity that inspired Wilhelm Müller and Schubert, and hundreds of thousands of performers and audiences since their time.  Arte and Medici TV will soon be showing the Aix performance online. The live show, which has also been heard in Amsterdam and in Germany, will also be done at the Lincoln Center in the fall.
at July 22, 2014