Rossini Le turc en Italie, Il Turco in Italia at the Aix-en-Provence Festival. a delicious approach to an opera that predicates on mistaken identities, fancy dress and good humour. The opera may have been written 200 years ago but its charm shines ever brighter in this lively staging directed  by Christopher Alden. Rossini's Prologue is very long but illustrates the themes to come: lively, upbeat frolics give way to a horn solo, at turns sensual and melancholy, interrupted by staccato outbursts from the rest of the opera. Rarely is abstract music translated so perceptively into visuals. The joyous, extravagant tutti in the orchestra suggests exuberance: we see a stage covered in minute abstract patterns, bathed in ever changing colours. But, like the horn, the central character is alone. 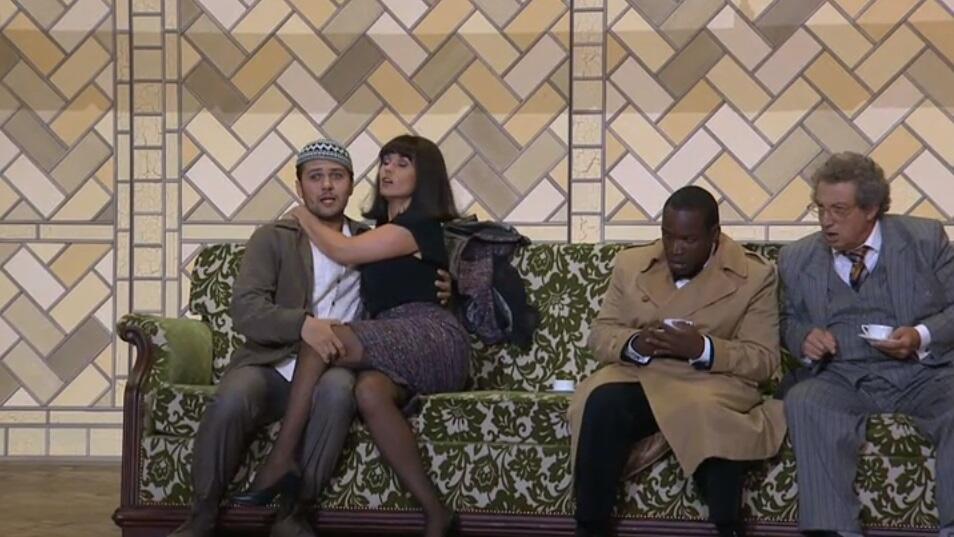 Prosdocimo (Pietro Spagnoli) is so fixated on writing something that  he doesn't notice the glories around him. His friend Don Geronio (Alessandro Corbelli) is frustrated too, by affairs of the heart. Luckily the gypsies arrive. Gypsies are outsiders.  They don't have to be garbed like escapees from a bad staging of Carmen. They represent people who don't conform to the rigidities of convention. So Zaida (Cecelia Hall) says she's an escapee from a Turkish harem. Selim the Turk (Adrian Sâmpetrean) turns up, but he's attracted to Geronio's glamorous wife Fiorilla (Olga Peretyatko) who fancies him, ignoring her husband nearby. As for Narciso (Lawrence Brownlee) he's living in dreams. So much for literalism. Il turco in Italie is art, not history. Prosdocimo is a poet, not a bean counter. The characters flirt: the art of illusion. Prosdicimo can magic up chairs.  Alden's lighting (Adam Silverman) magics up colours. Rossini's music magics up a wonderfully vivid storm. Conductor Marc Minkowski whips up the tempi, and the singers and chorus sing heady, windswept staccato. 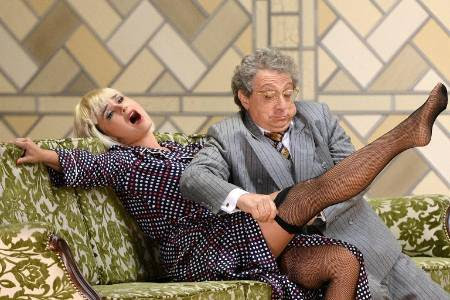 Wonderfully punchy performance, electrified by sprightly, punching rhythms, lucidly enunciated. In the inn scne, Corbelli and  Sâmpetrean joust with rapier-swift passage work. The strings add exclamation points. Lovely detail: the inn is as colourful and kitschy as a pseudo-Turkish tea room, complete with plastic-coated tablecloths, which serve a purpose. As Selim and Geronio scrap, they push bottles back and forth, the bottles sliding in time with the music. Everything predicates on confusion. Stunning dialogue between Sâmpetrean and Peretyatko. Until now, Rossini doesnt give Narciso all that much to sing, but when Brownlee  explodes into Tu seconda il mio disegno, he reveals the intensity Narciso has kept hidden for so long. Earth shattering high C's.  Corbelli 's Geronio is a tour de force, sparkling with fire and agility. At last, even Albazar (Juan Sancho) gets to sing his heart out.

Magical  ensemble in the Masquerade scene, when the ship's mast is lit with golden lights, and Corbelli ascents its dizzy heights, expressing Geronio's pent-up rage.  This scene is crucial. When Fiorilla realizes what divorce might mean, Peretyatko's singing becomes impassioned, for she knows what Geronio is made of. If there had been good singing before, Peretyatko now brought down the house. Superb. And so the Poet Prosdocimo gets his inspiration. Poetry, and opera, is about human emotion.