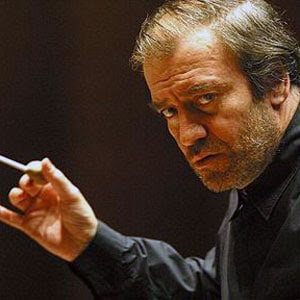 In the aftermath of  MH 17, it's hard to think of any ally of Vladimir Putin as an ambassador for world peace.  On the other hand, because I genuinely believe in freedom of speech, I can't condemn him for having opinions on subjects he's bound to know more about than I do. Plus, the Gergiev/Putin connection means support for the arts in Russia.

In any case, the grandiose title "World Orchestra for Peace" wasn't Gergiev's idea.  The orchestra was created by Georg Solti. The concept was idealistic and attracted much celebrity support. Musically, however, the orchestra has performed only some 20 times since 1995, four of which were at the BBC Proms.  It's good that musicians can get together from all parts of the world but that doesn't mean musical consistency,especially with players from 75 different ensembles whose styles don't necessarily mesh.  The Lucerne Festival Orchetsra (founded 2003)  is a summertime special too, but altogether in a different league in musical terms because all the players are on the same level of expertise, and work together regularly. The West-Eastern Divan Orchestra (founded 1999) probably does more for world peace than any other orchestra because it focuses on a specific conflict zone, and gives young musicians opportunities they would never otrherwise encounter.

Gergiev can be maddening as a conductor but he's almost never boring.  When he conducts repertoire that resonates with his soul, he can reach heights of brilliance. When he's forced to conduct material he doesn't like so much, he can be infuriating. His Mahler, in particular, is notorious for being Gergiev, not Mahler. So when he conducted Mahler Symphony no 6 at Prom 4, he achieved the feat of making the piece lifeless. It wasn't nearly as dull as his 2010 Prom with this same orchestra (also Mahler) but the sense of dutiful earnestness hung heavy. How I yearned for Gergiev when he's inspired, even when he's demonic, with an orchestra prepared to take risks and let rip.

Earnestness and duty hung heavily on Roxanna Panufnik's Three Paths to Peace. The short work (12 minutes) attempts to plait together the sounds of Islam, Christianity and Judaism;  the result was worthy, but vague. How does peace come about? When people's hearts and minds are focussed on pragmatic ways of ending specific problems. Think about what's happening in Gaza. Pretty music isn''t going to make a shred of difference. I quite liked Gergiev's way with Strauss's Symphonic Fantasia on Die Frau ohne Schatten , but like so much else on this evening, it wasn't quite the real thing.
at July 21, 2014