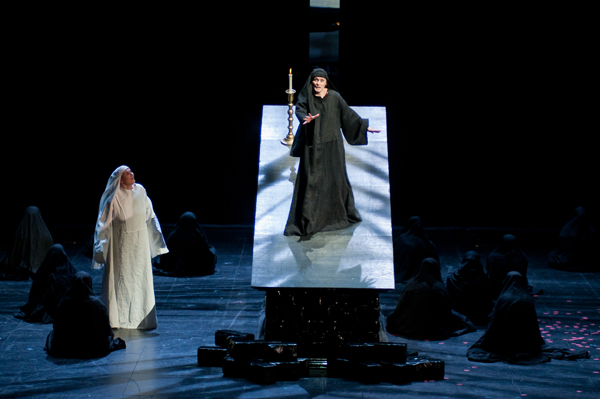 Paul Hindemith's opera Sancta Susanna still has the power to scandalize. Nearly 100 years after it was written, (January/February 1921) it's still a shocker in many ways. It's a psycho-drama, where the emotions of the protagonists are thrown into extreme focus, the music emphasizing psychic trauma.  Sancta Susanna bends musical form, pushing the borders of tonality, just as the narrative pushes the boundaries of convention. Sister Susanna is praying in a convent chapel, as nuns are supposed to do. But it's May, it's warm, and the open windows let in the perfume of lilac blossom.  Then, strange other sounds. "It's the organ" says Sister Klementia, and we do hear an organ  exhaling. But why is an organ being played at midnight ?

Hindemith's music is ambiguous. Though tonal, it's fundamentally untamed, like the breathing of a wild animal  that might turn savage if roused.  Which is very much what the opera is dealing with : the explosion of sub-conscious instinct in circumstances of repressive order. The Zeitgeist of the early 20th century, to which early psychology gave vocabulary, but which has, of course, existed since the beginning of mankind.  And thus we hear a melody on solo flute, as lovely and as lyrical as something the Greeks would have played in a mythical Arcadia.  Is it the voice of the Nightingale, another age-old symbol ?  Against this loveliness, angular blocks of sound and increasing dissonance.   John Fulljames's production, with designs by Johan Engels,  lets the music speak. The stage is dark - as in a chapel at midnight - crucial details spotlighted as if by moonlight. We see the crucifix towering above, shining white, as if it were porcelain, hard and impermeable, yet easily broken.  Below, the altar, a simple grey plinth that could be a tombstone as much as a table for offerings.  Or a bed.

For the sounds Susanna hears come from a young couple copulating outside a window.  Fulljames depicts this by using acrobats who hang, suspended from the ceiling, their bodies naked, yet held in by black straps.  Not bondage gear, but a reminder that society holds sexuality in check  through moral bonds and ropes. The acrobats move like dancers, writhing in frenzy.  I thought about Renaissance sculpture, where voluptuous bodies contort, yet are held frozen in stone.  Like statues of Jesus, whose agonies are not sexual, but stylized in art.  And nuns, who contemplate religious intensity but are restrained by vows of chastity. Sister  Susanna doesn't know what sex is, but she knows it has an effect on her.  What happens when a nun's love turns to physical lust ?  Naked bodies, blood and upturned eyes, the sensuality of flowers and incense, the singing of angels real or unreal : It's hardly surprising that some can get carried away. Sister Beate was entombed for her sin. That doesn't stop Sister Susana , who rips off her white garment, revealing a body built for the enjoyment of pleasure. She's covered in arcane writings and drawings, as if some ancient curse was embedded onto her skin.  Other nuns appear, in black shrouds like niqab.  they hold their hands up in horror, like denizens of a Greek tragedy. But they, too, have arcane inscriptions on their hands and faces.  Sister Susanna mounts the altar. She doesn't rip the loincloth off the image of Jesus, as the original stage instructions suggested.  Nor do we need to see a spider crawling over her - the ensemble of nuns move like a monstrous spider. It's enough that she lies with he legs apart as the statue on the crucifix miraculously, blasphemously, moves down towards her.

Bernhard Kontarsky conducted the Orchestra de l'Opéra de Lyon. The soloists were Agnes Selma Weiland - Susanna,  and Magdalena Anna Hofmann - Klementia.  Hindemith's vocal lines are impressionistic, phrases cut off hardly completed, ominous rumbles and flights up the register which  are nothing now but were something in 1921/2.   Superlatively detailed acting helps a lot. Fulljames inspires the singers so their body language expresses what their words can barely articulate. Wonderful close ups, tiny gestures, for this is very much "inner drama".

Sancta Susanna  was one of a triptych of operas Hindemith write based on the plays of August Stamm (1878-1915)  the other two being Mörder, Hoffnung der Frauen op. 12 (1921), and Das Nusch-Nuschi op. 20 (1921) . The common thread: a fascination with morbid psychopathology, ofetn with exotic, erotic connotations. Absolutely the Spirit of the Age,  manifesting in the paintings of the Munich Secession, in literature, film and music. Santa Susanna's cousins are Salome, Elektra, Ewartung, the operas of Franz Schreker and Rudi Stephan's bizarre Die ersten Menchen, which like Sancta Susanna premiered in Frankfort, but a year earlier.  Cinema can depict things that can't be done on stage. Thus the masterpiece movies of the early 1920's like The Cabinet of Dr Caligari,   Der Vampyr and a host of other films some of which I've written about here (see the labels Weimar and movies silent)
at October 11, 2016