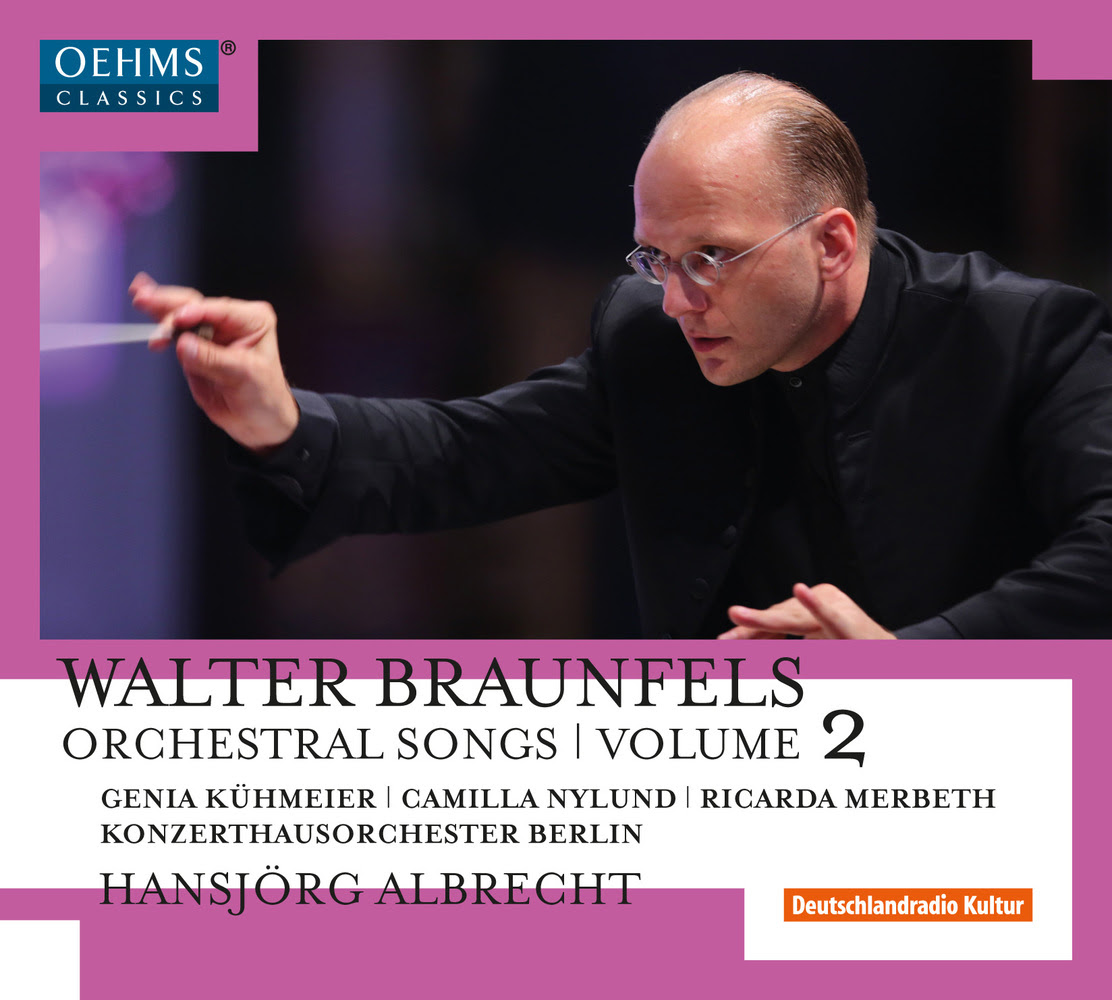 Walter Braunfels Orchestral Songs, Vol. 2, with Hansjörg Albrecht, this time conducting the Konzerthausorchester  Berlin, with soloists Camilla Nylund, Genia Kühmeier and Ricarda Merbeth, an excellent companion to the outstanding Braunfels Orchestral Songs vol 1  (reviewed here). Honours yet again to Oehms Classics who understand the importance of excellence. A composer as good, and as individual, as Walter Braunfels deserves nothing less.

Braunfels' Drei chinesiche Gesänge op 19 (1914) sets texts by Hans Bethge whose loose translations of Chinese poetry, Die chinesische Flöte (1907) had a huge influence, building on the mid-European fascination with the East, which dates back at least to Goethe.  The East represented an alien aesthetic, something possibly purer and more mysterious. Hence the appeal to Jugendstil tastes and the new century's quest for new ideas and forms of expression.  Braunfels's  songs are not specifically"oriental", but evoke an attractive ambiguity, as if the forms of 19th century tonality were being gradually evoked from within. Ein Jungling denkt an die Geliebte, in particular, seems to float in timeless space, evoking the moonlit night beside a pool where "ein feiner Windhauch küsst den blanken Speigel des Teiches" : a mood which Braunfels captures with great poise. The image will be familiar to anyone who knows Mahler's Das Lied von der Erde - the last line even refers to "der dunkeln Erde" - but Braunfels's treatment is very individual.  The high tessitura of Camilla Nylund's voice complements the long, searching lines for the strings. Extremely refined.  In Die Geliebte des Kreigers, dying diminuendos suggest the despair of the maiden as she thinks of her soldier, far away. The horns evoke the sound of a (European) battle and the rhythms the sound of galloping horses.  Somewhat reminiscent of Mahler, though the rest of the song is more turbulent, culminating in several climaxes, the final "dem mein Herz gehört!" a shout of anguish.

Braunfels' Romantisches Gesänge op 58 were completed by 1942, but some date back to 1918.  The first, Abendständchen, to a text by Clemens Brentano bears resemblance to the Bethge songs, but Der Kranke, to a text by Joseph Freiherr von Eichendorff, is altogether more individual.  In Ist der lebens Band mit scherz gelöset (Brentano) the searching woodwinds and sliding vocal ellipses are echt Braunfels.  Der Pilot (Eichendorff), with its rousing trumpet calls and choppy rhythms, is heroic, the second strophe swelling magnificently. "Liebe schwellet sanft die Segel" - the wind in the sails, propelling the boat forward.  Nylund emphasizes the word "Morgen!", which Braunfels marks with a short pause. 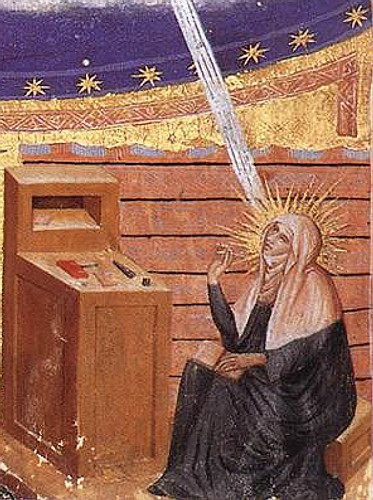 With Die Gott minnende Seele op 53 (1935-6), we are firmly in Braunfels's characteristic territory, medievalism employed as disguise for dangerous modern thoughts, beating the Nazis at their own game. The poems are by Mechthilde von Magdeburg, a 13th century mystic. As so often in Braunfels, background matters.  Mechthilde's writings, collected together as Das fließende Licht der Gottheit, were controversial because she criticized the Church hierarchy practices that didn't tally with the purity of faith.  Had she lived 300 years later, she might have been a protestant, in every sense of the word.  For  Braunfels, living under the Third Reich, Mechthilde would have had more than mystical appeal.  She could have been a prototype for Jeanne d’Arc – Szenen aus dem Leben der Heiligen Johanna op. 57. Please read my piece on Braunfels Jeanne d' Arc HERE

The magnificent introduction to Die Gott minnende Seele, with its haunting horn melody, prepares us for the dark richness of the vocal line to come. It feels like slipping through a time tunnel, for the text isn't poetry so much as prayer.  In the first song, the same phrase repeats with pointed variation "O du giessender Gott in deiner Gabe, O du fliessendern Gott in deiner Minne!", the pattern recreated in the orchestration.  Utter simplicity, yet great depth and sincerity.  Gradually the pace quickens: sudden flashes in strings suggesting rapture, then a quiet humble ending "ohne dich mag ich nicht sein".  An even lovelier melody sets the tone for the second song, where Genia Kühmeier sings the sprightly lines so they suggest excited palpitation.  The song ends with the melody, this time on low winds and brass.  There's something vernal and innocent in the "medievalism" in this cycle, where voice and orchestra interact, as if Mechthilde is singing to invisible voices: not a bad thing in a hostile world, and very Joan of Arc. When  Kühmeier sings "Herre, Herre, wo soll ich hinlegen?" her voice flutters and the flute answers. A duet between birds, another Braunfels signature.  This delicate fluttering is even more prominent in the last song Eia, fröliche Anshauung which begins with quasi-medieval pipes and develops into a merry dance. Mecthilde may be isolated, but she's happy.  This wonderful, tightly constructed song cycle is a miniature masterpiece.

From a nun to an Egyptian queen: Braunfels's Der Tod der Kleopatra op 59 (1944).  The harp suggests a lyre, and there are suggestions of bells but Braunfels know what's more important to Cleopatra: the man without whom she'd rather be dead. Braunfels marks this moment with an orchestral interlude, suggesting that Kleopatra is thinking about what really matters in life, not the trappings of wealth.  This song runs nearly 10 minutes but proceeds in carefully marked stages, the point at which Kleopatra takes hold of the snake also highlighted by the orchestra.
Back to Bethge with Braunfels' Vier Japanische Gesänge op. 62 (1944–45) based on Bethge's Von der Liebe süß’ und bittrer Frucht  In these songs, Braunfels doesn't even bother with fake japonisme, but treats each song on its own merits. Whatever the culture, human emotions remain the same.  All four songs are dramatic art pieces, the third, Trennung und Klage, particularly interesting, with the lovely dialogue between instruments in the orchestra, the strings suggesting night breezes "the Dämmerung den Mond". The singer here is Ricarda Merbeth.  It's worth noting that Bethge, despite his interest in exotic cultures died only in 1946 and was a contemporary of Braunfels.

On this second recording of Braunfels's Orchestral Songs, Hansjörg Albrecht conducts the Konzerthausorchester Berlin, which doesn't have an ancient pedigree like the Staatskappelle Weimar on the first recording, but does have Braunfels connections. The orchestra, set up by the DDR to counterbalance the Berliner Philharmoniker, was conducted for many years by Kurt Sanderling, like Braunfels no friend of the Nazis, and by Lothar Zagrosek whose recording of Braunfels Die Vögel is outstanding. Quite frankly, unless you know Zagrosek you don't know Braunfels.  DDR musical traditions weren't as dominated by commercial pressure as in the west,  so they represent much deeper traditions.

In recent years there seems to have been an attempt to pigeonhole Braunfels as a "romantic" . When  his Berlioz Variations were done at the Proms. the most interesting variations were cut so the piece came over like Hollywood pap. That might please some audiences but it's unfaithful to what Braunfels really stands for.  In any case what passes for"romantic" bears no resemblance to Romanticism as the cultural revolution which reshaped European history and aesthetics.  Although Sensucht was a typical Romantic meme, Romanticism as a movement was progressive, radical and very political. Although the notes for this recording are more focused than in the previous volume, they are too concerned with fitting Braunfels into a category, which is not the author's fault since she clearly knows Braunfels and his music, but may be marketing imperative.  But what is so wrong with evaluating a composer on his own grounds, without having to force him into the straitjacket of categories? Why not listen to his music, as music, without preconditions?  Braunfels is a good composer because he was himself, whatever the Reich around him might have wanted.  The Nazis liked "romantic", backward-looking music, so re-branding Braunfels would be ironic. All the more we can thank Oehms Classics and Hansjörg Albrecht for bringing us Braunfels as Braunfels, revealing his true originality.

Please also see my other pieces on Braunfels and on music and culture of this period.