Franz Schreker Die Gezeichneten from the Opéra de Lyon last year, now on arte.tv and Opera Platform.  For my review of the superlative Bayerische Staatsoper production, conducted by Ingo Metzmacher please see HERE.  The translation, "The stigmatized", doesn't convey the impact of  the original title, which is closer to"The Cursed", suggesting violent exclusion from society.  This production gets close to the full horror of the drama, so it's uncomfortable listening.  In 1911, when the opera was written, and in April 1918 when it premiered in the last months of the First World War and impending collapse of the German and Austrian empires, it must have been more harrowing than we can imagine today. It's not opera which has changed, but the expectations of modern audiences who'd prefer Watch With Mother to art.

The Vorspeil opens on long shots of the sea, a surging, inconstant surface, an image that highlights the music itself, and the hidden depths in the drama.  Over these waters, young women of Genoa were transported, kidnapped from their homes, to an island not far from the city but cut off from the world around it.  In classical mythology "Elysium" refers to a perfect paradise.  In Die Gezeichneten it's a playground for the Id where moral values do not apply. On Elysium, the rich corrupt and destroy. The image of the sea gives way to images of young girls, ravaged and brutalized, imprisoned  in Elysium's dungeons. These look like clips from snuff porn, though there's no actual nudity. We're supposed to feel traumatized, for these girls are being degraded for entertainment. We see posters of the missing, so many innocent faces, torn from their homes to suffer and die, so many that you wonder why no-one seems to question the power of the corrupt. Since these girls are daughters of aristocratic families, that raises questions of complicity. How culpable is Alviano Salvago? He's a hunchbacked dwarf, apparently so repulsive that even the most degraded prostitutes won't have him.  So why did he build Elysium and let it be a sanctuary for abuse  He's an aristocrat himself, so what is his real relationship with Count Vitelozzo Tamare (Simon Neal) and the others who use and abuse Salvago's hospitality?

The opera itself offers no answers, but the production evokes Salvago's inner desolation. The noblemen are macho, dressed in black leather, Salvago in white, against a backdrop that suggests hardness and desolation.  Charles Workman is a tall, surprisingly elegant Salvago, his only deformity a red birth mark on his face, not nearly enough to make him as repellent as he assumes he is: perhaps Salvago's self-hate stems from much deeper psychic wounds.  Perhaps it's not PC to show a dwarf as a dwarf but that says more about society's refusal to accept difference than about disfigurement itself, which is not a crime. Does Salvago's distress lie in his culpability?  We don't know, but we do know that he's trying to sell Elysium and shut down the depravity it shelters.  Gradually, the black, white and grey of the set warms with shades of burgundy: the colour of wine, blood and Salvago's birth mark.

Carlotta appears, in fetching burgundy leathers.  Like Workman,  Magdalena Anna Hofmann is tall, a veritable Diana among a troop of  moral trolls. She's an artist, and artists can see beyond surface appearances.  She sees the beauty in Salvago's  soul and wants to paint his portrait. Salvago created Elysium as a temple of beauty, but let it become polluted. Although he wants, now, to gift it to the city of Genoa, he can't erase what it became.  Duke Adorno blocks the gift for what its secrets might reveal should they come out.  Markus Marquardt's  Adorno is shown as a grubby bureaucrat: the kind of nonentity that lets abusers go unpunished, all over the world. Tamare describes the wonders of Elysium, its blue lights, hypnotic perfumes and music.  The orchestra plays the lovely interlude, illustrated by projections of delicate flowers, blowing gently, but ghost-like, evoking the young women whose lives were sacrificed in the falsehood of Elysium's beauty.  In the frenzy of orgy, the lines between beauty and ugliness blur. When Carlotta declares her love for Salvago, his bitterness poisons him. He makes her feel bad, like a witch.  In this production Carlotta is clearly portrayed as a working artist, pushing Salvago to reveal his innermost self in the name of art.  She wears a paint-splattered coat:  not a passive love interest but the pivot on which the whole drama turns.  Off comes Salvago's jacket, off comes Carlotta's coat, and lights shine in the studio. The painting is finished, Salvago's soul captured.

In the introduction to the last Act, the music is illustrated by magical lights against darkness. Salvago is dancing, as happy as a child. But low woodwinds and distant, offstage vocalise remind us that this idyll is haunted. In the scene between Carlotta and Duke Adorno, director David Bösch minimizes background action, focusing instead on the singing and on fine details in the acting. This is critically important, since it is here that Carlotta tries to explain herself. The audience should pay attention. A woman hides her allure in modesty, yet reveals herself naked: complex, contradictory feelings, good intentions and primal urges.  On "this burning summer night", she wants to lie with "the goblins in the bushes". The connection between summer nights and devilry will be pretty clear to those who know the mythology behind Johannesnacht, but Bösch wisely avoids emphasizing that more clearly than is in the score.  Instead, the focus is on enchantment: magical, twinkling lights, illusion, not all that different from the delusion that Elysium stands for. Thus Salvago sings of Carlotta disappearing like a will o' the wisp. The wedding party cheer him, but he knows he has lost Carlotta even before he knows where she has gone. At last he confronts the cruelty of his situation "Ich bin kein König, bin ich ein Narr!". The crowd keep cheering : they don't care about his suffering as long as they 're having a party. 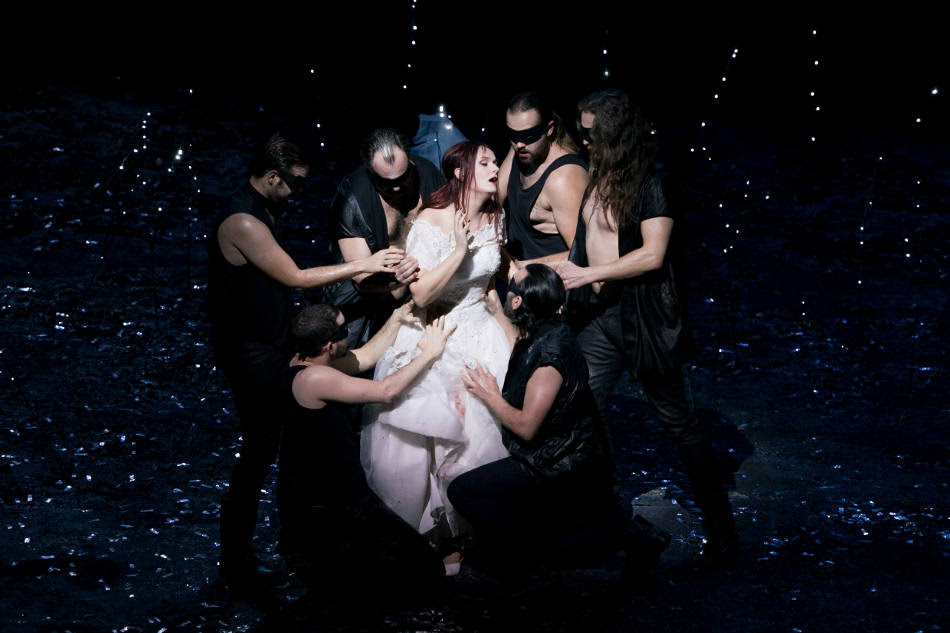 Thundering chords. Duke Adorno reappears, now in stately black, accusing Salvago. The witness is a young girl kidnapped and raped while celebrations were going on. She's so young, she's clutching a doll.  Although it wasn't Salvago who attacked her, it happened in his house.  He's culpable.  Yet again, the music expresses things the libretto cannot explain.  Salvago hears distant music, harps, flutes, cymbals and singing voices. Echoes of Der ferne Klang and the magic music of the underground cave.  We see the image of the sea, again, this time tinged with burgundy, reminding us of the many young women whose lives were destroyed. Suddenly, we're back in the dead zone,   where young girls' bodies lie broken. Tamare mocks Salvago, who retorts that he's seen depths Tamare can't even imagine. Being an artist means being able to see what philistines like Tamare cannot comprehend.  This perhaps explains why the young women are all daughters of wealthy noblemen.  Salvago tried to create beauty. Tamare and his friends are incapable of understanding the concept of art, and are compelled to destroy anything purer, better and more elevated than themselves.  It's not lust that drive them so much as hate, the negation of creativity and art.

The young girls rise as if from the dead, clawing Tamare, as if dragging him to hell, but not before he has a vision. He's seen the hate in Salvago's eyes before. Once, at another wedding, Tamare had killed a fiddle-player, driven mad with grief.  Schreker's referring to the ancient meme of Der Speilemann. The fiddle player pops up again and again in Lieder and Romantic mythology, often as someone who loses a woman he loves though she chooses a man who can give her what he can't.  Fiddlers are also the Devil agents of mindless destructiveness.  Carlotta comes to life but cannot hear Salvago call.  The sparkles we see on the ground look now like shards of glass, yet she crawls over them to reach Tamare, who reaches out to her as he dies.   Throughout this staging, Bösch  picks up on ostensibly small details in the score and libretto, like the little red light,  which Salvago stares at. Whatever it means, it disappears abruptly. Perhaps the light has gone out for Salvago. "Bring me my fiddle, my cloak with silver bells", he cries. Alviano Salvago, the nobleman of Genoa, who aspired to build Elysium now the village fiddler gone mad because his art has failed.

Although dark, this production represents Schreker's Die Gezeichneten more faithfully than the Nicolas Lehnhoff production for Salzburg, conducted by Kent Nagano, though the performances then were stronger, though the Lyons cast aren't at all bad. You'll need them both.  The subject matter is dark, and needs to be treated seriously. Grown-up audiences ought to cope, unless they, like the nobles of Genoa, are complicit in covering up crimes which are all too present in our own time.  In contrast, Bösch's Mozart The Marriage of Figaro, which is also available on Opera Platform, captures the elegant brightness of that opera, and the element of social satire, with airy pastel tones and warm-hearted humour.   Schreker's Die Gezeichneten will be done in July 2017 at the Bayerisches Staatsoper, with Ingo Metzmacher conducting - ideal ! - with John Daszak, Catherine Naglestad and Christopher Maltman.  The director will be Krzysztof Warlikowski.  I can hardly wait !
at October 31, 2016