Jiří Bělohlávek conducted the Czech Philharmonic Orchestra at the Rudolfinium, Prague, last week, in Tchaikovsky and Mahler, with soloists Joshua Bell, Bernarda Fink and Pavel Cernoch. The Rudolfinium is a shrine to the blossoming of Czech music and national spirit. A statue of Antonin Dvořák proudly faces the building. The interior is beautifully unrestored, the ambience enhanced, gracefully, by the fading patina of the gold painted columns and the mellow glow of antique wood panelling. Yet the orchestra members wore flowers, symbolizing Spring, for the concert marked the start of a new season. Renewal amid the autumnal weather outside, and the vintage atmosphere inside the hall.  Utterly appropriate for a performance of Mahler's Das Lied von der Erde.

Bělohlávek has conducted the Czech Philharmonic Orchestra and National Theatre for years, and has brought authentic, idiomatic Czech music to the world. Once he cut a striking figure with his bouffant hair and sturdy body language. Now he's frail, thin and bald, but if anything, that's added to the impact of his performances.  As Abbado showed in Lucerne, tough challenges can inspire. Bělohlávek may not have been a particularly Mahler-oriented conductor, but so what? He understands the  fundamental emotional depth of Das Lied von der Erde and that counts for a lot. This was an elegaic performance, not rushed, not somnolent,  but dignified. The composure of those who are truly strong from within themselves.

The trumpets attacked, with truculent fervour. Das Trinklied is no "drinking song". Dunkel ist das Leben, ist der Tod. The protagonist isn't giving up without a fight.  Life is short but what lies ahead but an ape, grinning in the moonlight?  For me, Trinklieds need a sense of feisty defiance. Golden goblets mean nothing when wine runs out.  Pavel Cernoch, a regular at the Czech National Theatre, doesn't have honeyed tones, but gets the right sense of anguish. 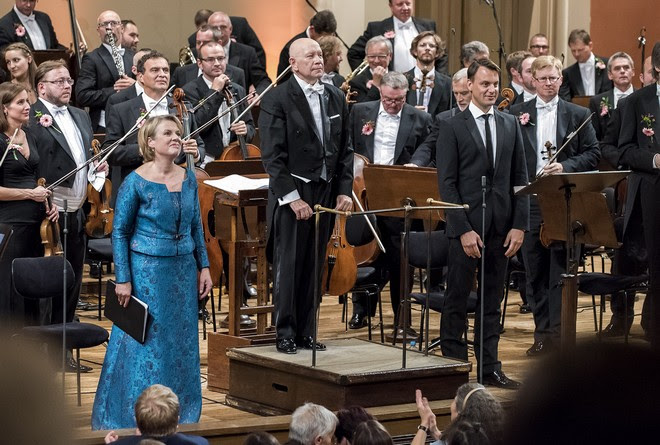 This framed the characteristic warmth of Bernarda Fink's voice, making one appreciate what she's singing about, and why.  She's not in the first bloom of youth, but that would be inappropriate. Instead, Fink sings with the poise of maturity. The "gold" in Das Lied von der Erde lies in the timbre, and in delivery informed by life experience.  Although her roots are Slovenian, Fink grew up in South America, and came to Prague when she was a Junge Mädchen.  Perhaps this had a bearing on her performance, which was magisterial yet sensitive : characteristic Bernarda Fink, but this time with extra, personal expressiveness.

The glow in Fink's singing was amplified by the orchestra, whose highly individual sound, honed on the feistiness of Czech repertoire,  balanced warmth with pungent spirit, again, utterly appropriate to Das Lied von der Erde. Nostalgia, yet not sentimentality, a sense of loss, yet not of meek submission.  Von der Jugend kicked off with energy  : already we can hear the images of movement to come in Von der Schönheit. where the orchestra played with sprightly vigour : the image of young men on prancing horses. The last, quiet moments cast a chill, as they should, a detail which is often overlooked.

Der Abschied began gently, suggesting the gathering of clouds: autumnal mists filled not with mellow fruitfulness, but something altogether more mysterious. Clarinets, bassoons, horns and harp : something cosmic is happening . The flute swoops in graceful ellipse : moving us on. Der Abschied moves in a series of stages, a miniature "procession" as Mahler's transitions so often resemble.  Bělohlávek observed the long central interlude carefully, for it is during this section that the transformation, whatever it may be, germinates.  When the vocal line returns, we've entered a new scenario. "Er stieg vom Pferd": the moment of departure. Fink's singing became even more gracious. The winds sprang up, almost literally, leading to another transit. "Ich wandle nach der Heimat".  Then the celeste, truly "celestial",  and we're on another plane of existence, where the earth becomes green again, and blossoms bloom "Ewig.....ewig".

Joshua Bell, Bělohlávek and the Czech Philharmonic began this concert with Tchaikovsky beautifully played, but for me, this Das Lied von der Erde was one to remember.
at October 03, 2016