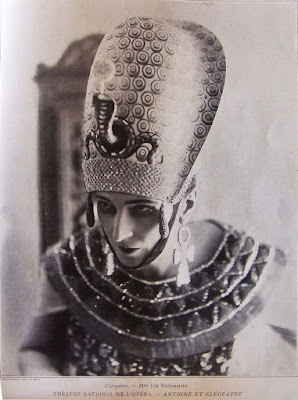 Florent Schmitt's Antony and Cleopatra (Suites no 1 and 2, Op 69, 1920)  with Sakari Oramo conducting the BBC Symphony Orchestra, with movements re-ordered and interspersed with excerpts from Shakespeare, adapted by Bill Barclay of Shakespeare's Globe Theatre, at the Barbican Hall, London.

Lurid colours lit the stage, saturated washes of red and gold. Aquamarine lights shone on the platform floor, spotlights glowed on the sheets the musicians were playing from. The music was equally lurid, beginning with a wildly exuberant fanfare  Not a military display so much as statecraft as theatre. Perhaps Cleopatra, like many rulers since, knew you can dazzle others even if you don't have much in the way of firepower.  So spoke Enobarbus, describing Cleopatra to his fellow Romans :

"The barge she sat in, like a burnish’d throne,
Burned on the water: the poop was beaten gold "

No wonder Ida Rubinstein - another  extravagant diva - wanted to portray her and asked André Gide to create a spectacular showcase. Stravinsky was asked to provide the incidental music since he, Diaghilev and Rubinstein had worked together since the early days of the Ballets Russe, For various reasons he demurred.  Florent Schmitt's Antony and Cleopatra quotes so explicitly from The Rite of Spring that one wonders what Stravinsky might have thought, particularly as the angular "primitivism" of the Rite is overlaid with elaborate decorative ornamentation.  Barely seven years before, the Rite of Spring had scandalized Paris, causing a near riot. In Schmitt's Antony and Cleopatra, the fierce chords depict the Battle of Actium so graphically that you can almost visualize ships battling on the open ocean.  Swashbuckling stuff!  Consider Erich Korngold's infinitely more original Die  tote Stadt which also premiered in 1920, with great success, pretty much inventing a new musical genre.   In the 1920's movies were silent, but spectacular. Consider Jacques Feyder's L'Atlantide (1921) where the Queen of Atlantis lives in North Africa. But what we now call film music had its roots in popular music for the stage. Exoticism is a theme that has such deep roots in the French aesthetic that its influences are felt far beyond specifically exotic subjects.
Japonisme shaped Debussy : Africa shaped Picasso.

Orientalism in France has a long pedigree, dating back to Napoleon's campaigns in Egypt , bearing fruit in an enduring fascination with different exotic locales, which manifested itself in painting, literature and music.  Berlioz La mort de Cléopatre, and Les Troyens, Bizet's The Pearl Fishers, Délibes Lakmé. Massenet Le roi de Lahore, and the songs of Maurce Delage and Jaubert.  Ida Rubinstein's Cleopatra was part of a huge surge of public interest in things Egyptian which influenced fashion, decorative arts and popular culture, which still prevails today. The French Shakespeare tradition goes back to Charles Kemble, and carried no cultural baggage. Berlioz's Roméo et Juliette, for example, is very much an original work, not a setting of the play Thus Rubinstein's Cleopatra, via Gide, is part of a much wider cultural theme.


This Antony and Cleopatra was part of a year-long celebration of Shakespeare all over Britain. Hence the high-profile production, with the BBC SO, the flagship of the BBC stable of orchestras.  Schmitt probably doesn't get luxury performances like this too often. Sakari Oramo conducted with panache, he and his orchestra clearly enjoying the big brass effects and theatricality. At one point, the actors "spoke" to Oramo, who is noted for his good-natured geniality. He beamed and acknowledged them without missing a beat.

"Purple the sails, and so perfumèd that The winds were lovesick with them. The oars were silver, Which to the tune of flutes kept stroke, and made The water which they beat to follow faster, As amorous of their strokes"

The actors were Janie Dee (Cleopatra), Simon Paisley Day (Antony), Brendan O'Hea , Cassie Layton and Tom Kanji. The Director was Iqbal Khan.  Shakepeare's Globe isn't Stratford but earthier.  there's not much you can do about staging at the Barbican,  but then Shakespeare's own productions seem to have been closer to Greek ideas than to Hollywood.  The concert was recorded for broadcast at a later date, but I'm glad I saw it live.
at October 05, 2016