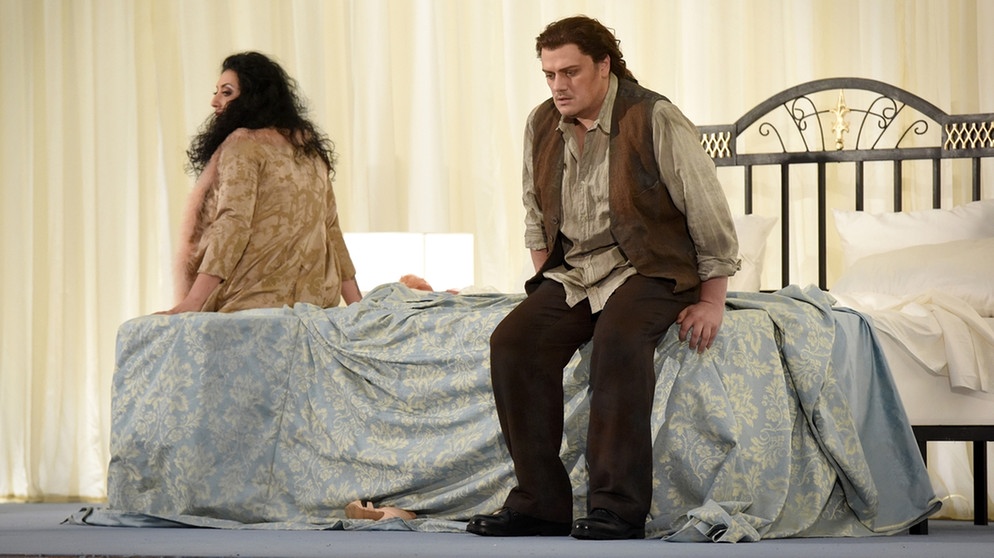 Charles-Camille Saint-Saëns Samson et Dalila op 47 (1877) with Anita Rachvelishvili and  Aleksandrs Antonenko,conducted by Philippe Jordan at the Opéra Nationale de Paris, in a new production by Damiano Michieletto: beautiful and very moving, but best of all, doing justice to the score by enriching the personalities of Samson and Delilah themselves. Saint-Saëns pared down the narrative,  safe in the knowledge that, since audiences would be sufficiently familiar with the biblical original, he could concentrate on the innate emotional drama within. Yes, there are exotic touches, like the pseudo-Levantine tambourine dance, but even that is a clue, since Dalila's performing for show. Her true feelings are hidden.  Instead,  Saint-Saëns wrote music which was in many ways ahead of his era, to the extent that Parisian audiences couldn't really appreciate its merits at first.  Although orientalism had been a part of the French aesthetic since Napoleon, the opera wasn't an immediate hit.  Despite his disavowal of Wagner, Saint-Saëns could hardly escape some influence.  In Samson et Dalila, we can detect Tristan und Isolde in the surging heroic motifs and grand doomed passions  The choruses are particularly rousing.

The Overture begins with a faint suggestion of Hebrew horns, but soon  expands into more abstract sonorities, contrasted with an elusive high string melody. Samson (Aleksandrs Antonenko) sits alone. The chorus, still hidden, intone an ancient chant. On Samson hangs the survival of his nation: he's strong, but is he strong enough? As he looks at his hands, the grille behind him lifts and we see the Hebrews, calling for help.  "Arretez, O mes freres!" Antonenko sings forcefully, but he knows that salvation comes from God not man. The Governor of the Philistines, Abimélech (Nicolas Testé) declares the superiority of his own god. Samson strikes him dead and the High Priest (Egils Silins) orders a massacre. Bodies lie crumpled on the ground, yet the chorus continues singing solemn prayers. Samson, for all his strength, is gentle. With simple white linen, he covers the faces of the dying to protect their modesty and dignity.

Meanwhile, Dalila (Anita Rachvelishvili) watches, unobserved from inside the Temple. This isn't in the stage directions, but is utterly true to the portayal of her character. She's moved by Samson's kindness.  Rachvelishvili sings lusciously, because it's her job to seduce. Nothing personal.  Even in the palace, surrounded by her handmaidens, she's an object to be pawed and fawned on, guarded by armed men, but  necessarily loved. She's a prisoner of her own situation, which is perhaps why she's touched by Samson's kindness to the dead.  An extremely sympathetic, finely nuanced characterization, for the music suggests  that she's a very complex personality.  Of course she's dangerous, as the Old Hebrew (Nicolas Cavillier) warns.  But she's no automaton. The richness in  Rachvelishvili's singing suggests opulence, yet tinged with half hidden sadness.  Magnificent leaps up the scale to demonstrate power, but  the voice resonates profoundly at the lowest point of her register, Dalila sings of Spring, but the orchestra reminds us of the fundamental chill around her.  In her retreat, Sorek, Dalila is surrounded with luxury, but the High Priest is clearly boss. Silin's body language suggests he's a manipulative abuser rather than a holy man. He paws her, too. Rachvelishvili sings along, but again the tense flurries in the orchestra suggest fear, the tightly controlled vibrato in her voice implying suppressed fear.  Whirring, menacing diminuendos in the orchestra evoke her mental state as she awaits her mission.

Blue shadows cover the golden hues in the bedroom : the "colours" of the Hebrew Chorus invading the Philistine sanctuary, as Samson enters.  There is a frisson, not only in the orchestra but in the way Antonenko and Rachvelishvili interact with each other.  Exceptionally detailed acting is important, because it amplifies meaning, and enhances what is being sung.  Good acting isn't exaggerated semaphore. One of the great benefits of modern opera staging and film is the way singers can extend the impact of their singing through fine detail. Tiny movements in the face and hands flow naturally from the emotion put into singing, placing much less pressure on singers than crude park and bark. In the love scene - for that is what it is - between Samson and Dalila, the music swoons tenderly, the diminuendos now evoke the fluttering of heartbeats. Intimacy not display. Nonetheless, Dalila has to do her duty. As the timpani crash, we hear the "cut" coming. When Rachvelishvili sings that last "Adieu" it's a scream of pain, not triumph. 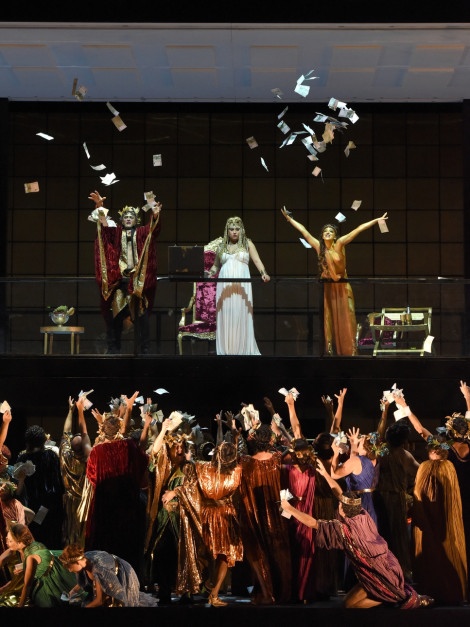 In prison, Antonenko sings Samson's agony, his guilt increased by the sounds of the Hebrew chorus.  Dalila materializes, as if in a dream.  Bachvelishvili doesn't sing, but she moves to the swirling figures in the music, clearly as tortured with guilt as Samson is: a  daring touch on the part of director Michieletto, but extremely perceptive because it shines light on Dalila's personality, and colours the Bacchanale to follow. Now, the Philistines are celebrating; the orchestra breaks into heady rhythms. There are exotic "arabic" flavours but the palette here is much more sophisticated.  Langorous lines suggest drunken dancing - the lines suggest langorous, drunken waltz, cut by violent energetic angles. Plenty of colour, especially gold.  The High Priest throws money to the cheering crowd.  Bachvelishvili wears the golden wig the High Priest gives her, but stands aside, her face acting out what Dalila might be thinking: not pride but disgust.  Samson is beaten up by the mob.  The music gets wilder, then, in a flash, Rachvelishvili pushes through the mob to Antonenko, her face livid. The music changes, the beating stops.   Bachvelishvili dances but her body language suggests that her heart's not in it. Although there's a lot of wine being poured about, at the end  ravaged and guilt ridden, Rachvelishvili pours another fluid: petroleum.  Antonenko calls for God, and Pow! the stage goes up in flames, or rather lurid, sulphuric, blinding light.  A dazzling stroke of theatre!  No need to see columns crashing down.  The invisible God of the Hebrews has spoken.  In any case the music concludes so fiercely that there wouldn't be time.  Brilliant stagecraft from Michieletto, absolutely true to the spirit of  the music and to the meaning of the opera.