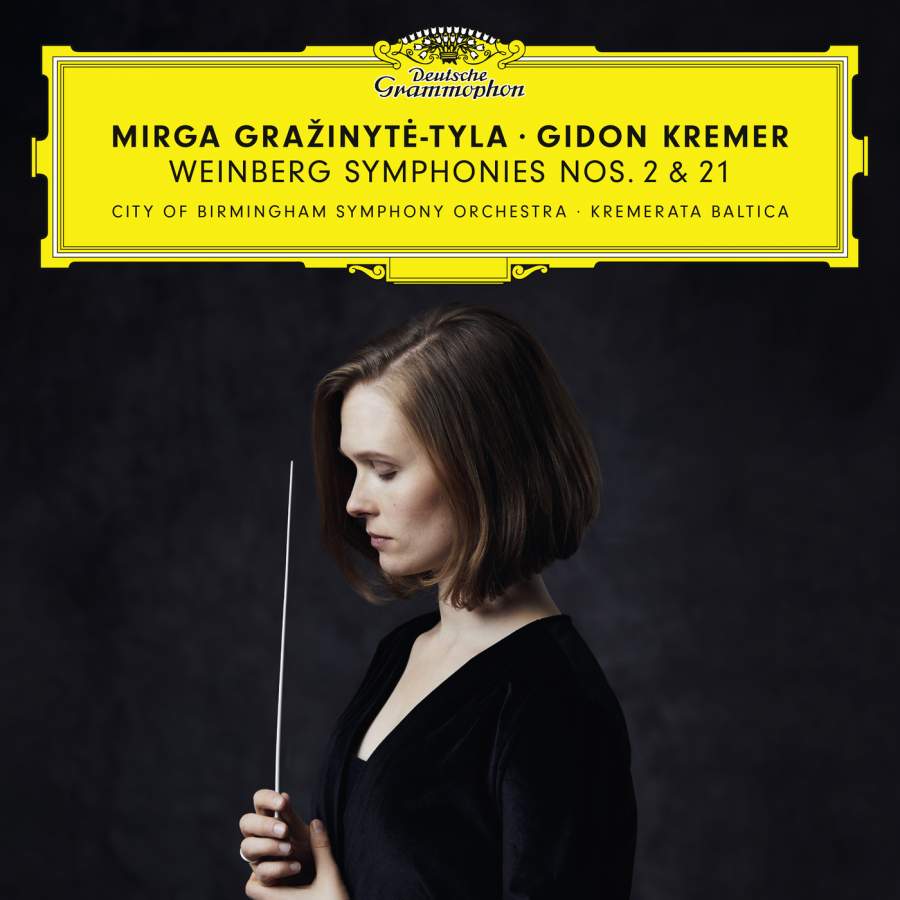 At last on CD, Mieczysław Weinberg's Symphony no 21 "Kaddish"  (op 152, 1991) with Mirga Gražinytė-Tyla conducting the City of Birmingham Symphony Orchestra, and Gidon Kremer and the Kremerata Baltica,  from the acclaimed live performance, part of the in-depth CBSO Weinberg series in November 2018. The symphony is a deeply personal statement. Weinberg witnessed the Holocaust first hand. He survived, though millions didn't, including his family.  Yet its musical qualities are such that they make it a milestone in modern repertoire.   Though the symphony does get performed and has been recorded once before, this performance is exceptionally idiomatic as it is made by the finest specialists in the field, Gidon Kremer and Kremerata Baltica, supported by Gražinytė-Tyla and the City of Birmingham Symphony Orchestra, in top form.  With these impeccable forces, it is unlikely that this performance will be surpasssed for some time. This belongs in every collection, Weinberg-focused or not.

The combination of chamber orchestra, soloists and large orchestra is fundamental to structure and meaning. Embedding the ensemble and soloists within the orchestra shapes highlights individual voices against a wider background. In the apocalyptic tumult of the Holocaust, personal utterances must not be overlooked. This also extends  the forces Weinberg can bring to bear in this panoramic landscape. "It is hard to string this bow", said Gražinytė-Tyla of the interaction between ensemble and orchestra. "The reason is that long passages are dominated entirely by a solo voice and various chamber ensembles while the gigantic orchestral apparatus of almost 100 musicians sits on the stage" resurfacing at different points.

The Largo opens with  the plaintive sound of Kremer's violin, singing, poignantly, alone. Weinberg could be referencing many sources - the role of violinists in Eastern European culture, community fiddlers as well as trained virtuosi.  On an autograph manuscript, Weinberg quoted the title of Mahler's song Das irdische leben where a child cries out for bread, but is ignored, and dies. There are also quotes from Chopin's Ballade no 1 in G minor, op 23, further anchoring the Polish context in which Weinberg grew up. With muffled timpani, darker forces enter. There are moments when Kremer deliberately hardens the tone. But the violin soars upward, supported by the strings in the orchestra, before being silenced by a single, harsh drumstroke. The violin resumes reaching a very high tessitura above the steady pulse in the orchestra, before quietly subsiding as the orchestra shapes tranparent, ethereal textures. The Allegro molto shatters any illusion of peace. This is graphic music. Ferocious chords and turbulent cross-currents, interrupted by "gunfire" (percussion) and sudden, sharp outbursts of violence. The Largo is built around a chorale-like anthem.  Tense, quiet passages alternate with more expansive motifs.  Kremer's violin re-emerges, bold, klezmer-like figures taunting strident, low-voiced brass.  The Presto is manic, screaming alarums and  madcap grotesquerie. Yet Kremer's violin will not be stilled, its melody restrained but uncowed. As it fades, the Andantino rises, single notes plucked on violin, answered by the orchestra.  This section is exquisite, executed with great poise, a reminder of  civilized values.

In the Lento, the panoramic landscape of the Largo is redrawn. The violin is plucked, quietly, against a wash of high-pitched  winds - winds suggesting movement and change - bells ringing against ostinato discord, and a soprano voice is heard, singing a wordless plaint. The soprano is Gražinytė-Tyla herself, who trained as a singer and came from a music background.  She knows how to carry a line, and the purity of her tone fits perfectly with what the voice might signify.  The part is substantial and quotes passages that Kremer and the other soloists had played before.  At moments her voice deepens richly before soaring upwards before the piano (Georgijs Osokins), clarinet (Oliver Janes), violin (Kremer) and double bass (Iurii Gavryliuk) return, the ensemble raised from the dead, so to speak, reunited with Gražinytė-Tyla's song, growing with even greater affirmation than before. The symphony ends with a mysterious  glow in this extraordinarily sensitive performance.  This is a symphony of such multi-layered depth and subtlety that it rewards attentive listening.

Weinberg's Symphony no 2 op 30 (1946)  may have been written closer to the time the events described in Symphony no 21, but traumas like that need time to process. In any case, Weinberg had to contend with Stalin and the Soviet authorities. Written for string orchestra, the textures are lighter, Gražinytė-Tyla conducting the Kremerata Baltica so the lines flow gracefully. The part for solo violin dominates, leading the ensemble forth.  In the Adagio the violin takes flight. The higher strings follow but are met by a hushed section for lower strings. The Allegretto is lively : brightly poised and nicely defined.
at June 16, 2019