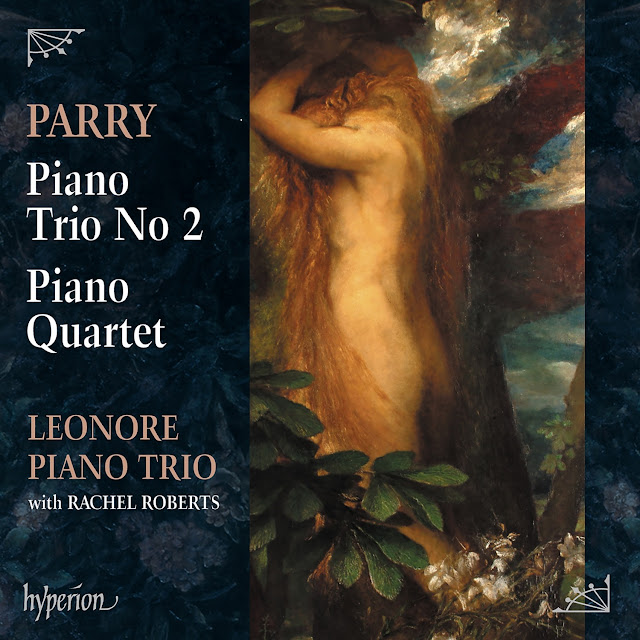 The Leonore Piano Trio continue their traverse through the piano works of Sir Charles Hubert Parry for Hyperion Records with  Parry's Piano Trio no 2 and the Piano Quartet in A flat minor.  This disc complemeents their first recording, with Parry's Piano Trios nos.1 and 3 and the Partita for piano and violin . (please read more here).  The Piano Quartet was completed in January 1879 and premiered soon after at the home of Parry's friend and mentor, Edward Dannreuter. Despite its complexities, it received many performances in the years therafter.. A critic of the time wrote that "It is something to have an English musician who is not afraid to obey the dictates of his inner conciousness, notwithstanding that by doing so he is sacrificing immediate popularity and critical approval".  In The Times, Parry's originality drew praise. "Of what special school Parry is a steadfast disciple needs not to be told.  He is no timid believer, but a proselyte through intimate persuasion".

Parry's Piano Quartet in which the Leonore Piano Trio are joined by Rachel Roberts (viola), begins as if were overture, a Lento where sedate cello, viola and violin lines develop into a lively central section where piano leads the strings on inventive adventures, before subsiding into reverie.  "Rhythmically dynamic" Parry scholar Jeremy Dibble writes of the secoind movement. Of the second movement, Dibble writes that "it combines fugitive moments of melody with a relentless, acerbic energy." A "more euphonious waltz in the trio" (with delicate piano tracery) provides contrast before a concluding coda of "even greater demonic impetus".  In the Andante, the strings develop the piano melody in more tonally ambiguous manner, recapturing the sense of mystery with which the Quartet began. The Finale is highly dramatic, the vividness of the scherzo now channelled with assertive vigour. The piano introduces the second figure with its overtones of Wagner (specifically Die Meistersinger von Nürnberg) . If Parry references Wagner, Brahms and Schumann, why not ?  By incorporating them into music distinctively his own, he is making a statement.  The coda functions, as Dibble says "as an apotheosis of the work as a cyclical whole" in that Parry reworks the ideas in the Lento with the "demonic" Scherzo "incorporated into the bravura display of the virtuoso-driven coda", which ends with exuberant flourish.

Charles Villiers Stanford disliked Parry's Piano Trio no 2 in B Flat minor, from 1884, claiming that the first movement was "quite unintelligible" and the last "too restless and foggy in sound".  Stanford's views on Parry were somewhat coloured.  Nonetheless, this is the most ambitious of the three piano trios, running at 32 minutes, neatly balancing the substance of the Piano Quartet.  The Maestoso defines the subjects that follow with elegaic sweep, the allegro con fuoco bursting forth intense passion.  Parry's structure of this movement owes much to Brahms, but, writes Dibble, "the Schwung of his ideas - the fury of the first subject, the characteristic falling sevenths of the transition,  the poetry of the second subject , the unusual reverie of the development and the dreamlike conclusion in  B major - is more illustrative of Parry's Dionysian headiness than of his Apollonian rationalism".  The Lento expands the "poetry" of the second subject, piano, cello and violin in elegant poise, the richness in the cello evoking darker undercurrents, underlining the contrast with the Allegretto vivace, which zips along with spirited élan - there's even a hint of  stylish dance.  Parry's mastery of structural form is displayed in the finale, where the stateliness of the first movements is reiterated, the central section marked by a violin idea  that "subtly refuses to settle unequivocally in the tonic key of B minor" until the final section, where a coda con moto replaces the con fuoco that went before. Altogether a more substantial and satisying programme than the first release, though equally well performed.
at June 21, 2019