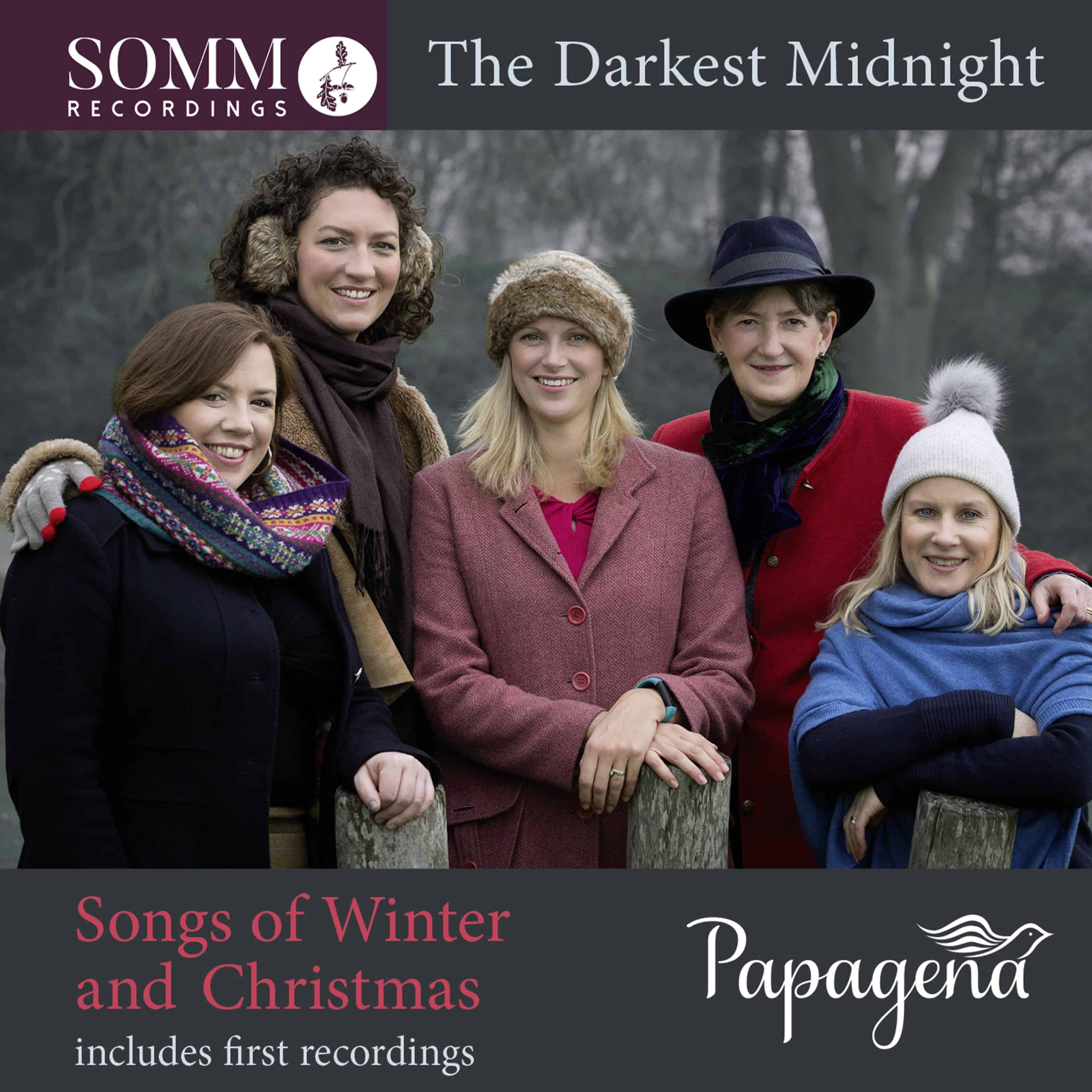 Darkest Midnight : Songs of Winter and Christmas - an eclectic collection of acapella songs on the theme of winter - with Papagena, a delightful offering for the Christmas season from SOMM Recordings : so enjoyable that you could listen at any time of the year. With Papagena, there are “No props, no microphones, no gimmicks, just five stunning voices“ who “explore the wealth of music from medieval times to the present day”. Their programmes “defy pigeonholing, drawing richly on traditional folk music and women's working songs as well as classical repertoire and new work commissioned for women's voices, many arrangements made by members of the ensemble. This disc is a rewarding purchase, even if you don't mark the season as a religious festival, but appreciate winter as a time for wonder and good music for its own sake.

Don eiche ud im Beithil (I sing of a night in Bethlehem) is a traditional Irish song with a text by a 16th century Archbishop of Armagh. Here it is heard in an arrangement where the voices blend in radiant polyphony. The sopranos (Elizabeth Drury, Abbi Temple, Suzzie Vango) sing with the purity of trebles, while the altos (Suzie Purkis and Sarah Tenant-Flowers) add warmth and richness. Part lament, part ballad, Maria durch ein Dornwald ging (Mary walked through a wood of thorns) is ideally suited for women's voices, given that it describes the trials of the Virgin Mary, walking through a forest of thorns, which suddenly blossoms as roses because she's carrying the infant Christ – a sacred work song for women, from the Middle Ages ! How refreshing it is to hear the Christmas story told from Mary's perspective ! In Nowell, tidings true there be come new, the voices are accompanied by a simple drum, as medieval songs often were. The text honours “A clean maiden and pure Virgin”. The singing is so delicate that it seems to cast a glow. Exquisite stillness in O Jesulein zart, where the altos sing in rapt adoration, cradling the sopranos.

In John Tavener's setting of W B Yeats' A Nativity, the lines stretch, the unison clear and shimmering. The balance of voices in Shchedryk (Hark How the Bells) creates a refrain with the effect of silvery bells pealing in harmony. Ballulalow is an arrangement made for Papagena of a 16th century Scottish song itself based on a poem by Martin Luther. The main melody is surrounded, like a halo, by tones as pure and bright as light shining through stained glass. Then Papagena springs a surprise – a song by Joni Mitchell, The River, transformed as if it were a modern carol. The alto sounds like Joni Mitchell, only more sophisticated and refined, though she captures the feisty irony that is part of Mitchell's style. Det lisle banet (the Little Child) is a traditional Norwegian ballad that tells of a farmer who leaves a fox in charge of his geese. But the fox kills them. In compensation the fox must make “soulgifts” to the farmer's child. A strange, unworldly parable told with dramatic effect. A single drum beats, at first slowly, then more insistently, adding a note of tension to the women's voices which keen as if they were recounting a primeval saga. There is much to listen to on this recording, which is much more than “Christmas listening”.