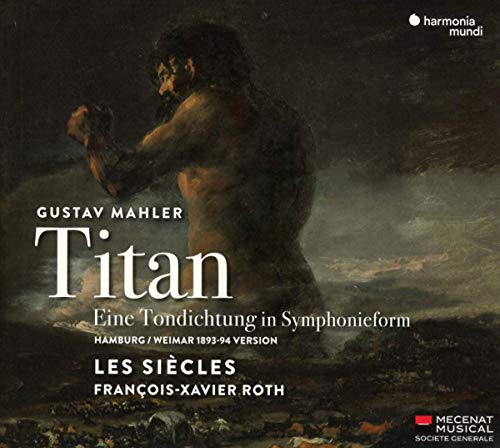 Not the familiar version of Mahler's Symphony no 1,  but the real" Mahler Titan at last, as it might have sounded in Mahler's time ! François-Xavier Roth and Les Siècles present the symphony in its second version, based on the Hamburg/Weimar performances of 1893-94.  This score is edited by Reinhold Kubik and Stephen E.Hefling for Universal Edition AG. Wien. This allows us, as Anna Stoll Knecht and Benjamin Garzia of the Médiathèque Musicale Mahler note, “to follow the genesis of this first large-scale work, (which) opens the doors of Mahler’s artistic workshop at a crucial moment in the creative process". Mahler extensively revised his very first version, premiered in Budapest in 1889. For the Hamburg performance, in October 1893, he described it as "The Titan, A Tone Poem in the form of a symphony" in five  parts, each with programmatic titles.  In Weimar, in June 1894, he adapted it further, so it was no longer a symphonic poem but a ‘symphony’. While the text accompanying the Weimar performance retained the programmatic titles from Hamburg, the score was now devoid of them, heralding the transition from symphonic poem to the Symphony in D major, as the Berlin version from 1896 was to be called. Donald Mitchell has compared this working process to building with scaffolding, which is later removed to reveal the finished structure. Even after publication, Mahler reserved the right to make further revisions, continuing to do so until the last performance he conducted, in New York in 1909.

While the edition of the score is of great interest, the performance itself is superb, definitely worth hearing on its own merits. Roth has conducted the standard version many times, but here he conducts  Les Siècles "sur instruments d’époque", using instruments of Mahler's time.  They use instruments which would have been used in  the pit of the Vienna Court Opera and the Musikverein, and selected Viennese oboes, German flutes, clarinets and bassoons, German and Viennese horns and trumpets, and German trombones and tubas. "These instruments are built quite differently from their French contemporaries" writes Roth. "The fingerings, the bores and even the mouthpieces of the clarinets were completely new to our musicians.  The wind instruments have a singular quality that exactly matches the rhetoric of the Austro-German music of that time, with a darker colour than that of the instruments then used in France. Perhaps they are also more powerful, and their articulation is a little slower. In the case of the string section, each instrument is set up with bare gut for the higher strings and spun gut for the lower ones. Gut strings give you a sound material totally different from metal strings, more highly developed harmonics, and incisiveness in the attack and articulation." Each instrument is individually identified, as are the players.

This approach to instrumentation infuses the performance, giving it an invigorating sense of vitality.  Given that Mahler was embarking on new adventures,  Roth and Les Siècles capture the spirit of the piece with extraordinary expressiveness.  The first movement of the first part, 'Frühling und kein Ende' comes alive from the start.  Period horns emerge from the rustling strings to create an earthiness entirely in keeping with the idea of Spring and burgeoning new growth.  The woodwinds call the "kuck-kuck" motif with such purity that they sound like birds.  The movement builds up to a crescendo so joyous that it seems to explode with energy and freedom.  In the song "Ging heut’ Morgen über’s Feld" the protagonist hears the birds sing "Ist’s nicht eine schöne Welt? Ei, du! Gelt? Schöne Welt!". Though the song ends on a minor key,  Mahler ends the movement with a punch of an exuberant timpani.

In the past, the 'Blumine' movement has been attached to what is now known as Mahler's Symphony no 1, even though the composer himself pointedly removed it.  The result is neither sympohony nor "symphonic poem" but a hybrid.  Mahler dropped the piece, finding it too "sentimental", a "youthful folly" ((Jugend-Eselei), and it does inhibit the flow of the symphony. 'Blumine' includes passages from "Der Trompeter von Säckingen", incidental music to a play he'd written in 1884. Hence the prominent trumpet part, which here is particularly beautifully played : almost as evocative as the post horn in Mahler's third symphony, though 'Blumine' is a much slighter piece.  The mellowness of the instruments Les Siècles employ enhances the section's function as a throwback to past times. There's not much point in including it as an add-on these days when the full symphony is is so well known, so it's better to hear it in proper context, as this new edition offers. It operates as an andante to the much more sophisticated scherzo of the (third) movement here. Originally titled "Mit vollen Segeln", it's played here with ebullient verve : the trio part earthy Ländler, part cheeky waltz.

Part Two of the Titan was titled Commedia humana (Human Comedy). It begins with "Gestrandet", a Totenmarsch inspired by an illustration of hunted animals following the cortege of a dead huntsman : the worldly order of power in reverse. Again, the usee of instruments Mahler himself would have known adds colour to this performance. The rhythms reference the folk tune Bruder Jakob: hence Mahler's comment that it should sound quaint "as if  slaughtered by a bad orchestra". Ländler values again, with echoes of the motif 'Auf der Straße steht ein Lindenbaum' from the song "Die zwei blauen Augen von meinem Schatz" with which Lieder eines fahrenden Gesellen ends.  The dark humour of this Dantesque "human comedy" comes to the fore in the last movement, an allegro furioso originally titled "Dall'Inferno". Such energy in this performance - proof that instruments of the right period can sound powerfully animated.  Roth and Les Siècles perform with intense conviction. Each section of the orchestra sounds alert, aware of what's evolving in the music : the triumph of some heroic force of life, blasting away death and venality. Hence the term "Titan", refering to Jean Paul's Bildungsroman, where wisdom is won through fire, in search of higher purpose.
at April 29, 2019

Wouldn’t the Ur-Titan be the Budapest version?

True, but this is the Hamburg/Weimar version

Is there a commercial recording of the first Budapest version? I heard a performance of it several years ago by the New England Conservatory's orchestra — the changes that Mahler made in the final movement are quite striking (and much more compelling than the way he'd initially handled it).

THe 1889 Budapest score exists and I think there was a performance not too long ago (Eschenbach I think. can't remember). But no idea if it's recorded. Wakasugi did the 1893 Weimar version ages ago. A lot of recordings claim to be Titan but are in fact the final published version with Blumine tacked on.

Mahler conducted the Hamburg version on October 27, 1893.
Mahler conducted the Weimar version on June 3, 1894.
They are not the same.
There is no Hamburg/Weimar version.
This score is a hybrid that involved choices by an editor.
The unadulterated Hamburg version is on YouTube.
Look up "Vriend Titan" for the complete score.
Check out the tympani at the beginning of the third movement scherzo.
In Mahler's handwriting.
It's not on the new Roth recording because the editor thought it was vulgar.

Anything new brings out the experts who get their expertise from Youtube. Of course the original performances are separate and the manuscripts are different. All editions involve choices and Mahler scholars like Reinhold Kubik and Stephen Helfing both of whom are very well respected, whether you know them or not. On what basis can you claim they left out the passage you refer to because it was "vulgar" How did you know it wasn't Mahler's own revision for Weimar ? But this IS a new edition based on both the Hamburg and Weimar versions - see the link below.