It's International Women’s Day which these year does matter more than ever, when the forces of small minded represssion are gaining power, all over the world, in many forms.  ears ago a young upstart advised me "Read more Feminist books". Uh? Like billions of others have done for millenia and are still doing today, I've learned the hard way. It isn't just about middle class western values.  Caring about people, as people, enabling them to have decent lives, these are the values that underpin the issues. And that's also why there's a backlash from those so insecure that their fragile egos need to be supported by hurting others. Real men don't need that.  At least half the world's population is female: We should be celebrating women who do what they do and their best, whoever they are.

But this is a music blog so I'll try to stick to music. We can, and should, be listening to women in music all the time.  It's impossible not to listen to musicians who are women : so many excellent soloists and ensemble players! It is an issue that sometimes they aren't paid the same as men, but they exist.   Making it to the top as a conductor or music director is tough, but that's tough anyway, and there's enormous nastiness in the business, not least of which comes from fans who don't actually listen.  It's about the music, not the ego of the listener. And there have been women composers for hundreds of years, not just in western classical music.  We need to know, and to keep learning. No bandwagon gestures, no instant fixes. No-one plays, writes or conducts with their anatomy, and that includes men. Only when gender is no longer an issue will we have reached common sense.

Picking out favourites  is invidious because good musicians are always themselves, and distinctive.  Over the years I've written a lot about a few special people, like Clara Schumann, whose greatest contribution was her pioneering role as a performer, travelling all over Europe, arranging her own gigs, transport, accommodation, publicity etc. at a time when there were few celebrity artists who supported themselves.  She's the equivalent of Chopin or Paganini, re-shaping the reception of classical music in the 19th century.  Yet still some think she needs promoting for the work she wrote to please Robert.  Hail thee, Clara, a working mother who was a breadwinner, who made Robert's career possible. 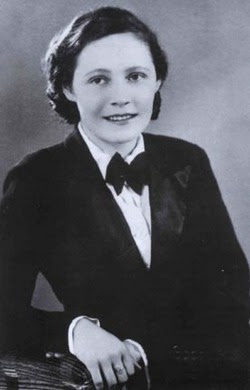 And Vítezslava Kaprálová, whi died aged only 25 yet left behind a considerable body of work.  From childhood, she came into contact with almost every big name in Czech music circles, so perhaps it was inevitable that she was something of a child prodigy. She started writing her own music from the age of 9 and entered the Brno Conservatory aged 15. She moved between Prague and Paris, developing a strikingly independent and original voice. She began conducting in her teens and worked with masters like Vítězslav Novák and Václav Talich. In her early 20's she was conducting the Czech Philharmonic and made a notable impact on her contemporaries, including schoolmate Rafael Kubelik. In 1938, aged 22, she conducted the BBC  Symphony Orchestra in her own Miliitary Sinfonieta (1937). Against the background of Nazi confrontation, it's quite a statement. Fierce, bright brasses suggest defiance, more lyrical passages suggest the endurance of more peaceful (possibly Czech)  values.. The tension between driving ostinato and themes of soaring freedom give the piece considerable sophistication. Perhaps we can even hear echoes of Janáček's Sinfonietta in the cheeky, rhythmic fanfare towards the end.  It may well be Kaprálová's humorous way of acknowledging quirky nationalist spirit.  Is the Military Sinfonietta "women's work" ? Of course not : it's a daring take on Janáček's Sinfonietta, by a young composer whose father was a Janáček specialist. She knew what she was doing. I've written a lot about her songs and piano works, which are a lot less famous.  (click on link below) 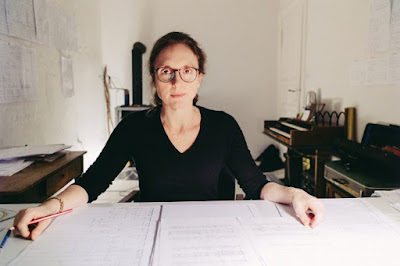 And then there's Rebecca Saunders, one of the best living British composers, which is saying something. Needs no special pleading : she's that good.  Plenty to find more about her on the net, and many opportunities to hear her music. Saunders  once described her method as being like looking at a sculpture from different angles, in different light, against different backgrounds. Yet Traces(2006,commissioned for Staatskapelle Dresden) operates on a much deeper level: hence the double basses, sounds as darkly sonorous as it's possible to get with string instruments,legato that curves and stretches and lifts off suddenly, to slide along from a different angle. It's like touching a work of art, "feeling" it intuitively. As a blind person might see, visualizing by instinct and emotion, surprisingly sensual.  In the second part,it changes tack. Sharper, brighter textures now, very high strings, though the same sense of sweeping curves, sculpting shapes in swathes of sound. It's like glissandi but created by a group of different individuals playing in such connection they move as a unit, stretching the palette beyond what a single instrument could do. Brass and woodwinds form similar blocks, so there's a sense of great forces rotating, revealing different aspects of sound as they move, leaving in their wake ripples of unpitched percussion. Towards the end the keening sounds stretch out, becoming so pure and clean the music seems to float into infinity.
at March 08, 2020