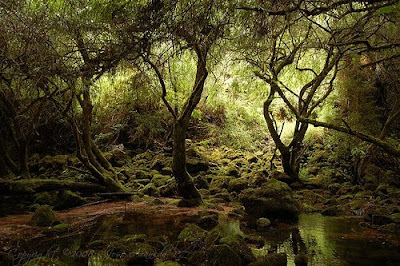 Many works by Martinů will be performed in this year’s commemoration of the anniversary of his death, but it would be hard to equal the impact of this performance. Much of its success was due to Magdalena Kožená, whose presence illuminated the whole opera, even though her moments on stage were fleeting.

A man arrives in a strange village where nothing seems quite right. The villagers have no memories to bind them to reality, so things unfold without sense or connection. But what is reality? The opera’s subtitle is “The Key to Dreams”, which implies a search for meaning, whether or not it can be unlocked.

From the orchestra emerges a lovely, haunting melody. The man thinks he’s heard it before, connected to a vague memory - a beautiful woman ? He’s determined to pursue the dream which seems to fade as fast as it unfolds. The woman is Juliette, shining bright and golden, “like a star in the firmament”.

Deeper the man goes, into a dark forest, where he meets a Seller of Memories, who sells photographs of exotic places. The man buys into the images, convinced that they show his past with the woman he’s searching for. Eventually the man finds himself in The Central Office of Dreams which people enter and leave when they sleep. On ferme! warns the nightwatchman (who was also the Seller of Memories). Wake or you’re forever trapped! But Juliette is such a powerful, seductive dream that the man would rather remain in eternal limbo than lose her.

Bohuslav Martinů’s Juliette materialized at the Barbican, London, in a new edition of the urtext, using the French version the composer wrote on his deathbed in 1959. He lived most of his adult life in France, so it’s perhaps poignant that he should return to his masterpiece in this way.

Hardly any staging was needed, for the action unfolds like a dream, utterly adrift from rules of cause and logic. Indeed, what narrative there is lurks in the music. The orchestral writing is densely vivid but at critical moments the density clears and a solo instrument takes centre stage. At first, it’s an accordion, then horn, clarinet and oboe, then a particularly evocative melody on piano which surrounds Juliette’s entries. It’s like in dreams where a single image comes into focus, like symbolic portent. Each time Juliette’s music returns, impressions deepen and become frustratingly familiar. Have we heard it before ? And where ? In dreams, the mind fixes on details and follows their trail. Martinů uses allusions from music as tantalizing clues. There’s a snippet from L’Histoire du Soldat, just before the Fortune teller scatters cards. Then, a quotation from L’Après-midi d’un Faune, evoking a mood of frustrated love and longing. The villagers lack memory so can't find meaning : the composer uses memory to extend it. Similarly, Martinů uses off stage noises and singing. Even when asleep, the mind hears what’s happening “outside” so to speak. At any moment the dreamer might be woken, the dream shattered. It’s psychologically astute, building dramatic tension into the very fabric of the music.

Jiří Bělohlávek has a specially sensitive feel for this elusive, mysterious music, which will come as no surprise to anyone who has heard his Janaček or Dvořák. This performance was as good as the superlative Excursions of Mr Brouček last year, which he conducted with the same forces, the BBC Symphony Orchestra and Singers. This production was also directed by Kenneth Richardson, who made such magic with the concert staging of Mr Brouček. Richardson’s intelligent, subtle style achieves great things by simple means. The forest, for example, is created by light and shadow, yet feels impressively alive.

Kožená was outstanding. Visually and vocally she glowed. While all the cast was good, she was exceptional, for Juliette is in an altogether more exalted league than ordinary mortals. Kožená’s fees might normally exceed the other singers fees put together, but here she was utterly worth it, for her presence embodied all that Juliette stands for. The role is so important that the whole opera rests on how well it is realized. Kožená has long championed Martinů’s music, so this magnificent performance was a great tribute.

William Burden sings Michel, the protagonist. It’s a long, demanding role which he carries off with aplomb. Also familiar to those who loved Mr Brouček was Zdeněk Plech, who made the relatively small role of The Old Arab/Sailor so interesting that you wished the composer had developed it further. Roderick Williams sang no less than four roles, including the pivotal Seller of Memories. He acts as well as he sings, and is certainly one of the brightest young British stars of his generation. When will he get the profile he deserves ? Andreas Jäggi’s Clerk was suitably tense and manic.

There are only two available recordings of Julietta, and the classic version is nearly 50 years old. Let’s hope this performance, which was recorded by the BBC, will make it to CD/DVD. Bělohlávek’s recording of Mr Brouček won the Gramophone award for best Opera in 2008, so perhaps this new Juliette will do the same.

This performance will be broadcast on BBC Radio 3 on Tuesday 31st March, available online for a week.

Read the original on Opera Today: