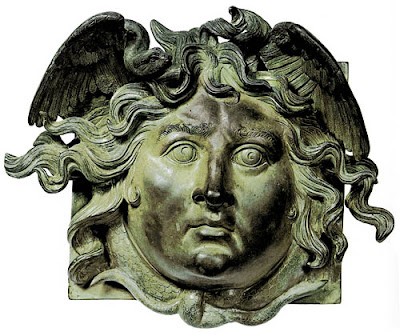 A few years ago, someone was talking to Detlev Glanert about his music, saying it was all doom and gloom. “But it’s not” said Glanert repeatedly, “My work uses humour”. Indeed, one of Glanert’s big hits was the comic opera Scherz, Satire, Ironie und tiefere Bedeutung (Jest, satire, irony and deeper meaning). Even his non-vocal works, like Mahler Skizze, and Theatrum bestiarum, are animated by wit. No matter how often Glanert said humour was his way of making serious points, his interlocutor insisted it wasn’t. It was a scene straight out of surreal drama.

Glanert’s Caligula is certainly not a laugh-a-minute comedy. It’s based on the play by Albert Camus. Caligula’s raving mad, but there’s a crazy, warped logic behind him. “I’ll never be alone”, he says, “the ghosts of those I’ve killed are around me”. Einsamkeit, Einsamkeit, he wails in self-justification. Eventually, everyone seems caught up in delusion.

Glanert was one of Hans Werner Henze’s few students, so this opera is meticulously crafted and works well musically as well as dramatically. Sounds range over no less than seven octaves, mirroring the extremes of Caligula’s personality, yet they don’t sound forced or strained. Caligula may behave like a wilful monster but to Glanert he has the naivety of a child, though a child given the lethal power of a Roman Emperor.

While the subject of this opera would lend itself to sensationalist treatment, Glanert’s approach is more subtle. Caligula may behave monstrously but he’s not a monster. Life itself is absurd, so Caligula’s way of making sense of things isn’t, of itself immoral. He’s a creature of instinct albeit a warped one. So Glanert is careful to make the role sympathetic. When the four poets appear, singing sentimental doggerel, their music is ghastly. When Caligula has them killed, we agree.

Vocally, the writing is sophisticated. Caligula’s baritone contrasts with the countertenor of his slave, Helicon. Significantly, when Caligula in his madness decides to take on the persona of Venus and marry the moon, he sings falsetto. Glanert’s music extends characterization. Caligula’s lines are often unadorned, reflecting the empty anomie that drives him to fill his life with murder. Orchestral accompaniment is deft. Glanert uses a concert organ which creates massive volume, without the complexity of a full organ : again this reflects Caligula’s mental universe. Glanert has a thing for organs – his Theatrum Bestiarum was written specifically for the organ at the Royal Albert Hall, making full use of its huge range to create complex “characters” within the sound, like an opera for instruments only.

Caligula was premiered in Frankfurt in 2006 and has been revived annually. It’s the kind of opera that you need to hear again to fully appreciate, for there are so many levels of meaning. If anything, the cast has grown with it too, so hearing it in its third year has advantages. Ashley Holland created the part and sings it with the conviction that comes from maturing into the character. His Caligula isn’t unsympathetic. Towards the end, he has a moment of clarity, which shows his vulnerability. Holland makes it painfully poignant. Holland’s worked a lot with ENO, singing Kellerbach, Gandhi’s friend, in Philip Glass’s Satyagraha in 2007. Hopefully we’ll hear him again soon in London.

Traditionally, countertenors are supposed to be angelic, like overgrown choirboys. Modern opera has liberated the voice type. Countertenors today have far more challenging repertoire to cope with. Martin Wölferl’s Helicon also shows depth of experience. His voice is gorgeous, but he brings a sharp edge of masculinity to the part, though it’s so much higher than normal range. A strong, butch Helicon underlines Caligula’s fundamental immaturity. Furthermore, Glanert contrasts Helicon with Scipio, the poet who stands up to Caligula, by writing it for alto in trouser role. In this performance, the part was sung by a young Irish alto, Paula Murrihy, with such strength of character that it was hard to tell whether she was male or female. This was good because the role isn’t one to be taken for granted and, vocally, an alto like this is a better foil for a strong countertenor like Wölferl.

Oddly enough, since Caligula has been very successful in this production, directed by Christian Pade, a completely different approach might also work. Given that Caligula is about the absurdity of existence, it’s quite possible that a “baroque” production might work even better. Baroque opera is uniquely surreal, making impossible premises plausible. Those who think of opera, or music for that matter, solely in late 19th century terms can’t get their heads round Monteverdi, Handel or Haydn. Yet it’s the very bizarre unreality of baroque that makes it fascinating. Conceptually, it lends itself to “modern” ideas, where rigid certainties no longer apply. How interesting it might be to see Caligula with stiff baroque sets, actors in powdered wigs, stylized stage action. Baroque audiences didn’t bother about vérité, since they knew very well that Romans weren’t like that. They went to the opera for fantasy, not reality. Glanert’s Caligula isn’t “history”, but symbolic. Pade’s overtly modern setting is pretty straightforward and indeed a bit busy. So why not embrace the fundamental surrealism of this opera by embracing the surreal values of the baroque ? It would turn ideas of traditional/modern staging upside down – the triumph of the absurd. Camus might have understood.

There is a DVD of this production, but I think I'll wait for audio. Please see my other posts about Glanert especially the one about Shoreless River at the Proms, which promises to be a major work.
at March 16, 2009