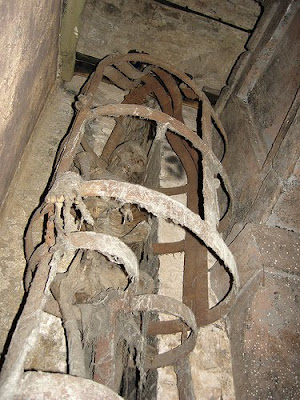 There's no such thing as non interpretation. Even reading a score is a form of interpreting what it might mean. When we listen, or go to a performance, we're listening to someone's interpretation. It might not match our own. But nothing is necessarily "right" or "wrong" : what it depends on is the rationale behind it.

The ENO Duke Bluebeard's Castle certainly is riveting as theatre so it's certainly worth seeing (at least for £15 thanks to the Independent). But how does it reflect the opera? And why is this production so popular?

Daniel Kramer, the director, comes from a theatre background, so he knows how audiences connect to headline sensations like the Fritzl case. When the fifth door opens, it reveals a warren of cubicles, from which groups of children emerge, the implication being that he imprisoned his wives and bred with them. At the end, Judith lets Bluebeard impale her with a sword. These images aren't in the score but that doesn't necessarily make them "wrong". The problem is that tabloid sensationalism thrills but does not go behind the headlines. And the whole point of this opera is about what's hidden from the surface.

Of course Duke Bluebeard is insane. But portraying him as Josef Fritzl or Phil Garrido is demeaning, to the opera and to the many victims, known or unknown, of such crimes. For one thing, there are Fritzls everywhere - several in Britain recently, which the jingoistic press plays down. If it's only "Austrians" who do such things, "we" don't need to look in our own backyards and face what might be lurking there. At least Judith wants doors opened, not closed!

Moreover, Fritzl's victims did not welcome or choose their fates. Judith, on the other hand suddenly walked out on her family and fiancé on the eve of a marriage that would have given her a castle warmed by roses and sunlight. Bartók's libretto could not be more explicit that it was Judith's conscious and deliberate choice to follow Bluebeard willingly. He certainly keeps warning her, but she's obsessed by the idea that she and only she can bring him happiness. She is not a passive victim.

So why is she so determined to "save" the Duke? What is so compelling about him? The Fritzls of this world do their crimes to hide their nothingness, but Bluebeard in the opera is more complex. He has it all - a castle, wealth, a sinister reputation and possibly charisma. Clive Bayley has to portray Bluebeard as a craven nonentity, twitching uncontrollably, whining rather than menacing. Obviously, he's screwed up inside, but there was something compelling about him that made Judith fall madly in love. Listen to his music. It expresses the tension between Bluebeard's outward magnificence and inward corruption. The opera is a journey into the horrors in his soul. It's the castle that trembles, not the man. And with something much more troubling than bad nerves.

Of course the man "is" the castle but the image - and the music - is much more powerful than the pathetic mess this Bluebeard is, right from the beginning. The horror in the music is so profound that revealing too much too soon dissipates its energy. That's another reason why revealing the children behind door 5 isn't smart. Sure, it gets "wow!" from the audience but it's not the wow! Bartók meant. The fifth door reveals "the fair and spacious country" the Duke rules. It doesn't have to be literal, but taking the idea to mean Fritzl's domination of his kids is a step too far. Even then, it might work if the image were supported in other ways, but it isn't. And the madness - or evil - goes far beyond sex, possibly even beyond and before Bluebeard. Bluebeard is a kind of Faust, who has everything, but cannot be redeemed by love.

Michaela Marten's buxom, upfront Judith had a lot of potential. Her Judith is no fool, and it would have been interesting if the production had focused more on Judith's personality and motivations. They go deeper than having her claw open the fly of Bluebeard's trousers. Maybe one day, we'll hear her in a production where she's not wasted.

Each door reveals some aspect of Bluebeard's might, but first impressions soon turn to blood and gore. Bartók doesn't spell out what the mysteries are. By the time we reach the last door, our imaginations should be tantalized so we're doing the staging in our own minds. Which is actually quite a terrible prospect, given what we might have hidden in our own psyches. But here it's neatly spelled out and spelled out early in a fairly narrow Fritzl context. As theatre it's dramatic, but what's "not" shown is often much more frightening.

Usually Bluebeard's Castle is paired with Schoenberg's Ewartung, highlighting the hallucinatory psychic delusion in each work. It's perfectly reasonable to pair it with Stravinsky's Rite of Spring because both also deal with the idea of purification versus pollution. Judith chooses willingly to enter Bluebeard's realm, just as The Chosen One chooses to die to save the earth. Fabulous Beast's Rite, directed by Michael Keegan-Dolan, has some good basic ideas, but could use more rigour. The animal heads appear in the 1913 original, and the nakedness and cross-dressing has a point. But visual images can be interpreted in different ways. After the men procreate fruitlessly with the ground, (the Rite is about fertility totems), white objects fall from the ceiling. Is it snow? Or cocaine, or dandruff or cigarette ash? Since the piece started with people smoking, maybe it's the latter. But that shows how visual images need to be supported consistently, rather than randomly thrown in.

Edward Gardner's conducting was too sedate and accepting. He must have been tryng not to upstage the productions. Maybe he should think more about Judith, who cared enough to take risks. She may not have escaped but she proved something and changed the status quo.
photo credit
at November 15, 2009