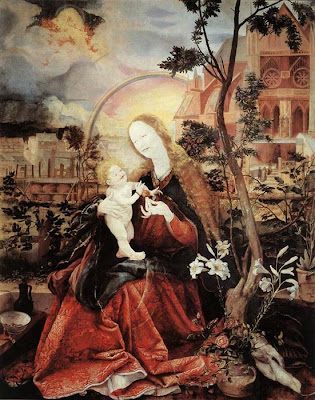 Hindemith's Das Marienleben has a formidable reputation, but is rarely heard. Soile Isokoski could change all that. Her new recording is magnificent. The 1948 version lasts an hour and is a tour de force, but tours de force need singers capable of achieving them. Das Marienleben needs an absolutely top-notch singer to do it justice. (Glenn Gould knew nothing about singing !) Isokoski is the first really big-name singer to record it since Gundula Janowitz 20 years ago. Moreover Isokoski sings with such fervent sincerity, the cycle becomes a statement of the human soul, as well as a great work of art.

Isokoski's recording, with pianist Marita Viitasalo, on Ondine is the new benchmark, not that there's been much competition. This is a performance that puts paid to all those ideas about whether the first (1922/3) version or the revised (1948) versions are better. Isokoski understands what the cycle means, and brings out its depths with the dignity and grace it deserves.

The photograph (click to enlarge) is the Stuppach Madonna by Martin Grünewald. See the faces, painted so they glow with an almost supernatural luminousity. Behind them stand buildings which represent the church and power, but the figures aren't really "of this world". Like the lilies in the foreground they represent something far purer and more rarified. When Grünewald painted it in 1518, he didn't realize how his world would be changed, irrevocably by the Reformation. Hindemith knew, and quite possibly that meant even more to him after he'd been forced into exile from Europe.

Sensucht lies heavily on Das Marienleben : it's the story of a life lived behind momentous events. Instead of writing about Jesus, Rilke focused on Mary, without whom the Jesus narrative would not be what it became. For Hindemith, it's deeply felt, hence the revisions, made not just as musical theory but because he cared about it. So much for the nonsense that "objective" music isn't emotional. Theories are fine, but good performance is real experience.

This is the secret behind the beauty of Isokoski's performance. She believes in it sincerely and communicates her love for the work. Hers is one of the loveliest voices around. She's exquisite in Mozart and Strauss. Her Strauss Vier Letzte Lieder is one of the best. She'll be singing the Marschallin in Der Rosenkavalier at the Royal Opera House in December. Despite her megastar status, Isokoski has always sung music she cares about, even if it's not commercially viable, which is more than can be said about some of her rivals in opera! Obviously she sings Sibelius perfectly, but it was she who showed how interesting other Finnish composers, like Sallinen, Madetoja, and Merikanto can be. She created the market. Her recordings of Finnish hymns weren't made for glamour, but because they're dear to her heart.

Das Marienleben is much like Messiaen's Vingt Régards sur l’Enfant-Jésus, not simply because of the subject, but because it unfolds contemplatively. The very first song, Geburt Mariã. was inspired by a passacaglia in Biber about the Resurrection, so the whole cycle is, in a sense, built around it. The beautiful first chords on the piano already hint at the ultimate purpose of Maria's life. The piano part is reverential, but the voice soars with supressed excitement at the miracle to come. Rilke's texts are lovely, but wordy, so there's no chance for easy strophic setting. Instead Hindemith makes a virtue of the long, flowing lines, often using breaks within the written line, rather than at the end, to create a sense of fluid movement.

Mariae Verkündigung describes the Annunciation. It starts with the same reverential pace that began the cycle, but grows to a crescendo of agitation when Maria realizes what the angel means. Then the calm figures return, and Isokoski blooms with confidence, "Dann sang der Engel seine Melodie".

The more distinctive songs aren't the obvious ones like Geburt Christi but those where Maria faces challenges, as in Rast auf der Flucht in Ägyptien, Vor der Passion and Pietà. Theologically, these are key moments, but Isokoski also makes them feel intimate and human. Her voice is naturally pure and lucid, but she colours her words with genuine emotion, to express the depths of Maria's personality. She wasn't picked by God for nothing. When Jesus turns water into wine, Maria rejoices, but her tears of joy will soon turn to blood. Hindemith paints the words "Blut geworden war mit deisem Wein" sensitively, "geworden" curling on itself, "diesem" and "Wein" stretching outwards towards what is to come.

The pain of Vor der Passion and Pietà gives way to tender reconciliation when Maria meets the Risen Christ. Her destiny is fulfilled, so the three final songs form a sort of inner trilogy which rounds out the cycle. Some wonderful moments here, when Maria, alone, faces O Ursprung namenloser Tränen-Bäche vowels meantto be sung with huge, open-hearted affirmation. When Maria dies, Rilke describes her passing wie ein Lavenderlkissen eine Weile da hineingeliegt, like a lavender pillow that leaves its scent even when it's taken away. Hence the confident, bright key of the final song, Vom Tode Mariä III, and the adamant ostinato in the piano at the end. "Mann, knie ihn, und sie mir nach und sing !" She's dead, but in a better place.

Isokoski and Viitasalo performed Das Marieleben in recital at the Wigmore Hall on Tuesday 10/11. Because the cycle isn't familiar, the audience had their noses buried in the text, rather than listening. But as my friend commented, "it's not like we don't know the story". Isokoski's German is excellent, and easy to follow although the way the words are set on the page in Wigmore Hall format, it wasn't easy to find your place in the middle of lines if you'd been listening and needed to look back. Also it is a long cycle, and some of the songs are six or seven minutes. It was a good idea to pause after the birth of Jesus, and to darken the hall between his death and resurrection, because it gave a structure, which reflects the structure in the music. Nonetheless the audience wasn't as attentive as they could have been, which quite spoiled the mood of hushed mystery. Performance is interactive, and Isokoski may have picked up on the lack of attention.

One thing the Wigmore Hall audience had that those who get the CD won't get was a decent translation. Ondine has used a 1923 translation which is horribly mawkish. Far better the clear, direct Richard Stokes translation which is much, much closer to Rilke's style.
A neater, punchier version of this is in Opera Today.
at November 11, 2009