Sacrifice of an Opera Singer

One of the finest Cantonese movies ever made, and one which deserves to be in the canon of world cinema, Parents Heart (父母心) starring Ma Tse Tsang  (,馬師曾) (1900-1962),  the paramount actor and opera singer of his era. As a young man, Ma was a megastar, galvanizing Cantonese opera, so significant that there's no equivalent in the west.   In Parents Heart, he plays a former opera star reduced to poverty by social change.  Watch this movie and learn a lot about the art of Cantonese opera, since performances are built into the narrative expanding the drama.  The film is also a study of Chinese values, but it's a universal story.  It's so sensitive, and so emotionally true that sometimes the intensity is hard to cope with, but its message is extraordinarily powerful. What keeps us going when life is too hard to bear ?  Love, art, aspiration and hope : utterly relevant for all.  Yet it's lost to western audiences, because it's not in English but needs an awareness of cultural background.

The title credits play out against a curtain on which two masks are placed, one smiling, one in tears : symbols familiar to all but here distinctively Chinese. Next we see neon signs : modern theatres and nightlife.  Opera has fallen on hard times, having to compete with movies and westernized entertainment.   The character Ma plays was once extremely popular but now he's reduced to playing in half empty, rundown theatres. Nonetheless, we're treated to a superlative performance -a masterclass in Cantonese rhythmic singing, a bit like Sprechstimme, but improvised and inventively spontaneous.  Listen to the phrasing patterns, and the imaginative variations on basic tunes.   Ma plays a scholar but suddenly breaks in to a march. "Quit fooling around" sings an actress "You're supposed to be singing"  Great as the performance is, the show is closing and the opera troupe breaking up.  So when Ma answers "These days, it's foreign things that count" you realize that his march isn't just improvisation but a cry of protest. Notice how the percussion clappers used to punctuate singing continue on after the show has ended and Ma relaxes with his friend Wong Chow San. The clicks suggest mounting tension. Gradually the background music turns to western orchestral (Sibelius) as in many "modern"dramas, but the point is made. Ma goes home with the pittance he's made but his wife (Wong Man Lei)  bursts into tears.  She's on the verge of a breakdown. Wong's performance is frighteningly well observed, and the way she and Ma interact is sensitively played.  Ma plays with his younger son Wai Tsai, but in the process is also teaching the kid the rudiments of opera improvisation and movement.  The boy is played by Yuen Siu-fai, who also appeared in Father and Son, read more here)  The elder son, Ah Kuen has been studying abroad but comes back on vacation.  He's played by Lam Kar Sing of whom more HERE.  Ah Kuen immediately notices that something's wrong with his mother, but both parent keep up pretences.  Although Ma is broke, he loves his boys so much he wants to protect them. He takes them out for a meal and buys the younger one a toy monkey.  Little Wai Tse wants to be like Dad and sing opera : another chance for play disguised as teaching.

Proud of his Dad, Ah Kuen invites his friends to the theatre.   Once Ma was a star, now he's reduced to humiliating bit parts. Watch the way he does acrobatic back flips, though!  Though Ma is dressed as a lion clown, his expression is heartbreaking. Ah Kuen realizes that his parents are broke. He can't bear to take the money his father gives him for school.  Ma bursts into tears : for his son, he'd sacrifice anything.  "I don't want you to end up like me, you need an education to set you up for life".  Unlike many stage stars and opera singers, Ma was a natural in close-ups, acting with great nuance and subtlety.

Ah Kuen can't get a job because he has no experience, so sneaks back to school but leaves the money with his mother. With the money, Ma redeems the opera costumes he'd pawned and starts busking on the streets.  A big come down from the past, but better than starving. Yet again, this is an opportunity for Ma to demonstrate the art of Cantonese opera. A long sequence of skits in which he plays roles which are both theatre and "reality", for example a sad clown cheered by the thought of having children.  Meanwhile Mother becomes ill.  Another well acted scene in which Ma and Wong face her death with mutual respect and tenderness.  After she dies, there's a long shot of Ma in the now empty house, looking at photographs of the family in happier  times.  Back on the streets busking,there's a wonderful vignette in which Ma plays a beggar who sees a gold ingot, which is grabbed by a succession of other players "No mercy in this world" sings Ma.  eventually Ma becomes unwell and loses his voice, permanently.  "If I can't sing,how can I live!" he cries. The busking troupe mates pool their own meagre earnings to help, but it's not enough. Wai Tsai misbehaves and Ma beats him with a feather duster.  "But I'm angry at myself", the father cries, "I didn't want to hurt you". Ma's ex boss, who was once his apprentice offers to train Wai Tsai for the opera. "I'd rather starve than seperate from you" the child cries,but the father knows  there's  no  choice. He walks away "Doesn't Dad love me ?" the child asks . A kind friend says "One day, when you're a parent,you'll understand". 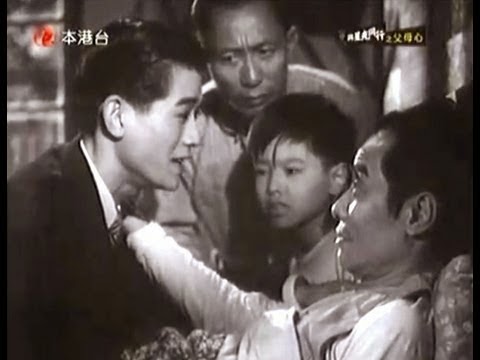 Wai Tsai has talent but he's preoccupied, worrying about his Dad. The boss offers to send him home, but the boy says Dad would be disappointed.  When the boy makes his debut on stage, it's a disaster. Everyone laughs. In the shadows, the father watches, feeling the child's humiliation. as if it were his own.  Once home, he looks at the portrait of his wife and says "I've failed him like I've failed myself - are you mad at me, dear wife?" A single shot lingers on the photo. Perhaps she understands.  Ah Kuen returns. He's graduated !  But Ma is on his death bed   Seeing his son happy has made his struggles worthwhile. "I'm not going to die!" he grins. "I've been through so much. But I could use a rest", his says as he expires. The camera then pans away from the decrepit room to a vista over the houses, facing the horizon.
at March 13, 2017