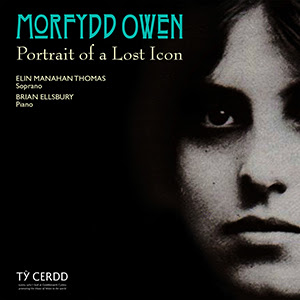 For my review of Morfydd Owen's Nocturne at  BBC Prom 8 please see HERE.   A new recording, made late last year,  Morfydd Owen : Portrait of a Lost Icon, from Tŷ Cerdd, specialists in Welsh music, reveals Owen as one of the more distinctive voices in British music of her era : a grand claim but not without foundation. To this day, Owen's tally of prizes awarded by the Royal Academy of Music remains unrivalled.  Though she was not part of the male English Establishment, Owen needs no special pleading.  Her music stands on its own merits, highly individual and original.  Her work was published in the Welsh Hymnal even before she graduated and moved to London, where she moved in Bohemian, arty circles with the likes of D H Lawrence, Ezra Pound and Prince Yusupov, one of the conspirators who assassinated Rasputin.  What might she have achieved, had she lived longer, or continued to develop in an international milieu ? Tŷ Cerdd have produced an intriguing collection of her piano pieces and songs, performed by Elin Manahan Thomas and Brian Ellsbury.  Definitely a recording worth getting, for Owen's music is exquisite, enhanced by good performances.  Buy it HERE from Tŷ Cerdd, who also supply scores. (it's now also available from amazon and other sources)


In his notes, Brian Ellsbury writes "One of the fascinations of (Owen's) compositions is the plethora of contrast, often simply between major and minor, melancholy and joy.....the juxtaposition of a self conscious  gaucheness and sophistication - the cosy homely feel of Welsh harmony suddenly layered with unexpectedly complex and deft modulations and almost modern jazz-like harmony,"

Owen's setting of William Blake's Spring (1913) is joyously energetic. "Little boy, full of joy, little girl, sweet and small"   Manahan Thomas's lithe, bright soprano perfectly captures the spirit of youth. In The Lamb (1914) Evans subtly underpins the deceptive innocence with richer, more contemplative undertones, never overloading the lines with pathos. Sophisticated, yet pristine.  In contrast, Tristesse (1915) with dramatic, exclamatory crescendi, very much in the surreal spirit of Maeterlinck,  though the text is Alfred de Musset. More hyperactive than Debussy, as exotic as Ravel, this is an unusually unsettling song that suggests not romance but fervid imagination.

A selection of pieces for piano, some like the Rhapsody in C sharp major and Maida Vale, discovered in unpublished manuscript. The miniature Little Eric (1915) is barely a minute long yet vividly idiosyncratic while Tal y Llyn (1916) is  confidently lyrical with a jaunty central motif - witty contrasts of tempi. Strong chords alternate with lively figures in Prelude in E minor (1914) , contrasting well with the early (1910) Sonata for Piano in E minor, which is more diffuse.

The Four Flowers Songs - Speedwell, Daisy's Song, To Violets and God Made a Lovely Garden  were written over a period of seven years, Speedwell (1918) being among Owen's last completed works.  A speedwell is a weed, but cheerful and perky, but here it dreams grand dreams. In a way, this song might encapsulate Owen's idiom, lending seeming insouciance with great inner strength.  God made a Lovely Garden (1917) reveals Owen's gift for melody, expressed with sincerity, not sentimentality.

A long, pensive piano introduction opens Gweddi y Pechadur (1913), the only Welsh language song on this disc. Although neither texts nor translations are included with this recording, the clarity of Owen's setting displays the innate beauty of the language, a "singing language" if ever there was one, and a good reason why non-speakers should study the song.  It is a dignified lament, in minor key.  To Our Lady of Sorrows ((1912) is a miniature scena, in which the Mater Dolorosa contemplates the body of Christ.  Like Gweddiy Pechadur, its lines descend to diminuendo, but the last line packs a punch. Suddenly, the Mother isn't a religious icon, but an ordinary, human woman. A sudden leap up the scale, and passionate mellisma on the word "Baby" and an equally sudden hushed, hollow descent on the words "is dead".

Photographs show that Morfydd Owen was a beauty with dark hair and eyes, to match what might have been an intense, passionate personality. She had love affairs, requited or unrequited, but after a courtship of only six weeks, married Ernest Jones, the psychiatrist, and acolyte of Sigmund Freud.  Perhaps Owen needed a father figure, despite her talent and acclaim: she wasn't independently wealthy.  Jones didn't encourage her career, and she seems to have been unhappy.  In September 1918, the couple went on holiday in Wales, where Owen died suddenly in uncertain circumstances.  This recording concludes with In the Land of Hush-a-bye, with words by Eos Gwalia "The Nightingale of Wales", aka Gaynor Rowlands (1883-1906), a Welsh actress who lived in London, who, like Morfydd Owen, died young from complications after surgery.  The song is simple, yet charming, and includes Owen's characteristic use of sudden leaps within a phrase. At the end, Manahan Thomas holds the last word for several measures until it fades into silence.

Please also see my article on  Morfydd Owen's Nocturne Talent  has No Gender
at March 25, 2017