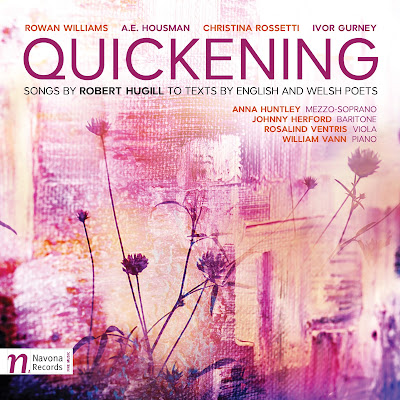 Quickening - Songs by Robert Hugill is now out on Navona Records.  Hugill sets texts by well known poets like Ivor Gurney, A E Housman and Christina Rossetti, but gives them new life. With lively young singers like Johnny Herford and Anna Huntley, this is a disc worth hearing, though it might take some tracking down as it's not on the commercial bigtime..

Full marks to Hugill for confronting the "dark secret" of A E Housman !  In Housman's time, same sex relationships were illegal. A man's life could be destroyed were he to openly love his fellow man except in religious terms.  To Housman's credit, he was honest enough to confront his feelings.  Housman has probably been set by more English composers than any other poet, but most skirt around what may have been closest to Housman's heart. Prejudices don't die. A few years ago I met a man who claimed to have set Housman's complete works, but went hysterical when I mentioned gay love.

Hugill, however, chooses four poems in which Housman makes veiled references about his unrequited love for Moses Jackson, and turns them into a cycle describing their relationship.  Hugill sets the line "He looked at me, he looked at me" with suppressed excitement, suggesting an intimacy which might lie behind an innocent gaze.  But Housman misread Jackson, who was so shocked that he left England, never to resume their friendship. Thus  the poem "He would not stay for me, and who could wonder?" is set with bitter brevity. "Because I loved you better than  it suits a man to say" is Housman's most explicit statement.  The piano part is deceptively lyrical at first. Then the poet imagines himself dead."The lad that loved you was one that kept his word."   The poem A.J.J. was dedicated to Jackson's brother, but the feelings therein could also apply to Jackson himself who also died young.  Hugill's setting of Housman's When summer's end is nighing (2016) written eight years after the Jacksdon cycle is a reflection on autumnal loss.

With Quickening, settings of six songs by Christina Rossetti, more melancholy brooding. Victorians got off on death. The mood is lightened by Rossetti's girlish femininity, so the poems are set for mezzo, viola and piano.  The Rossetti songs mark a welcome break from the gloominess that shrouds the texts on this disc, which Hugill respects rather too carefully. The cumulative effects can be offset by listening to the groups of songs at different stages. There are four songs set to texts by Ivor Gurney.  More unusually, Hugill sets three  poems by Rowan Williams, the former Archbishop of Canterbury, part of a Winter Journey which bears no relation with Winterreise, being a traverse through the times of a day in winter - Morning, Afternoon and Evening.   Williams's texts don't sing as naturally as Housman's do, and Afternoon is particularly wordy.  Normally respecting text closely is a good thing, but less so in this case.