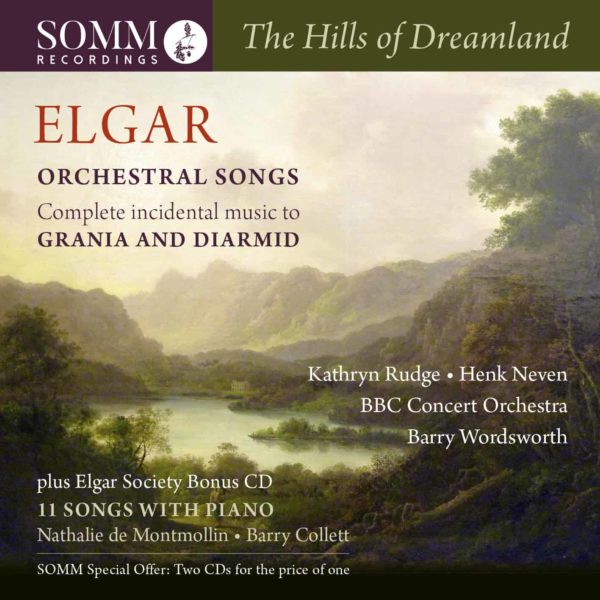 The Hills of Dreamland - Edward Elgar orchestral songs, new from Somm Recordings, sponsored by the Elgar Society.  Elgar's genius for oratorio, and large scale works for orchestra and voice somewhat eclipse his ventures in art song, apart from the masterpiece Sea Pictures, and the more recently acclaimed Fringes of the Fleet. Those who have treasured  SOMM's first collection of Elgar songs for voice  (with Catherine Wyn-Rogers, Christopher Maltmann, Neal Mackie and Malcolm Martineau) will seek this out, for they make good companion pieces. In any case, there are some real treasures here, such as  Elgar's Song Cycle op 59 which deserves greater appreciation. Heartfelt thanks to SOMM Recordings for bringing this back into the repertoire.

The first disc in this 2 CD set (offered at the price of one) features Elgar's Song Cycle op 59 and his Two Songs op 60 plus Pleading, The King's Way, Follow the Colours and incidental music to Grania and Dairmid.  The soloists are Kathryn Rudge and Henk Neven, with Barry Wordsworth conducting the BBC Concert Orchestra.  Elgar's Song Cycle op 59 was initially planned as a set of songs to texts by Gilbert Parker, a Canadian born novelist who was later to be knighted for services to Britain during the 1914-18 war.  "O soft was the song",  "Was it some golden star ?" and "Twilight"  are tender, and almost elegaic. They were written for a concert in memorial of A J Jaeger, Elgar's friend, whom he immortalized in the Enigma Variations.  Henk Neven's burnished timbre gives them personal, intimate warmth.  The cycle develops to a high point with "The Wind of Dawn", initally written in 1888 to a poem by Alice, before she and Elgar were married. In its original form it was a song for voice and piano.  In the bolder orchestration the strings surge, suggesting heaving passion, since the text is daringly erotic, for the era. The full orchestra rises to expansive crescendo, the mezzo (Kathryn Rudge) soaring above. It is a song worthy of Sea Pictures, and indeed, the imagery includes references to "the sea stream'd red from the kiss of his brow". A pity it was created after Sea Pictures had made its mark.  It would be interesting to speculate why Elgar concluded this cycle - for it is a cycle - with "The Pipes of Pan". the words are by Adrian Ross who wrote hits for musical theatre, though this text refers to Greek mythology.  But Pan is the god of fertlity and robust disorder,  a shepherd whom polite society cannot contain. Pan is a musician, too,who plays his pipes and enchants those who pay attention.  This song therefore connects to "The Wind at Dawn",  with its fulsome sense of adventure. Ever enigmatic,  Elgar could be making cryptic links between himself and his muse Alice, thus affirming the joy of life even at a time of sorrow.

More secret humour in the Two Songs op 60, poems purportedly by Pietro D'Alba, who was in fact young Carice's pet rabbit.  The words are Elgar's own, and whimsical, the compsoer claiming that they were folk tunes from "Leyrisch-Turasp, 1909", a place which doesn't exist.  Nonetheless, the fantasy gave Elgar a chance to write florid mock-Slavic drama, crashing climaxes blending with delicate expressiveness.

Pleading op 48 is a reverie which might suggest Richard Strauss in autumnal mood, but we're back to exuberance with Follow the Colours: a Marching Song for Soldiers  written for the Royal Albert Hall's Empire Day in 1908. The text, by a military officer,  is jingoistic,  but Elgar seems to relish the opportunity for high spirits. The deliberately four square rhythm evokes images of "Thousands, thousands of marching feet" stomping mindlessly in strict formation.  Thus The King'sWay isn't as banal as it might seem on the surface.  It surges forth with almost parodic expansiveness. "Let every voice in England say - God keep the way by night and day - The King of England's Way!"  But the poem - again by Alice, who must have had a sharper mind than she gets credit for, refers explicitly to the "newest street in London town - the Kingsway" which had recently been constructed. destroying much older parts of London in the process.

William Butler Yeats and George Moore collaborated on the play Grania and Diamid, a Celtic Revival tale of ancient Ireland. Elgar sets the Introduction with dark, brooding chords which suggest forests and mysterious forces. Hunting horns are complemented by harps, for this is an Irish, not a Teutonic Wagner saga.  "There are seven that pull the thread" is a keening song of mourning, with lush harps and strings, written for low female voice. It's Elgar, but he doesn't seem to have been much taken by it.

The second disc in this set features eleven songs for voice and piano (Nathalie de Montmollin, Barry Collett)  which have not previously been recorded.  They are enjoyable, but the first disc, with the orchestral songs, is the one to focus on.
Please also see my reviews of Hubert Parry Complete English Lyrics, also from SOMM HERE
at August 18, 2018