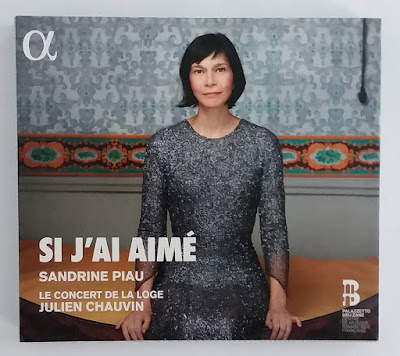 These mélodies reflect the renaissance of French poetry in the Romantic period, and of contemporary poets like Hugo, Gautier, Banville, Régnier and Verlaine.  The enhancement of verse by music created a new genre, taking art song from the confines of private salons to the concert hall.  Although grand opéra took centre stage, many composers found, in mélodie an expression of more subtle sensibility.  Given the predominance of grand opéra and of singers trained in that tradition, the vocal parts are more elaborate than they would be in a more inward form like German Lieder, but are exqusitely refined. These settings focus on voice, eschewing brass and percussion. "But how many nuances these composers coud obtain from this palette", writes Hélène Cao in her notes. "There is no oboe in Aimons-nous (Saint-Saëns) or Ce que dit le silence (Guilmant) .....the arpeggios of Saint-Saëns' Extase are provided by the harp, thus preserving the lightness of a pianistic texture that would have been weighed down by the use of bowed strings". Indeed, the harp is a distinctive feature in many of these mélodies, more lustrous and liquid,  closer to the human voice, and particularly to the female voice.

The delicacy of Piau's timbre in Saint-Saëns' Extase (Victor Hugo) is exquisite, almost trembling with ecstasy, the moment of intimacy in the text living vividly on in memory.  her vouce is agile, capturing the fluttering fragility in Papillons (Renée de Léché) where a pair of flutes duet, darker winds and strings adding texture.  The song ends abruptly, for butterflies die once the summer is over.  In Charles Bordes's Promenade matinale (Paul Verlaine) , the pace is leisurely, evoking a stroll in the morning sunshine. A horn is heard, illustrating "un chemin de gazonque bordant devieux aulnes", introducing shade, for the dreamer has lost the one he or she had loved. This connects neatly with the well-known Berlioz Au cimetière from Les nuits d'été.  In Jules Massenet's Le Poète et Le Fantôme, to an anonymous text, the vocal line stretches languidly, as the poet addresses a phantom, the soul of the poet's smiles, ie a memory of the past.  The voice of the harp mirroring the voice of the singer. The poem is strophic, its repeating patterns suggesting there will be no resolution.  Gabriel Pierné's Chanson d'autrefois, for chamber ensemble, is like a folk air, being based on the composer's set of childrens's piece Album pour mes petits amis. Théodore Dubois' Si j'ai parlé....si j'ai aimé (Henri de Régnier) is poised, "c'est ton ombre que je cherche".

The repose of Saint-Saëns Aimons-nous (Théodore de Banville) merges into the serenity of Massenet's Valse très lente,  originally for piano, here scored for lyrical winds and strings. Saint-Saëns'  L'Enlèvement (Hugo) was written when the composer was only 13 years of age, but the woodwind melody has finesse. The grave movement from Benjamin Godard's Symphonie gothique op 23 is followed by the famous Plaisir d'amour, in a transcription by Hector Berlioz after a romance from the 1780's by Jean-Paul-Ègide Martini.