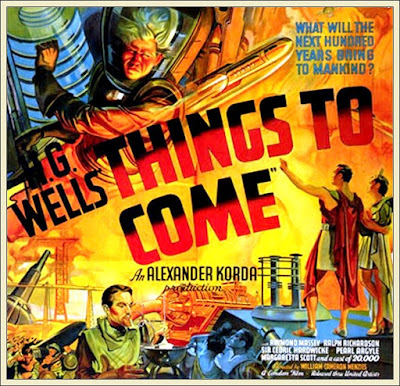 What will the next hundred years bring to mankind ?  Time to revisit the British cinema classic Things to Come, based on H G Wells' story The Shape of Things to Come which was a sensation in its time (1936) produced by Alexander Korda, directed by William Cameron Menzies, with music by Arthur Bliss.

In Everytown, which resembles Central London, it's Christmas. Crowds are rushing round fancy shops lit with new-fangled neon lights.  In the sound track, a choir sings the carol "God rest you Merry Gentleman" on the phrase, "May nothing you dismay", the brass fanfares scream and the pace slows to rigid march.  Newspaper headlines warn of war. At a family party, kids play with new toys while their elders discuss progress. "If we don't end war", says young Mr Cabal (Raymond Massey), "war will end us". "War stimulates progress" says his optimistic guest.  Suddenly, bells are heard, ringing.  Not for Christmas, though. Sirens sound, and gunfire. Everytown (and the Battleship Dinosaur) is being bombed.  The country mobilizes for war.  Diagonal shots, people running in different directions, rows of soldiers superimposed on one another.  Nothing new for those used to Fritz Lang's Metropolis (1927 - please read more here) and other futurist films, German, Russian, French and Italian.  Smoke, explosions, bombs, tanks, more aeroplanes together than could fly safely in formation, and poison gas. For Brits, who came to art film later, this must have been thrilling stuff.  Wonderfully discordant music - not what you'd associate with Arthur Bliss. Here's he's wildly uncompromising.  He had, after all, seen war up close. Bliss made a Suite based on the soundtrack, (see below) which premiered before the film was released. Clearly, he knew he was on to something good. 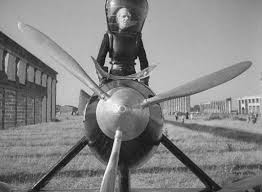 And so the war continues, (to 1970!) the city in ruins, the people reduced to primitive squalor. A  plague "like the Black Death of the Middle Ages" stalks the land. Fearing infection, the healthy turn on the sick.  A man has a car,  but no petrol. It's pulled by horses. Yet even that technology makes him a Chief  (Ralph Richardson) .  Suddenly, a machine lands, a new kind of aeroplane, manned by a man in a black futuristic costume. It's Mr Cabal. He's come from "Wings Over the World". Decades of war have destroyed civilization but WOTW,  "the Brotherhood of Efficiency, the Freemasonry of Science", technocrats pledged to save the world, based in Basra.  Prophetic yet ironic, since strategic control over oil supplies makes much machine-based technology possible. Think of what's happened to modern Iraq.  "We don't approve of independent sovereign states" says Cabal, though his utopia controls the sky (it builds aeroplanes) and seas.  The Chief plays along, helping Cabal, thinking machines will help him with the war, "The Peace of the Strong Arm.... we are warriors, not mechanics ! we have been trained not to think, but to die". Eventually, Cabal gets word to his people and they invade, using a gas that puts people to sleep without killing them, though the Chief drops dead. Thus the Brave New World of Progress, enforced by benevolent  technocrats.More long sequences of machines, production lines, the building of vast machines. Though it's not on the level of Metropolis, this is one of the best sequences in the film, and Bliss's music rises to the occasion - pounding staccato, wailing winds, ferocious brass. Not quite on the level of, say, Antheil's Ballet mécanique or Mosolov's The Iron Foundry or practically anything Varèse, but still....  Had Bliss done more of the same, one wonders where he could have gone. This would have served him well in the brave new world of the Festival of Britain and 1950's progress. 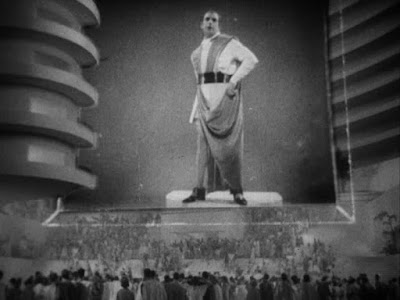 A hundred years after that fateful Christmas, the people of the world live in idealized luxury, under the ground.  Cabal's great-grandson Oswald now heads the Wings Over the World. In this new art deco Paradise there are plans to explore the Moon, using a "Space Gun" (No rockets on the horizon in 1936)  But some things don't change. "What is the point of progress? " cries a new Chief, the demagogue Theotocopulos (Cedric Hardwicke),  his image emblazoned on gigantic screens, preaching to his followers in a chilling foretaste of modern media maipulation, "We demand a halt - the object of life is "happy living" ! ... Let this be the last day of the scientific age - Destroy it ! NOW!"  Whipped up by fear and strange rhetoric,  the crowd roars in assent. Inflamed, they move upon the Space Gun to destroy it and what it stands for, armed with bars of metal, bent on violence.  As the demagogue screams, the mobs march, swarming over the vast machine, like a horde of maddened hornets.  "Beware of the concussion"!" warns Cabal as the Space Gun is fired, to no avail. The capsule heads off towards the moon, in a beam of light. The will to explore cannot be extinguished, "For Man, no rest, no ending...", says Cabal, "til all the laws of mind and matter that restrain him are conquered. For if we are no more than little animals, we must snatch each scrap of happiness .... it is all, or nothing ! which shall it be?"As the screen fades, an unseen choir echoes his words "Which shall it be!" in ringing affirmation.

Please also see my Gunshots fired at the Royal Albert Hall which shows how different Bliss's achievemnt was from "ordinary" music written for film.  In Things to Come, Bliss's music was part of the concept : it was more than music created to provide a soundtrack