Joyous Messiaen From the Canyons to the Stars.... Oramo, BBCSO

Prom 13, Olivier Messiaen Des canyons aux étoiles... (From the Canyons to the Stars...). Sakari Oramo conducting the BBC Symphony Orchestra. One day, I want to hear this outdoors, with the sky above,  surrounded by endless horizons. Sure, the sound quality wouldn't please nit-picking audiophiles, but those who love music might understand.  As the composer himself observed, when you are in a canyon, the only way to look is upwards, towards the stars.  In Paris, he spent much of his time in Saint-Sulpice, cramped up high above the nave in the organ loft.  In Bryce Canyon, Utah, he experienced a “cathedral” of another kind, where the vast stone walls of the canyon rose up like walls, enclosing space, but opened, roofless, to the skies. Direct communion with the universe and all its wonders!  Messiaen was a visionary, for whom all creation was a celebration of a God who made the universe and  its wonders.  From the Canyons to the stars.... is Messiaen's response, creating in music a panorama of sounds, textures and colours.

Messiaen's"canyon", isn't just a literal depiction of landcape, but a visionary communion with creation and its Creator. This is no minor achievement. From the Canyons to the Stars..... is nearly two hours long, a series of 12 individual sections, but together they form an epic journey.  Just as the colours in a landscape change with changes in natural light, the traverse is a reflection of the passage of time. "Man hasn’t been on this earth that long”, Messiaen said. "Before us there were prehistoric monsters, but in between there were birds". And before birds and dinosaurs, the geology of the Earth itself. The very character of From the Canyons to the stars.... is shaped by these concepts. The orchestra isn't huge. but each instrument is used for maximum effect. The smallest instrument in the orchestra, the piccolo, plays an important role, just as the smallest bird in a dawn chorus can be heard distinctively.

The range, too, is eclectic. Messiaen even created a new instrument, the geosphere, where actual rocks are placed in a flat drum  and shaken, the earth thus employed to make "earth sounds" in a concert hall environment. Earth sounds everywhere-the wind machine, the thunderboard,  tubular bells which suggest the flow of water, wooden blocks beaten together.  Sections for orchestra are balanced with sections for solo instruments: Nicolas Hodges (piano), Martin Owen (horn), David Hockings and Alex Neal, (xylorimba and glockenspiel). These unite the instrumental logic. The piano is a percussion instrument, the horn's sounds created by human breathing, the xylomarimba a percussion instrument whose sounds reverberate through tubes,like lungs, the glockenspiel a fragile predecessor of the piano. From the Canyons to the stars.... is big because its subject is big, but the foundations are strong, and logical.

In the first part, starting with Le Désert the parameters are set out.  The brass carved out firm shapes, the piano (possibly representing man), was clearly defined, the sounds of the landscape swirling around.  Rhythms darted at odd angles, but were purposeful. Messiaen observed how birds move on the ground, confounding predators. Sometimes they creep quietly on the ground, but sudden fly off unpredictably. That’s how they survive. Thus the jerky changes of direction, and sudden leaps from activity to silence, large blocks juxtaposed against fast-flying fragments. Oramo handled the shape well, bringing out the originality that is so fundamental to Messiaen performance practice.  He has a good feel for the zany, quirky character in this music. His Turangalîla-Symphonie was wonderful because he doesn't tame the wildness. (Please read Sublimated sex in theTurangalila Symphony here).  He also gets the "technicolor" moments in Messiaen, as the climaxes in this performance showed.  Cedar Breaks et le don de craint ended with style, and Zion Park et la cité céleste.  even more expansive, concluded with such élan that it was clear what Messiaen meant : the glories of nature are a foretaste of the glories of Heaven.

Nicolas Hodges' solos captured the spirit,too. For a moment, time seemed to stand still, while the piano does a “display dance” like a bird showing off its plumage. Martin Owen’s horn seemed to be exploring the vast cavern of the Royal Albert Hall, repeating itself more quietly, as if from a distance. The glockenspiel and xylomarimba solos were expressive, like birds or animals from cover in the landscape of the wider percussion, treasured all the more because their appearances are so fleeting. 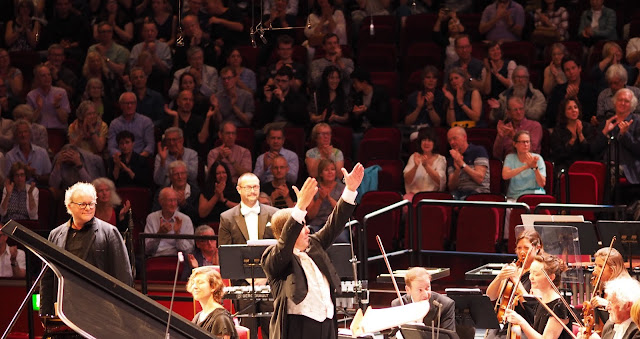