Secrets of the Sahara !  Two magnificent evocations of the Sahara and its seductive mysteries : Félicien David's Le Désert (1844) an ode-symphonique, and Jacques Feyder's film L'Atlantide (1921).  Both are long term favourites, but the soundtrack in the restored version of the movie is pretty banal, so I muted and played Félicien David's Le désert instead.  The combination worked extremely well !

Perhaps it's because the rhythms of Le désert so strongly resemble the rhythms of a caravan of camels marching single file through the desert. Scored for narrator, orchestra, tenor and choir, the piece unfolds at a steady pace, unhurried yet purposeful.  For thousands of years, caravans like these have crossed the desert : it is as if  the endless sand dunes (depicted by the strings) defy Time itself ; the tracks of the caravan erased as soon as the caravan has passed.  David lived in Eygpt from 1833-35 so the atmospheric exoticism feels drawn from lived experience. Le désert  was sensationally successful in its time, and was to influence the whole genre of French orientalism. If it isn't as well known today, other than to fans of the genre, this might be because it doesn't fit modern ideas of form. David wrote operas, but Le désert is neither opera nor conventional concert piece and requires fairly large forces which make it relatively tricky to programme. In David's time, this form was relatively common (think Berlioz) so it needs to be appreciated as such.  This means performances of a vey high and idiomatic standard. 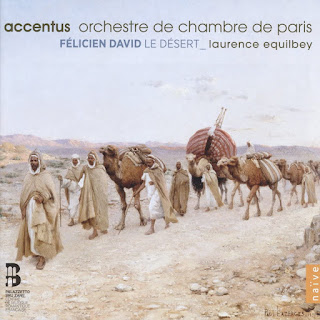 David's depiction of the sound of Arabic/North African music aligns to sounds very different from the western tonal scale.  The role of narrator is fundamental, holding the piece together and giving it shape.  Dawns rise and nighgt descends : As darkness falls,  the tenor sings the exquisite "O Nuit!"(Hymne à la nuit), suggesting the night sky with boundless horizons. This song is a tour deforce for a very high tenor or countertenor in the tradition of Grand Opéra. By far the best recording to get is the one with Cyrille Dubois and Zachary Wilder, tenors; Jean-Marie Winling, speaker; Accentus, Orchestre de chambre de Paris, conducted by Laurence Equilbey from 2015.  The few copies left on the market retail over £50 so if you have it already, treasure it and accept no imitations.  Dubois's timbre is unique. His voice soars to stratospheric heights, then swoops downwards while remaining elegant. "Le chant du muezzin" resembles the call of a muezzin, carrying over great distances, calling the faithful to mark the start of a new day. Another reminder of the vast distances of the desert, and of the timelessness of experience.

Eighty years forward to Jaques Feyder's film L'Atlantide,  innovative on many levels.  This, too was innovative, shot on location in Algeria in the desert, employing Algerians in major supporting roles and dozens of locally-recruited extras . No fake blacking up, and earnings for local people. the difference between French colonialism and other forms of colonialism, including Hollywood could not be more pointed.  The sand dunes themselves provide an underlying narrative, which no set of the time could imitate.  The scenery is authentic, too,  showing native villages as they were at the time, and spectacular mountain cliffs.  Even the indoor scenes were assembled on site, using regional textiles like carpets, combined with stylized designs reminiscent of the fashion for "primitive" alien cultures, that made the Ballets Russe so popular. To audiences in 1921, this must have been a revelation to people who weren't used to seeing foreign places in such deatail, or, indeed, to moving images.  L'Atlantide became a box office hit, also starting a trend for films set in exotic places, like The Sheik (1926) with Rudolph Valentino, and Pabst's 1932 remake of L'Atlantide starring Brigitte Helm, both made with assumptions that western values went unquestioned.

Like David's Le désert, Feyder's L'Atlantide employs cyclic narrative. A Frenchman (Lt Saint-Avit) is found wandering in the desert, maddened by thirst and bizarre visions.  Only towards the end do we realise  he's telling his tale back to front. Back to the beginning : he's invalided back to France under a cloud.  suspected of being involved with the mystery disappearance of his friend and mentor, Captain Morhange. Two years previously, a French expedition had been massacred  and the leader Lieutenant Massard had been captured.  Morhange and Saint-Avit approached the desolate mountains of Tidefest, taking shelter in a cave at the approach of sandstorm. Inside, they found insciptions in early Greek with the name "Antinea". Danger lurks. Their faithful guide is poisoned and they turn to a Tarqui from Haggar, Cegheir ben Cheik who suddenly appears, to lead them deeper into the caves below the mountains. Cegheir ben Cheik intoxicates them with hashish. He's smoking Lt. Massard's pipe.  The Frenchmen are catured and taken to the palace of Ahaggar. Both men are bathed, massaged and treated well but they don't know where they are, or why.  In the place’s archive, they meet a librarian who tells them that they are in the centre of Atlantis, ruled by Altinea, descendent of the first Atlanteans. He takes them to a tred marble room filled with solid gold sacrophagi and pins a name on the latest arrival "Lt. Massard", whom Morhange had seen jumping to his death. These are the husbands of Altinea, who die, insane, when she rejects them.  Only one has ever escaped and he made his way back, unable to break the spell. 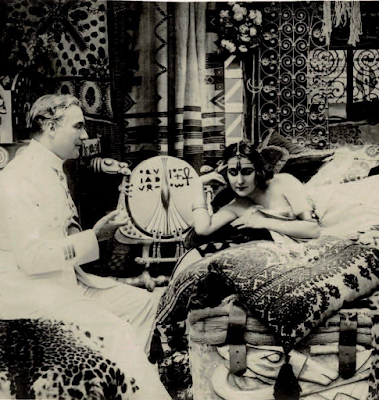 Altinea wants Morhange but he will not be seduced. Altinea is like a wild animal, slithering like a serpent, eyes always alert to her prey.  Those palpitations might have seemed erotic in a more buttoned up era, but to modern eyes, they're overacted. still, she must have titilliated the audiences  of 1921 who thought vamp was sexy. Why doesn't Morhange respond ? In France, he had decided to take holy orders as a monk, but the Abbott told him to return to Algeria first, to test his destiny. Hence the crucifix and beads (not a rosary) he wears, which is not standard uniform. To get revenge, she feeds Saint-Evit narcotic cigarettes and gets him to smash Morhange's skull with a silver hammer. Yet Morhange forgives him, as Christ did.  The original novel, by Pierre Benoit, would have appealed to audiences brought up on Catholic morality. Rejection makes Altinea mad with grief: she sees crucifixes shining everywhere and lets Morhange be buried according to his own religion.   Luckily for Saint-Avit, he's been befriended by Tanit-Zerga, Altinea's assistant, who wants to escape and return to her home  in Gao, from which she was taken in a raid by slavers. She arranges a camel, and the two make a plucky escape, aided by Cegheir ben Cheik.  In the desrt, though, their camel dies, and when they reach a well, it's dried out. Tanit-Zerga dies, with a mirage of Gao in her mind. Thus we return to the beginning, when Saint-Avit was found, lost in the desert.  But, like Morhange and others before him, the spell of Altinea haunts him, and he wrangles a posting back to the desert, knowing full well that he is compelled by some unknown, irrational force.
at July 15, 2020