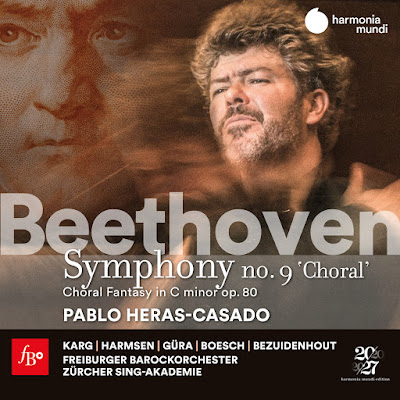 Beethoven Symphony no 9 "Choral" in D minor, Op. 125, and the Choral Fantasy   in C minor op 80 with soloist Kristian Bezuidenhout, Pablo Heras-Casado conducting the Freiburger Barockorchester, new from Harmonia Mundi.  In this Beethoven anniversary year, it is good that there are ventures which probe more deeply into the composer and his music. The year started with reconstructions, in full performances concerts throughout Europe, of the concert of 22nd December 1808, in honour of the composer, in Vienna which included the Fifth and Sixth symphonies, concluding with the Choral Fantasy providing a grand finale, Beethoven himself playing  the piano part.  Perhaps it says something about the stamina of modern audiences that some could not understand the ambitious scale of the programme. The Choral Fantasy is in many ways the embryo of  Beethoven's Symphony no 9,  now an anthem of hope and unity, all over the world.

Although the Choral Fantasy wasn't successful at the 1808 concert for many reasons, it is hardly a neglected work. The Adagio begins with a substantial section for solo piano, for this is very much a piece for piano, supplemented by orchestra and voices.  The familiar "Ode to Joy" motif is introduced first by the piano, then elaborated by different sections in the orchestra.  A concerto, in effect, the piano very much part of the evolution of the whole. Not for nothing is the Choral Fantasy in the repertoire of many fine keyboardists.  Kristian Bezuidenhout on fortepiano is complemented by the Freiburger Barockorchester, whose period sensibilities enhance finer textures and a "personality" in the approach which feels more intimate and direct, very much in keeping with the idea of individuals interacting as individuals, gradually building up towards communal expression.  Just as in the Choral Symphony, the choir and vocal soloists in the Choral Fantasy enter only in the final Allegro, which has been purposefully reached as a result of what has gone before.

The character of these performances make this new recording a strong recommendation even in a market saturated with Beethoven Ninths. The vivacity and vigour of the Freiburger Barockorchester works extremely well with this symphony, given its fundamental message. "Alle Menschen werden Brüder" was a radical concept in the context of its time, when authoritarian regimes were giving way to new ideas, which included the freedom of the individual, and the right to tolerate self-determination.  It is significant that Beethoven replaced the text used in the Choral Fantasy (by Christoph Kuffner) celebrating the harmony of Nature where "Nacht und Stürme werden Licht" with the even more explicit Friedrich von Schiller Ode to Joy.

Beethoven's Symphony no 9 perfectly captures the revolutionary spirit of the Romantic era, and of the ideals Beethoven held so deeply.  What would Beethoven, Schiller and their contemporaries think of modern societies where such values seem to be in retreat ?  While this symphony is expressive with the full blast of a large modern orchestra and massed voices,  the Freiburger Barockorchester, with their appreciation of the more intimate soundworld of Beethoven's time, also bring out the human scale and personal warmth in this symphony. The power of this piece lies in the way Beethoven uses individuals to create a greater creative whole.  The Freiburger Barockorchester have also recorded a superb Beethoven Leonore (the 1805 version of Fidelio) with René Jacobs, livelier and more spirited than John Eliot Gardiner, emphasizing the originality of Beethoven's writing for the two female roles, who are much more developed than in the 1814 version. It is essential listening. The Freiburger Barockorchester have recently released a new recording of Beethoven's Piano Concertos no 2 and 5 "The Emperor" also with Kristian Bezuindenhout and Pablo Heras-Casado.

The superb playing of the Freiburger  Barockorchester is enhanced by Heras-Casado's direct, vivid style, and by the quality of the soloists,  Christiane Karg, Sophie Harmsen, Werner Güra and Florian Boesch.  Their voices are exceptionally well-balanced, and operate in consort with each other, which is also part of underlying meaning. Not a weak link here, as is sometimes the case with lesser performances.  The choir is the Zürcher Sing-Akademie, also very rewarding.