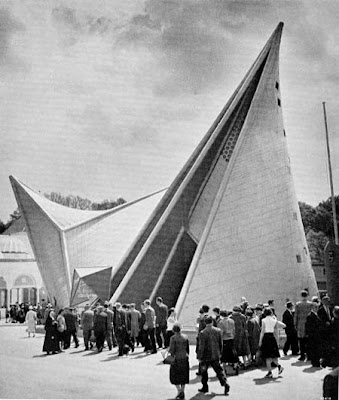 Think back to the Brave New World of 1958, after grim years of war and austerity. Philips, the then technology giant, wanted to dazzle the postwar world with the ultimate in artistic modernity. Thus Poème Électronique was conceived. It was an amazingly ambitious, visionary venture : it’s hard to imagine what an impact it made on audiences then who weren’t used to techno anything, far less an extravaganza of electronic music and visual effects in a building that looked like something from a sci-fi movie

Le Corbusier wanted to create a Gesammstkunstwerk. As an architect he understood how people experience space and fill it with sight and sound : Poème Électronique is a concept that juumps straight off the theoretical draftboard into reality. That's why he threatened to quit altogether if Philips wanted to drop Edgard Varèse. The whole point, for Le Corbusier, was that Varèse, neglected and frustrated, represented the new frontier, mixing technology with art.

Looking back on 20th century modernism , that's a trend that keeps recurring from the Italian Futurists to Fritz Lang's Metropolis, and George Antheil's Ballet Mécanique. But the Philips Pavilion was a multi-dimensional experience on a huge scale, where vistors and space were part of what was happening. Thousands filed through the Pavilion, herded almost like animals, through corridors in which they were bombarded with bizarre sounds, flickers of images blasted so quickly they hardly had time to absorb them. In 1958, before most people even had TV, this was amazing. No way would a multinational today even dare consider something so adventurous.

There's plenty to read, even diagram by diagram plans of how the pavilion was built. Here is a clip of what folks in 1958 saw :

What a succession of images! And how strange they must have seemed to people who still watched movies in black and white. And how shockingly prescient - multiple Hiroshimas, right in the middle of the Cold War.

A lot of fuss is made over who did what and when in the development of the Philips Pavilion project. But such nitpicking misses the point. Architects, unlike composers, can't work on in isolation. Moreover, Poème Électronique was a fusion, not merely a series of events. As Xenakis himself said, there was an alternative son et lumiére installation Philips wanted to use, but it just didn't work in quite the same way.

Although Varèse didn't see the pavilion before he wrote the music, he understood the concept of sound being created as part of an environment. This idea – which dates from the Middle Ages – is very much live today. Think Stockhausen's sculptures in sound like Cosmic Pulses (Proms 2008) or "architectural" music built for specific spaces. Think Simon Bainbridge, Magnus Lindberg, Luigi Nono, where performance space is part of the experience. The images were projected onto the fluid lines of the building, the sounds adapting to the acoustic.

Furthermore, although Xenakis only wrote a short prelude before Poème Électronique, he designed the structure of the pavilion on principles that relate mathematics, architecture and music. In 1955, he'd written Metastasis, distinctive for its glissandi that shoot upwards and outwards like arches. He said "If glissandi are long and sufficiently interlaced, we obtain sonic spaces of continuous evolution. It is possible to produce ruled surfaces by drawing the glissandi as straight lines. ... my inspiration (for the Philips Pavilion) was pinpointed by the experiment with Metastasis". He goes on to show, via diagrams, the causal chain of ideas which led him to formulate the architecture from his earlier piece of music. The music grew from architecture and vice versa. It's way of thinking in pliable shapes.

This is why Poème Électronique is still significant after 50 years. Varèse never had the facilities which IRCAM, computers and modern electronics gave those who came after. But like a wild and woolly John the Baptist, he showed the way (See a wonderful 1920's arty shot of him by clicking on his name in the labels list on right). Conceptually, Le Corbusier, Xenakis and Varèse are still in the vanguard, their achievement still not fully understood. Follow the labels list on tight - lots on the architecture and music interface, Xenakis etc.

Really interesting stuff, such a fascinating & ambitious project! Really glad to be able to see the video, what a bizarre collection of images! It must've been pretty strange back in '58!

We've actually just done a podcast about Varese & his music, and made a fleeting reference to the Pavilion; so we've linked up your site so hopefully people can find out a little more detail, and see a picture! We're at http://www.technicallyclassical.com
Hope it's of interest!