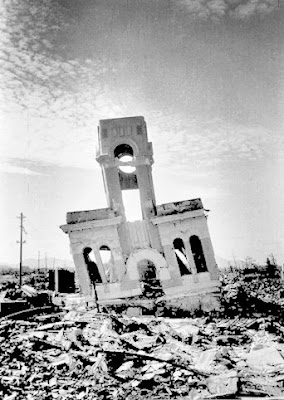 To say that Dr Atomic landed in London with a bang is shocking, but the subject it deals with is meant to be disturbing. Unlike the scientists at Los Alamos, we can't live in denial of the wider implications of their work. This isn't history. It's a universal dilemma, as relevant now as it was in 1945.

On the surface, there’s little overt action. Oppenheimer and his colleagues stand about talking, but therein lies the drama. Remember “Waiting for Godot”. The angst is existential, directed inwards. There is no overt commentary in the libretto, either. Instead, texts are taken from documents and letters of the time, presenting evidence without explicit judgement, for there are no easy answers. The words hang in limbo, like the photograph of the wall in standing amid the rubble, a mute witness to horror.

If the action drags at first, it recreates the suffocating atmosphere at , which is central to the drama. It's hard to express tedium without being tedious, but Adams takes the risk because it contrasts the banality of the scientists musings with the savagery of what they are about to unleash. Someone said (Hannah Arendt?), that evil grows from the mundane. This frustration the scientists feel is supposed to spur us to question. Perhaps it isn't theatre as we're used to but Adams is making an interesting conceptual leap forward.

How do scientists, men of reason, get caught up in barbarity ? Oppenheimer himself was an educated, civilized man who was later persecuted for his political beliefs. The scientists on the project didn’t know the full consequences of what they were doing and were in denial. Audiences at Dr Atomic have images of and the Cold War seared into their memories and cannot escape.

The lyrical episodes builds into the opera are essential to the whole meaning of the opera. Oppenheimer quotes Donne, Baudelaire and other poetry. It’s an escape to a more ideal world, but he’s deeply conflicted. The song “Batter my heart” is Ground Zero in this opera, utterly pivotal and beautifully written. Gerald Finley sings it with conviction, and doesn’t flinch from its irony. “Reason….me should defend, but is captived, and proves weak or untrue”. It’s so powerful that it would obliterate anything that followed. We leave the first act stunned, to ponder it in the interval.

Perhaps the secret to this opera is not to expect action from the words, but from the music. Orchestrally, this is surprising rich and beautiful, the choruses in particular well supported. The ENO chorus and orchestra have performed Adams before, most recently Nixon in China but this isn't traditional repertoire, so they deserve credit for achieving such good results. Lawrence Renes conducted the European premiere of the original staging at Der Nederlandse Opera in 2007. Experience shows.

This production, by Penny Woolcock, who directed the Death of Klinghoffer film, makes much of the Teva Pueblo. Just as the scientists do the bidding of politicians, the serve the scientists. But they observe, they are the conscience of nature. The production starts with a wall of photographs showing the scientists formally posing, as if for mug shots. Later, they are replaced by , standing in the cavities of the wall, as if in a massive canyon. They sing from the Bhagavad-gita, prophesying doom. “Your shape stupendous”, they repeat, to booming percussion, “All the worlds are fear struck”.

Special mention should be made of Meredith Arwady’s dark contralto, seething suppressed passion. Pasqualita is a small part, but essential. Kitty is too distressed to mother her baby, but Pasqualita nurtures.

The final scene is overwhelming, as it should be. The orchestra builds up to a harrowing climax, rolling thunder as it the skies were rent asunder. As the cast stare upward, transfixed, the bomb explodes. The whole auditorium is bathed in unearthly yellow light. This is what “awesome” really means – it is magnificent as theatre. But lest we be too impressed, the voice of a Japanese woman cries out for water. All that power, all that knowledge, was to be channelled for destruction.

Superb singing from Gerald Finley who has made Oppenheimer his speciality, and also from Brindley Sherratt who was impressive recently as Pimen in Boris Gudonov. Sasha Cooke characterizes the brittle Kitty well. The whole cast is strong but chorus and orchestra ground the production with firm purpose. The ENO has long had a reputation for choosing innovative and challenging work : this Dr Atomic epitomises what the ENO stands for.

More to come soon, and production pictures, too.
http://www.operatoday.com/content/2009/02/at_covent_garde.php

This post, coupled with the excellent one that preceded it, makes me wonder if Woolcock tinkered a bit with her production.

In any case, your background clearly gives you a special perspective on the piece, and I'm glad to hear it resonated so strongly. While I wasn't quite as taken with it when it was at the MET, I do feel that Adams has done something significant.

Hi Bruce ! The house was packed, only a few left after first actt, most people seemed keen. Colin and I had a great time ! See Bruce's comments on the NY Met performance by following link on labels list on right.