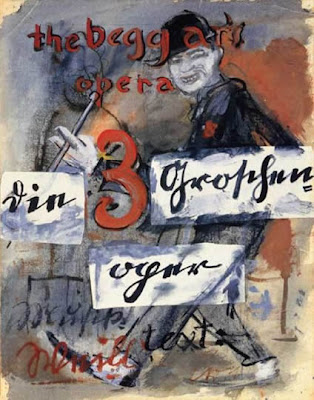 Ian Bostridge traded his fey haircut for a slicked-back Kray brothers look, complete with wrap-around dark glasses in this Dreigroschenoper at the Barbican 13.6.09. Bostridge’s lean frame was just right for Macheath, the sleazeball who always manages to slip away uncaught. MacHeath oozes, like slime, his lines replicated in saxophone and slide trombone. So Bostridge’s lounge lizard characterization was very apt, menace concealed by an air of impenetrable elusiveness. Mackie gets away because he conceals himself, like so much implicit in this opera.
Dreigroschenoper (Threepenny Opera or 3d Opera) was first performed as part of the agit prop cabaret world of Brecht and Weill’s . The 1931 recording and subsequent film (rather too naturalistic) has defined its performance history. It made Lotte Lenya the iconic Weill personality. Dozens of singers have colonised the image since then, as if Lenya’s rough voice was a licence for bad singing. Certainly Brecht and Weill used actors rather than singers in those early years, because they were poor and their politics meant they wanted to reach audiences in clubs, not opera houses. It’s a “Beggar’s Opera” after all. But therein lies the contradiction that makes the piece so interesting. It masquerades as cabaret theatre, but it’s actually quite sophisticated musically. Just as Brecht turns the 18th century John Gay play on its head, Brecht turns musical genres upside down. The rousing Finale is a Bach Chorale in disguise. This performance was conducted by HK Gruber who also sang Peachum, “the poorest man in the world” who is also The King of the Beggars (another contradiction). Gruber can do sardonic irony better than anyone else, so his approach to 3dO is in a whole other league from the usual straightforward “entertainment” mode. Beneath the cute tunes, Brecht’s message is savage: all the world’s a stage and a mad one at that. So Gruber ropes in Klangforum Wien as his “orchestra”. They are one of the best contemporary music ensembles around and can do “difficult” anytime. Here they are playing banjos, guitars, saxophones and rinky tink piano. And Vienna's Chorus sine nomine, who can do perfect pitch enough to sing with tuning forks, get to do “backing vocals”. Proof of this musically astute approach are the soloists. Luxury casting this: Angelika Kirschlager sings a brilliantly saucy Jenny, slinking like a snake, a perfect partner to Bostridge’s louche Mackie. Dorothea Röschmann’s usual sweetness is here laced with poison – she can act as well as sing. In this performance Polly sings Seeraüber Jenny, not Jenny herself. This works well, because it adds another level of musical cross-dressing More good performances from Florian Boesch as Tiger Brown the dodgy cop and Cora Burggraaf as his daughter, Hanna Schwarz as Mrs Peachum, a coloratura foil to Gruber’s burlesque Peachum. His lines are half speech, half ham, so having a proper singer as his wife is a telling contrast. There’s plenty of proof as to the value of proper voices in Weill. Lotte Lenya was the Tracey Emin of her time, and a sledgehammer persona was probably needed to bring Weill success on Broadway. If the public persona of Brecht and Weill was a caricature, their real message could be packaged in a less overtly political way. In the former , socialism wasn’t scary, so there was nothing to prove or defend. Thus the DDR Weill performance tradition diverged from the Lenya model. Weill and Eisler were performed by “real” singers like Gisela May and, of all people, Peter Schreier, consummate Mozartean, Bachophile and Liedermeister. These are the recordings to seek out. You can actually hear the words, enunciated with the same precision as there is in the writing. Because Lenya dominated the western market, we’re been persuaded that hers is the only way to do Brecht, and we’re rewarded by pop stars and amateurs who are fun, but not necessarily best placed to reveal the real Weill. Further proof still: here is a clip of a singer doing Seeräuber Jenny in 1931, in French, and almost exactly at the same time as Pabst was filming 3dO in with Lenya, who significantly sings one song only. Margo Lion worked in cabaret but she could actually sing. Lenya scores though for shock value quirkiness.
And even more proof. The ensemble work is extremely tightly written, and takes dexterity to carry over with panache. Especially good was the Kanonen-song, where Bostridge and Boesch bounce off each other with military precision. Here’s a clip of Ernst Busch (as Mack) and Kurt Gerron as Tiger Brown (in military gear). Wonderful – Busch’s sharpness and quick wits serve him well. He’s almost unrecognizable in smooth suit and bowler hat, but that’s the man who spent the war in Nazi KZ’s.
at June 14, 2009