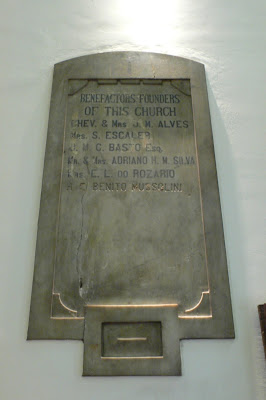 Click on this image to enlarge and read the inscription. It lists the benefactors of St Teresa's Church in Kowloon, Hong Kong. Most of the benefactors are famous Macanese (ab out whom books should be written) but look at the last one – Benito Mussolini ! (the inlay has been ripped out)

Il Duce himself. He provided a huge amount of money to endow the church when it was built in 1932. The area around the church was very up and coming at the time, one of the areas where the Macanese community lived. Opposite was Maryknoll Convent School, built around the same time. Both were sturdily built in 30's style, the church with an Italianate tower and portico. 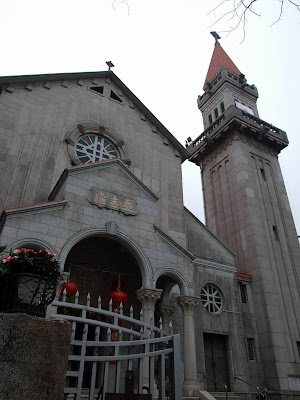 .
The legend was that when the area became populated, there wasn't enough money for the ambitious project, but one of the priests in the diocese had a personal link to Mussolini, and the money appeared. It was not Italian government money but a personal donation. One of the possibilities is that Count Ciano, Mussolini's son in law was in China at the time doing deals with the Quomindang. Hong Kong and Shanghai were more conducive to his playboy lifestyle (Jiang jieshi was a bit of a prude) so when he came to HK, someone prevailed upon him to help raise funds for the church.

The Mussolini connection helped when the Japanese invaded Hong Kong in 1941. Maryknoll convent school across the road became a field hospital, later where Japanese casualties from China and South East Asia were sent to recover. The houses around the church, villa style in the westernized South China style, were occupied by Japanese officers, which protected the buildings from being looted. The church was not affected, because Italy and Japan were allies.

Nonetheless, the parishioners were involved in the anti-Japanese resistance, and knew which of their parishioners were.  After the massive swoop down on the HK resistance in June 1943,  (mass executions, hurruied escapes) things became difficult.  At the end of 1943, several priests from this parish, including the formidable Father Carmelo Orlando (1907-79) had to be smuggled secretly out of Hong Kong. to Macau, in a boat. Father Orlando was a Sicilian who spent his whole career in China, a feisty, fiery fellow you wouldn't want to cross. After the war, the Mussolini link was embarrassing, so pressure was brought to bear, and the large marble plaque in the main nave near the entrance was removed. Father Orlando is supposed to have insisted that whatever Mussolini might have done, the fact remained that he had given money to save souls in China. So Mussolini's name was added to the smaller plaque in the photo, which is further up the wall, not noticeable unless you know where to look.

St Teresa's Church is now dwarfed by flyovers and multi-storey buildings, quite different to the wide, empty streets of the 1930's. But it's still a busy parish because there are lots of Catholics around. There's a video somewhere of Priscilla Yu Min, the actress, a very devout Catholic,  getting married here in the 1960's. Father Orlando officiated. It's an important clip because this was before people had camcorders, so there are few records of "live" in church. Fortunately for us, because she was famous, film crew were on hand.

Chevalier and Mrs Alves were prominent business people, I think they also funded Rosary Church, though that was endowed by the Prata family in 1905.  (One of the Alves daughters married Prata, so it's true it was Alves money that paid for Rosary Church)
Photo credit : Chong fat
at August 07, 2009

Thanks for this. Very interesting little connection. I live opposite the church and have been thinking about visiting, but have never got round to it.

Pop in one day ! I wish I could again. Tell me when you do, I miss the place. Is the grotto at the back still there ? And the wax Jesus embalmed in a glass case ? (which used to scare me). By European standards St Teresa's is no big deal but in terms of Hong Kong History, it's an important place. Lots of famous people baptized, married and first communioned here. In fact there is even a clip of Priscilla Yu Ming, the actress getting baptized by Father Orlando somewhere on the net. Also some clips on youtube, including a wedding in a movie. They used to film a lot on Prince Edwatd Road and Argyle Street before the traffic and flyover. PLEASE tell me about it when you visit, the place is full of memories for many people. This is Hong Kong Heritage.